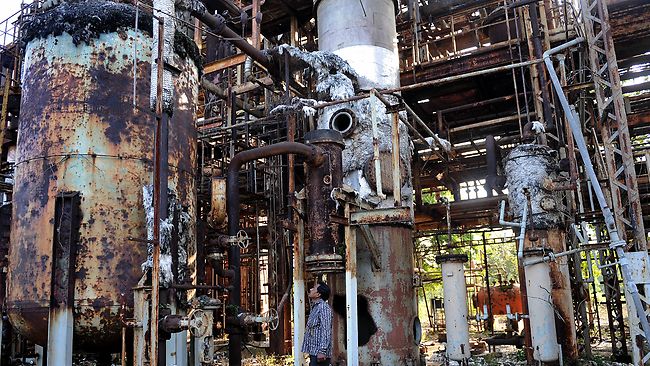 At the World of Matter symposium this past September, I introduced a panel of graduate students — my colleagues — presenting papers under the heading of “postcolonial ecologies.” The presentations emerged from a seminar of the same name, led by Ashley Dawson at the Graduate Center in spring 2014. Broadly speaking, the course was meant to investigate the dynamics of ecological imperialism currently shaping the politics and practice of everyday life throughout the formerly colonized world. In their presentations, my peers touched on several themes that we developed during our seminar.

What follows is a loose synthesis of some of the thoughts and questions that helped to shape our panel, as well as a few that emerged from my own reflections on the day’s presentations. My aim in circulating these notes is twofold. First I hope to provide a bit of background, some insight into the kinds of thinking that our seminar produced and a frame for my colleagues’ contributions to the World of Matter symposium. Second, I hope they might serve as provocations for an ongoing discussion of radical materialism, understood here as a political project, an intellectual and aesthetic practice, and an idea-in-formation. Radical materialism has been described in the literature around this symposium as a multidisciplinary frame through which to “scrutinize zones of geopolitical-ecological upheaval” by reconsidering the nature and impact of human interaction with the material world. As an attempt to reorient materialist politics toward a politics of matter itself, radical materialism has the potential to extend our understanding of modern ecological imperialism, and thus also the stakes of global solidarity, in a number of important ways.

The space-time of environmental imperialism As political thinkers we are invested in historically and geographically mapping the uneven impacts of resource extraction, dispossession, and what might be called postcolonial ecologies more broadly. This requires rethinking conventional definitions of violence alongside a constant negotiation of the interlocking dynamics of time, space, and scale.

A central question that arises in the study of postcolonial ecologies is the relationship between colonial pasts and postcolonial presents. This is also the focus of Imperial Debris, which, drawing on Benjamin’s allegories of destruction, advances “ruination” as a discursive strategy for interrupting linear approaches to the time-space of imperial projects. Echoing the notion of self-reproducing “plantation geographies” advanced by geographers like Katherine McKittrick, colonial ruination is an active process that contrasts the static and universal meaning assumed by references to a “colonial legacy” or the “vestiges of empire.” It pulls the past into the present, revealing its intransigence in the contemporary dynamics of imperialism and racial capitalism, and in the hunger, sickness, and poisoned environments that persist long after formal structures of colonial domination and enslavement are dismantled.

An analysis of postcolonial ecologies requires engaging with the everyday dynamics of ruination and resistance. One of our main concerns has thus been identifying the various points of connection between broad geopolitical systems and the many diverse local struggles that shape, and are shaped by, these larger processes. Again this entails challenging conventional definitions of violence by considering the multiple scales and temporalities across which the cruelty of ecological imperialism plays out. The distribution of fallout from industrial production, global waste economies, resource extraction, and nuclear proliferation is, as we well know, wildly disproportionate. Some of its most pernicious effects are buried too deep to see, in our atmosphere and under our own skin. Rob Nixon refers to this as a kind of “slow violence,” one that is so geographically and temporally dispersed that it generally escapes classification as violence altogether.

We must also give attention to the multiplicity of strategies that have emerged in response to this slow violence. These range from the everyday techniques of preservation and perseverance, to the spectacular displays of oppositional politics, to the creation of alternative visions and the making of worlds. With this in mind, I suggest that engaging meaningfully with the kinds of ongoing and invisible violence that span time and space, that may incite diverse modes of opposition while also precluding political organization, is one of the most challenging and urgently necessary tasks facing radical materialism as a new direction for political thought and analysis. Too often environmental politics is framed by conceptions of “nature” and “society” as separate and oppositional spheres. As an endeavor to save some notion of “pristine nature” from the contaminating effects of late capitalism, environmentalism has become intimately intertwined with neoliberal strategies of accumulation. One of our aims in the Postcolonial Ecologies seminar was to disentangle the endeavor of activist public discourse from the bourgeois logics of “sustainability” and “preservation,” which often serve as ideological underpinnings for the privatization of land and resources — what has been referred to as a modern enclosures movement.

To do this we look to the complex relationship between human and non-human life, especially those that link geographies of labor and social difference with economies of resource extraction, commodity circulation, and environmental preservation. Nixon calls this the “politics of the poor,” a position which considers planetary survival in the long-term sense as necessarily entwined with everyday struggles around dignified social reproduction and livelihood. Notions of environmentalism that are linked with poor peoples’ struggles offer a powerful corrective to the dominant Western mode of corporate preservation. However, to uncritically imbue poor peoples’ day-to-day struggles with an innate environmentalist logic risks glossing over the complex links between labor, ecology, and dispossession.

caste and class dynamics of Indian environmental movements. Both locally and abroad, Baviskar points to oversimplified—and often unfounded—portrayals of Adivasi tribes as inherently conservationist, the ideal environmental resource-managers. By ascribing them the role of “ecologically noble savage,” Adivasis are revered for their low-impact livelihood while at the same time denied the right to seek material gains that could ameliorate their impoverished conditions.

The Politics of Representation

How might innovative approaches to representation foster a new kind of understanding; one that can help to build new and meaningful political formations? Whatever our chosen medium, a critical analysis of the politics of representation and subjectivation must constantly inform the development of collective projects as well as a radical materialist sensibility in general. Text, image, and sound are threads that can connect seemingly disparate spaces and historical moments. Telling the story of matter can indeed contribute to a multi-scalar analysis of truly trans-local and trans-historical issues. However the political viability of this approach depends on constant self-examination and awareness of the potential pitfalls. How can we push the limits of representational forms such that the act of bearing witness can contribute to the production of global and trans-local solidarity networks, and to the making of entirely different political worlds?