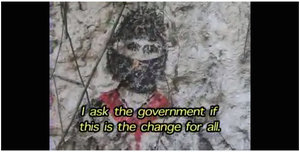 The global politics of resource scarcity is a chief theme of World of Matter’s practice, but another scarcity is evident too: a scarcity of representations by Indigenous and subaltern people, whose resources have been most exploited, first by colonialism and the dispossession of their land, then by the neocolonialism of the global economy as it was reconfigured after World War II. This representational scarcity, as it were, is partly due to who the World of Matter artists and media makers are — primarily Europe-based, with a few exceptions — and partly (and more significantly) due to the sedimented legacy of settler-colonial modes of knowing and control, which denied cultural and aesthetic sovereignty as much as political sovereignty. There is a long, multifarious history of thought on this legacy vis-à-vis contemporary art and media practice, and strategies for subverting it were the subject of a Social Text dossier in 2013 on “Decolonial AestheSis.”

In assessing the work of World of Matter, however, I turn to the methodologies of refusal theorized by Indigenous and allied scholars such as Audra Simpson, Eve Tuck, and K. Wayne Yang in order to resist the settler-colonial imperative to know. Simpson, for instance, has renewed attention to the “interlocutionary role” of anthropology, colonial governmentality, and liberal polities alike to speak for and represent Indigenous people, and Tuck and Yang, building on Simpson (and Spivak’s foundational work), have argued for desire-based accounts of Indigenous struggles instead of damage-centered ones. Tuck and Yang summarize their intervention by way of three axioms:

(I) The subaltern can speak, but is only invited to speak her/our pain;
(II) there are some forms of knowledge that the academy doesn’t deserve; and
(III) research may not be the intervention that is needed. (224)

In both cases, Simpson and Tuck and Yang are speaking back to the disciplines of the social sciences, but their interventions apply to the humanities as well, especially the discipline of literary studies, which fully incorporated the interlocutionary role after the linguistic turn, and to representational practices at large, whether in the form of literature, journalism, visual art, or the mixed-media genres of World of Matter. In other words, what if, as artists, makers, or scholars, we refused the legacy of the settler-colonial gaze — as the fields of settler-colonial studies and Indigenous studies at large, with their foundational distinction between settlers and “natives,” ask us to do — and centered Indigenous and subaltern self-representations instead? On this question, the media production of the EZLN/Zapatistas provides a strong contrast.

Befitting its name, World of Matter spans the globe, and the aesthetic strategies of its various contributors are equally diverse. But if the collective aim, broadly understood, is to make visible a range of aspects of the global economy that are generally occluded — an aim the project achieves quite well — it’s important to see what kinds of local subjectivities are represented. In this regard, it’s generative to consider the two works, both by Uwe H. Martin, on the contemporary political economy of cotton — White Gold: Texas Blues, set in the titular US state, and White Gold: Killing Seeds, set in the Indian state of Maharashtra — and the differing experiences given voice. Indeed, both works are series of video interviews with individual subjects, so the issue of voice is foreground.

The first video in the Texas-based work, with two white farmers, exemplifies the differences. At nearly five minutes, it’s significantly longer than any of the videos with farmers in the Maharashtra-based work; further, and partly because of its length, it represents a greater range of experience and affect than the videos in the Maharashtra series. So while, in the first thirty seconds of the video, the Texas farmers — a married couple — say the current cotton economy is “killing us,” by the second half of the video, despite describing the challenges they face, they say farming has been a “good way to raise our family,” that, overall, “it’s been a good life,” and that, in the quote that closes the video, “we’re still here — it could be worse.” Finally, they speak of the ways they’ve been able to keep their “heads above water,” such as the wife working a full-time secretarial job “in town” and the government subsidies they receive, and how their personal situation is embedded in the politics of the US economy.

In contrast, the first video in the Maharashtra series focuses on death — not metaphorical, as in the Texas work, but literal. Titled “Farmers Funeral” (sic), the video begins with an image of flames, and the sound of crackling; after a moment, the camera zooms out to an image of a funeral pyre, and then zooms out again to a shot of the crowd gathered around the pyre. The next shot is a close-up of a woman’s face in tears, which she wipes with her head covering. No voices are heard — a marked difference from the opening video in the Texas series.

The subsequent videos in the Maharashtra series maintain this doleful mood, as the so-called “suicide” economy of Indian agriculture is further elaborated. Unlike in the Texas work, there’s no discussion of solutions — do the farmers receive government subsidies, for instance? Can the farmers’ wives work full-time jobs? Why or why not?—nor any representation of resistance struggles, nor, further, any sense of joy in contrast to the suffering presented. We don’t even know if the farmers and their families themselves call this a “suicide” economy, a phrase that isn’t specific to the phenomenon of Indian farmer suicides but rather a generic name for any upsurge in suicides that can be ascribed to economic pressure (such as “the Great Recession” in the global north of recent years) — though, notably, the phrase isn’t applied to the Texas cotton economy in White Gold: Texas Blues. Indeed, the phrase would seem to be yet another export of the global north to the global South, much like the seeds and fertilizers cited in the videos. Overall, the Maharashtra series fairly accedes to the settler-colonial gaze, while the Texas series avoids it, not least because the historical present of the US’s colonization of Texas isn’t addressed — an absence matched by the absence of Mexican-American, Mexican-migrant, and undocumented voices on the Texas cotton economy.

In comparison to both of these World of Matter series on cotton, the EZLN/Zapatista video “The Land Belongs to Those Who Work It” (2005) begins with festive music and lyrics that pointedly foreground the Mexican state’s politics: “I ask the government if this is the change for all, Dislocating entire villages of this nation, And the promises they left turned into treason.” Then the video cuts to a shot of the land, and people’s habitations. The central scene is a face-off between the Zapatistas, on their land, and Mexican bureaucrats, or outsiders — a face-off in which the Zapatistas reject all of the bureaucrats’ arguments for why the Zapatista land should be taken, and, instead, express their own arguments for why the land is theirs. Altogether, the video merges three dynamics: a range of emotion, including joy; a resistance struggle; and a denial of the state’s political discourse. That is, the video documents the refusal of the Zapatistas to submit to the state, in a media form that itself refuses representational practices from above.

Alexandra Halkin, one of the people who helped train the Zapatistas in video-making, has written that “we were all aware of the pitfalls of bringing in temporary ‘outsiders’ to do the training, particularly as ‘instructors.’ Bringing in people from outside of Mexico would not work from either a sociopolitical or economic standpoint — we did not want to replicate the colonial model. With very rare exceptions, all of the introductory video and computer workshops the first two years were taught by either indigenous video makers from Oaxaca or by Mexican Chiapas Media Project/ProMedios staff.” And it’s important to note both the English translation of the project’s full name — Media in Support of Community Communication — as well as the collaboration’s end upon completion of the training.

Indeed, as Halkin further notes, “this media presence was not a by-product of the Zapatista struggle; rather, the Zapatistas initiated and directed this international media presence, recognizing their dependence on outside (both mass and independent) media for visibility, for a degree of protection, and for leverage. The Zapatistas understood the power of their story; what was lacking was the means of transmitting that story themselves.”

The Zapatistas, of course, managed to hold on to much of their land and remain autonomous and, thus, are a well-known example of resistance to capitalism and resource extraction. What if media makers gave resources back to other resistance movements in the form of media training, so that more Indigenous and subaltern people could transmit their own narratives? And how might such self-representation translate into political representation — or an end to the liberal-democratic system of representation altogether? These are open questions, but any concern for the scarcity of material resources — of matter — should be matched with a concern for the scarcity of Indigenous and subaltern cultural production in the global economy, a scarcity that, too, is a legacy of colonialism.

A former journalist, Sean M. Kennedy is a PhD student in English at the Graduate Center of the City University of New York, working on questions of global political economy, decolonization, and cultural and media form. He holds an MFA in creative writing from Rutgers University–Newark, a BA in English and modern studies from the University of Virginia, and teaches at CUNY’s Medgar Evers College. His dissertation is an interdisciplinary study of global gangster culture under late capitalism, with a particular focus on Mumbai, Johannesburg, and New York City.