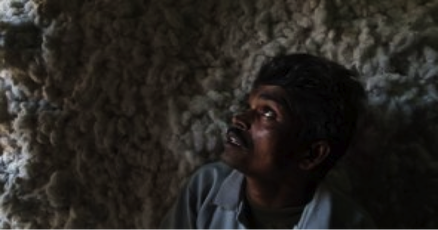 The World of Matter is an “international art and media project [whose collective works critique] the global ecologies of resource exploitation and circulation.”[1]See www.worldofmatter.net WoM artists take to task such instances of exploitation as Monsanto’s “white gold revolution” — a euphemism for an agricultural program that extols the gospel of free trade, and which has resulted in the suicides of approximately 270,000 farmers owing to the proliferation of debt in states like Vidarbha.[2]Center for Human Rights and Global Justice, Every Thirty Minutes: Farmer Suicides, Human Rights, and the Agrarian Crisis in India (New York: NYU School of Law, 2011).
Evincing what the collective calls a “new form of representation” — a departure from the usual “market-driven” discourse — WoM artist Uwe Martin’s White Gold: Killing Seeds is a stunning example of their work.[3]Ibid. Along with journalist Palagummi Sainith’s 2009 documentary Nero’s Guests and Amitav Ghosh’s picaresque Ibis Trilogy (2008, 2011, 2015), White Gold: Killing Seeds is a critical intervention in an otherwise laudatory story of India’s “shining economy,” and the role of agribusiness in its prosperity.

Popularly characterized as a panacea, seed initiatives like Monsanto’s Bt cotton[4]Bacillus thuringiensis (Bt) cotton is a genetically modified variety of cotton produced by Monsanto (http://www.monsanto.com/pages/default.aspx) have in fact replaced a sustainable agricultural model with “free” trade schemes that produce debt where once was food; debt that is responsible for what Vandana Shiva calls a “suicide economy” owing to the number of suicides in regions like Vidarbha. She later suggests that the term “genocide economy” is a more fitting description — “suicide” both obscuring the economic causes of the act and further reifying the invisibility of such instances of slow violence as Monsanto’s “revolution.”

This is the thrust of White Gold: Killing Seeds, which begins with a thirty-three second video of a farmer’s funeral — the sound of slowly burning wood offering what Martin calls one of “multiple entry levels.” The remaining ten films include interviews with farmers in Vidarbha, labor activists, and even an anonymous moneylender. Indeed, multiple points of entry are cultivated to trouble an otherwise myopic (and neo-Malthusian) understanding of industrialized agriculture in rural India.

This too is the tenor of Palagummi Sainith’s 2009 documentary Nero’s Guests, which works on a slightly different register. The sound of a typewriter — an indication of the journalist’s position — opens the film, which ultimately closes with a statement about complicity by the viewer who is now a proxy for the consumer. Sainith’s film is a searing indictment of government (and public) complacency in the face of India’s agrarian crisis and the farmer suicides in Vidarbha. Shot in Vidarbha and Nagpur, and also Delhi and Mumbai, the film closes with a fable: Sainith tells the story of the burning of Rome — Nero’s grotesque burning of bodies “to provide the nighttime illumination…for [Rome’s] intelligentsia.” Sitting amongst university students while the camera outside pans the bright city lights of Mumbai, he then beseeches his audience “not to be Nero’s guests.” Like Martin, Sainith exposes the violent nature of such neoliberal schemes as “free trade,” quipping that the “dream of the Indian farmer is to be born a European cow” — this unwitting creature being the “most food secure being on earth” while farmers in the state of Maharashtra, who grow its food, are killing themselves at “a rate of six to eight” per day.[5]Nero’s Guests. Dir. Palagummi Sainith, 2009.

Both works achieve a particular resonance—image and sound working against the flat representations of our capitalist ambitions in venues like The New York Times wherein stories mourn those who were “left behind.” Their work establishes a point of departure that is taken up by artists like Amitav Ghosh, whose literary renditions of the region similarly disrupt dominant modes of representation. His Sea of Poppies (2008) and River of Smoke (2011)—the first two installments of his Ibis Trilogy [6]The final novel, Flood of Fire (2015), is to be released later this year. — likewise take up the question of free trade and large-scale agricultural enclosures, albeit during an earlier historic period.

Ghosh tells a story that begins well before the 1998 World Bank agreements that decimated India’s local cotton economy. In 1765, the British East India Company acquired exclusive revenue rights (or diwani rights) on the Coromandel Coast of the Bay of Bengal;[7]See also Guha, Ranajit. A Rule of Property for Bengal: An Essay on the Idea of Permanent Settlement. Durham: Duke University Press, 1996. and Ghosh’s novels follow the inception and cultivation of what we can surely call a genocide economy through his itinerant characters — farmers, mostly from Bihar, in what was then part of the East India Company’s permanent settlement.

Both novels deploy the conventions of Rob Nixon’s “environmental picaresque” in a way that succinctly and temporally captures the nature of “slow violence” — a violence that is “spectacle deficient,” and whose effects are often incalculable.[8]Nixon, Rob. Slow Violence and the Environmentalism of the Poor. Cambridge: Harvard University Press, 2011. Dubbed “cyclonic” owing to the non-teleological (at times dizzying) nature of his narrative arcs, his novels antagonize those capitalist fictions that read Indian farmers (of poppy or cotton) as somehow “left behind.”

Literary works like Ghosh’s augment such efforts as the World of Matter initiative in representing a world of integrated and vibrant[9]See also Jane Bennett’s Vibrant Matter: A Political Ecology of Things. Durham: Duke University Press, 2010 matter, or what Helge Mooshammer and Peter Mörtenböck describe as the “complex interplay of human and nonhuman forms.” Arguably, his environmental picaresques allow for us to play with theoretical frameworks that “cultivate importantly non-optimistic relations to global capitalistic forms,”[10]Mukherjee, Pablo Upamanyu. “Water/Land: Amitav Ghosh.” Postcolonial Environments: Nature, Culture and the Contemporary Indian Novel in English. New York: Palgrave, 2010. and which render tactile the often-abstract discussion of global capital flows.

Postcolonial studies has been struggling for some time with the difficult task of representing the sorts of institutionalized violence that these projects expose — a violence that functions as the central organizing principle of places like Vidarbha, and the global south more broadly. It is a mode of structural violence spurred on by what Martin and Sainith regard as the logic of industrialized agriculture — a logic that produces “accumulation at one end and pauperization at the other,”[11]Patnaik, Utsa & Moyo, Sam. The Agrarian Question in the Neoliberal Era: Primitive Accumulation and the Peasantry. Oxford: Fahamu, 2011. and which thrives on the systematic implementation of what sociologist Achille Mbembe calls “necropolitics” (2003).[12]Mbembe, Achile. “Necropolitics.” Public Culture. Winter 2003 (15)1: 11-40. Inverting Foucault’s notion of “biopolitics,”[13]See Foucault, Michel. The Birth of Biopolitics: Lectures at the Collège de France, 1978-1979. New York: Picador, 2010. Mbembe suggests that in such zones of exception as, e.g., Maharashtra, the “ultimate expression of sovereignty [is] expressed predominantly in…the power and the capacity to dictate who may live and who must die” (16, 11). While more explicit modes of colonial commandement are suggested here — instances of spectacular genocide (e.g., the German extermination camps), which then become the touchstones for our understanding of systemic violence—I read India’s agricultural program as an exemplar of Mbembe’s thesis. Indeed, the logic that Martin, Sainith, and Ghosh critique absolutely determines “who may live and who must die.”

Without acceding to Vivek Chibber’s dogmatic disavowal[14]See also Vivek Chibber’s Postcolonial Theory and the Specter of Capital. New York: Verso, 2013. of subaltern studies on the one hand, or arguing for a sort of Rushdian real marvelous[15]See Alejo Carpentier’s definition of the real marvilloso; see also Salman Rushdie’s novels of partition and independence — notably Midnight’s Children (1980) and Shame (1983). on the other, I want to consider two conclusions from Mbembe’s prescient work: first, his plea for more tactile representations rather than post-structural traditions, which sometimes avoid the visceral experience of the postcolonial environment; and second, his argument to understand colonial time as “entangled”;[16]See also Mbembe, Achille. On the Postcolony. Los Angeles: University of California Press, 2001. as opposed to popular historiographies [17]See also Guha, Ranajit. “On Some Aspects of the Historiography of Colonial India.” in Selected Subaltern Studies. Eds. Gayatri Chakravorty Spivak & Ranajit Guha. New York: Oxford, University … Continue reading that are teleological in nature — be they market or revolution driven. The latter is magnificently captured in the Ghosh novels.

In attending to the viscera of the postcolonial environment — particularly in the context of India’s “white gold” — while resisting the teleological nature of the region’s more popular representations (whether penned by the East India Company or the New York Times), works like White Gold: Killing Seeds and Nero’s Guests are quite striking. And in displacing the hackneyed (always market-driven) claims of the green revolution, all three projects serve as a vital means of animating the often Naipaulian landscapes of our global imagination.

Stacey Balkan is a PhD candidate in English at the CUNY Graduate Center. Her work focuses on postcolonial ecologies and the politics of representation in the global south. Stacey recently published “Latin American Semiotics: Metropolitan (Im)migrants in the ‘Lettered City” in Comparative Literature and Culture (Purdue UP), and a chapter on abjection in the works of Roberto Bolaño in the Companion to Comparative Literature, World Literatures and Comparative Cultural Studies (Cambridge UP India, 2013). She teaches Latin American Literature and courses in the Environmental Humanities at Bergen Community College where she is co-chair of the college’s Literary Arts Series.