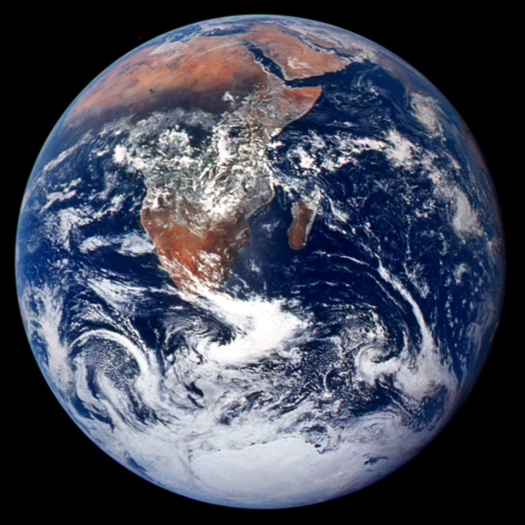 Among the most widely circulated photographs of all time is one snapped by astronauts aboard the Apollo 17 spacecraft, just hours after its launch toward the moon, in December 1972. This image, often referred to as the “Blue Marble,” captured a view of the Earth for the first time as a full, illuminated orb, floating in the inky blackness of space.[1]Four years prior, astronauts aboard Apollo 8 took a similarly influential photograph, Earthrise, from the perspective of the moon’s orbit. In this image, we see a partially shadowed Earth in the … Continue reading Its repercussions were immediate and profound. In rendering our planet as a single, visible object, seen from the outside subject-position par excellence, it simultaneously evoked (if in seeming contradiction) a sense of technological mastery and of the unified fragility of humankind. The picture was quickly adopted as an icon both for mounting environmental concern (e.g., about overpopulation, the limits of available resources, pollution) and for an ever more globally networked world.[2]For detailed discussions of the photographs originating from NASA’s Apollo space mission (1963—72) as well as how they have been culturally and politically absorbed and put to work, see: … Continue reading It moreover impacted the direction of scientific thought, as noted retrospectively by lead scientists queried by the US National Aeronautics and Space Administration half a century later: “[…] the perspective from space revolutionized Earth science,” reconfiguring understandings of the planet as a “a complex system, its atmosphere, ocean, land, life, and energy melding together into a single organism.”[3]In 2008, to mark NASA’s fiftieth year of operation, the Earth Observatory asked a number of scientists about the insights space flight has offered about Earth. See … Continue reading

One key dimension of this “whole Earth” picture is that obscures national and other geopolitical boundaries — not to mention virtually all signs of human presence — thus, framing the Earth as a natural body. The representation itself, however, is of course the outcome and embodiment of specific geopolitics, namely the “space race” that was roiling between the United States and the Soviet Union at the time. This image of global oneness, in other words, is a direct product of Cold War territorial agendas in competition to extend their reach beyond the Earth’s radius and into the cosmos.

Today, images of the Earth from outer space reveal numerous signs of environmental distress, from the melting of glaciers and polar ice caps to desertification, air pollution, and more frequent and intense tropical storms.[4]Michael Benson, “Gorgeous Glimpses of Calamity,” New York Times (Aug 13, 2013): opinion pages. Such representations are often garnered, along with other kinds of evidence, to support the idea that we have entered an unprecedented stage, the “Anthropocene,” wherein humans are considered a newly geological force, possessing the power to alter the history of the planet itself, including its Earth systems. Contemporary satellite imagery, however, like its historic counterparts, fails to document — or even elides — the complex processes and relations through which environmental conditions come into being, including the socially uneven production and distribution of many eco-crises and violences. The view from above — like broad, planetary frames including the “Anthropocene” — has a tendency to subsume particularities into totalities, with the risk of naturalizing, or depoliticizing, states of affairs along the way.

The artist-researchers involved with World of Matter, for the most part, take up positions aligned with a ground-level perspective, engaging in close-up, embedded investigation. At the same time, they maintain a steadfast eye to links between specific contexts and wider networks—scaling between the micro and the macro, so to speak. While incorporating certain fieldwork techniques associated with the natural and social sciences, their projects diverge from empirical approaches that presume the possibility of disinterested, singular truths, or of observing realities more clearly, and definitively, by way of proximity. For, the close-up view (like the view from afar or above) has, at least since the Age of Reason dawned in the West, often entailed an analytic stance toward the material world that centers the human subject as its knower/master. In his writing on ideas of nature, cultural theorist Raymond Williams recounts the paradigmatic shift that was ushered by eighteenth and nineteenth century Enlightenment thinking, whereby nature came to be seen “not as an inherent and shaping force but as an accumulation and classification of cases.”[5]Raymond Williams, “Nature,” in Keywords: a vocabulary of culture and society (New York: Oxford University Press, 1976), 222-23. The Swedish botanist and zoologist, Carl Linnaeus, in his still-partially-utilized Systemae Naturae (first published in 1735), for example, created a taxonomic system that organized thousands of plants, animals, and minerals into increasingly narrow categories, tagging each with a two-part Latin name. He furthermore dispatched a team of “apostles” to far-flung corners of the world to document its flora and fauna using his binomial nomenclature. Linnaeus’s aim, of course, was to be comprehensive—to develop an all-encompassing framework, or map, of the earthly “cosmos.” We might, in fact, interpret the lunar expeditions from the 1960s and 1970s as an extension, or culmination, of this same scientific-technical imperative.

In contrast to that of the classic surveyor, taxonomist, or documentarian, the “Earth seeing” reflected in World of Matter includes shifting scales and grounds, the muddling of subjects and objects, and sometimes an evocation of the un-see-able and un-know-able as well. All of the works bear some relation to documentary practice, although most involve a built-in criticality toward this very genre or tradition, thus being closer to what we might a call “critical documentary” form of image making. The aim is not to build tidy images, coherent truths, or tales with clear edges, but rather to open onto (often troubling) questions, nuances, and contingencies. Far from being purely relativistic or invoking the politics of non-singular truths in order to cast doubt (something managed effectively by climate change deniers, for instance), World of Matter highlights transnational networks of relation that oftentimes entail the kind of “slow violence” described by Rob Nixon: environmental destruction to humans and nonhumans that is hard to see, or sense, because unfolding over great distances and timespans.[6]He defines “slow violence” as that which “occurs gradually and out of sight, a violence of delayed destruction that is dispersed across time and space, an attritional violence that is typically … Continue reading Also central is an attention to matter itself. While a number of critics have recently railed against the “anti-politics” inherent to various philosophical strands associated with “new materialism” (e.g., speculative realism, object oriented ontology)[7]See, for instance, Svenje Bromberg, “The Anti-Political Aesthetics of Object and Worlds Beyond,” Mute (25 July 2013), (accessed by the author October 9, 2014), in the case World of Matter, there is a driving interest in expanding notions of the political (tied to the polis, or affairs of the city and state) beyond the purely human-focused, without sidelining issues of class and race—to grapple with the social, the geopolitical, the earthly, and questions of justice at the same time.

Emily Eliza Scott is an interdisciplinary scholar, artist, and former park ranger focused on contemporary art and design practices that engage pressing ecological and/or geo-political issues, often with the intent to actively transform real-world conditions. A postdoctoral fellow in the architecture department at the Swiss Federal Institute of Technology (ETH Zürich), she teaches on subjects ranging from the concept of “post-nature” to contemporary architecture “in the expanded field” to emergent geographies climate change. Her writings have appeared in Art Journal, American Art, Third Text, and Cultural Geographies as well as multiple edited volumes. Her first book, Critical Landscapes: Art, Space, Politics, coedited with Kirsten Swenson, will be released by the University of California Press in spring 2015. She is a founding member of two long-term, collaborative projects: World of Matter (2011—), an international art and research platform on global resource ecologies, and the Los Angeles Urban Rangers (2004—), a group that develops guided hikes, campfire talks, field kits, and other interpretive tools to spark creative explorations of everyday habitats in their home megalopolis and beyond.