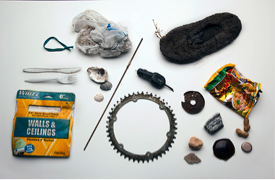 A People’s Archive of Sinking and Melting (State: As of Bonn Climate Change Conference, October 2014) is a collection of items contributed from places that may disappear owing to the combined physical, political, and economic impacts of climate change, including glacial melting, sea level rise, coastal erosion, and desertification. Through common but differentiated collections, contributed materials form an archive of the future anterior; what will have been.

The materials in the archive are intended to mark the asymmetry of present or anticipated loss, standing in as proxies for the contributors’ recognition of the geopolitical production of precarity and slow-onset dispossession. Together, the contributions form one material document among many, a collection of community-gathered evidence, a public record, and a midden.

The archive operates from the principle that any thing is equally valuable as a record of present or projected future disappearance of a place, as chosen by someone there. A contribution doesn’t have to originate from that location. It can be anything that happens to be there, including detritus, flotsam or jetsam. “By July mango-harvesting season is wrapping up in Sénégal and the prices are rising. The city, situated on a massive peninsula, is surrounded by beaches and coasts that are home to many residents, and supports small-scale fishing, wildlife, and tourism. This beach, like most around Dakar, has very shallow stretches of sand and will surely be gone.”

Selections from the New Orleans Collection

Do you live where the object came from?
Some kids do; others have moved since last year. They all have family in the neighborhood.

What have you seen disappear there, environmentally or otherwise?
Houses and businesses.

Why did you contribute to the archive?
So people know what was left after the storm came.

“Contributed artifacts were chosen to represent present-day life in the neighborhood. Location is sinking and would be underwater with a 2 meter rise in sea level according to the Global Sea Level Rise Map on geology.com.” “Found in the rocks around Palmer Station, possibly stolen by sheathbills for their nests in years past. I’m unclear about the exact use of this snap hook, which resembles hardware used on the inflatable boats (Zodiacs) used by scientists and crew when collecting specimens from the islands surrounding Palmer Station.”

With respect for the imaginative effort of the contributors to acknowledge present loss and look towards a troubled future with foresight, contributed items are presented as common but differentiated collections.

According to the 1992 United Nations Framework Convention On Climate Change (UNFCCC), ratifying nations (Parties) have agreed to be guided by all articles and principles of the convention towards the objective of the Convention and its implementation, including Article 3, Principle 1.

1. The Parties should protect the climate system for the benefit of present and future generations of humankind, on the basis of equity and in accordance with their common but differentiated responsibilities and respective capabilities. Accordingly, the developed country Parties should take the lead in combating climate change and the adverse effects thereof.

To this end, objects in the archive are commonly grouped for exhibition, but differentiated as collections organized by nation and individually labeled with UNFCCC Annex Party. Antarctica, from which the archive also houses materials, has no status.

This labeling, an initial method of contextualizing the archives collections and materials, is intended to call attention to the gap between the stated commitments, uneven resources for climate change adaptation and mitigation, and unequal power and vested interests of wealthy nations exercised in climate negotiations; and those nations likely to be subject to permanent loss and damage.

This differentiation is also intended to help viewers interpret the geographic distribution of the materials in the archive, which do not map evenly to risk of disappearance, and to reflect on the resources required to contribute to the Archive, including a connection to English language-speaking arts infrastructure, and to the web and freight networks. To date, the archive has circulated exclusively in Annex I Countries.

Based on the principle of fairness in the context of relative losses and damages associated with climate change impacts, ongoing work of political editing will continue to determine how contributions are framed for research and exhibition contexts.

Does the archive contain a future record of political failure to act against climate change as evidenced by materials from places that will have disappeared? Or does it record a period before the actions to reduce emissions to avoid further climate destabilization and its attendant “economic and non-economic” losses were taken?

Taking from the French futur antérieur, but using the English future perfect, the archive marks current climate politics and nascent climate political resistances, as viewed from the vantage of an audience of in a nonspecific future time and place. For contributors, the future anterior is intended to support a specific perspective — will where I am be habitable in the future? The task and form of the archive also assumes a future with the climactic and social stability and the resources, including place to house it with stable enough conditions to maintain it and a future audience, and a scenario that will support both.

As an archive of the future anterior intended for the present, A People’s Archive of Sinking and Melting is open for submissions, seeks sites for public presentation in Non Annex I countries, and a permanent home. Who should contribute to the archive, given the unequal distribution of impacts, varied timescales, and the personalized dangers of future and present climate and its politics? Anyone who lives in a disappearing place.

Amy Balkin’s projects consider legal borders and systems, environmental justice, and the allocation of common-pool resources. These include atmospheric “clean-air” park Public Smog and This is the Public Domain, an effort to create a permanent international commons. She was a collaborator on Invisible-5, an environmental justice audio tour of California’s I-5 freeway corridor. Recent exhibitions include Rights of Nature-Art and Ecology in the Americas, Anthropocène Monument, and dOCUMENTA (13).