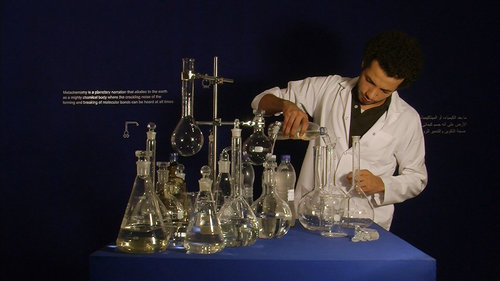 Many of my video essays have elaborated the convergence of the movement of people, resources, and capital in a globalized world, building the video material into complex human geographies. Deep Weather (2013), by exploring the ecologies of oil and water, explicitly forages into the physical and chemical composition of the Earth. It narrates the climate-related transformations of the planet by articulating two remote events — one in the tar sands of Alberta, Canada, and the other in the delta of Bangladesh — through the mechanisms of atmospheric chemistry. The short video essay screened at the Radical Materialism conference draws the connection between the relentless reach for fossil resources with their toxic combustion heavily impacting on the climate, and the protective measures undertaken by indigenous populations on the other side of the world. The temporality it engages is deep time.

Among my videos, often driven by a theoretical voice over, Deep Weather stands out by its infusion of a science-fictional poetic narrative that is whispered into wind like a personification of the atmosphere itself that reaches from Canada to Bangladesh. Implicitly locating itself in the biosphere, Deep Weather draws a thick geography that reaches far into the interior of the Earth and extends a hundred miles outward into the atmosphere. The issue of fossil fuel extraction is no longer a geopolitical but a planetary one. Together with Egyptian Chemistry, it marks the departure from an anthropocentric focus on global migration toward an involvement with the Earth system.

When it comes to global warming, I see the main purpose in video making to be not primarily the presentation of new facts, but the creation of a new place in the viewer’s imaginary that can accommodate entangled conditions which affect the most marginal communities in the Bengal Delta as much as life on the planet as a whole. In the Anthropocene, we need to think in much larger dimensions of time and space. The usual short-term way of operating, on which our economy thrives, is utterly insufficient to grasp our current human condition. What is needed are more inclusive models of imagination that simultaneously pay attention to the very tiny and very large, non-local entities, like insects and global warming; or minute gold deposits and automated world financial markets. We are asked to stretch our imaginary and enter a more speculative mode. Fieldwork plays an interesting role in this shift of thinking.

Egyptian Chemistry, the multimedia installation at the World of Matter exhibition at CUNY’s James Gallery is based on videographic field documents and actual water samples taken from numerous sites along the Nile. It examines water engineering and desert development projects, and inquires more generally into the hydraulic, social, and chemical conditions of soil and water in Egypt. Given Egypt’s extreme hydrography, which is entirely dependent on the Nile, it is easy to make out the political potential of water to materialize national and societal visions. Indeed, Al Khemia, the contemporary Arabic term for chemistry, is the ancient word for the place we call Egypt; it means “the Black Land,” possibly due to the muddy Nile floods which used to seasonally overflow the river banks and fertilize the Nile Valley. The term alludes to the vision of an earth which is, before anything else, a mighty chemical body where the crackling noise of the forming and breaking of molecular bonds can be heard at all times. The three-part video unfolds this idea in relation to modern and contemporary Egypt, asking what kind of bio-political-chemical compositions are currently in formation and what effects they will have on future constellations of biological, chemical, and political life.

The fieldwork included taking water samples along the Nile and in the Delta wetlands. In artistic research, it is often more rewarding to direct only partial attention to the explicit object of analysis and to leave ample space to roam into the wide, to encounter and examine the surprising juxtapositions and coincidences that all fieldwork generates. This methodology favors a state of divided attention, granting the freedom to relax into all directions. In this mode of open research, one is disposed to not merely define the findings, but to create new and unlikely coalescences with semi-conscious affects and ideas, and with other material and immaterial surroundings, which all converge in a shared narrative matrix. Egyptian Chemistry considers minute but consistent material transformations to be a decisive force that drives the reconfiguration of our terrestrial reality, including the political one; these videos view scientific attention, fieldwork and videography as reality-producing practices in this process.

Ursula Biemann is an artist, writer, and video essayist based in Zurich, Switzerland. Her artistic practice is strongly research oriented and involves fieldwork in remote locations where she investigates global warming and the political ecologies of oil and water — most recently for Forest Law in Amazonia. Biemann’s video installations are exhibited at international art biennials and museums worldwide. She is publisher of several books including Stuff-it, The Video Essay in the Digital Age and Geography and the Politics of Mobility.