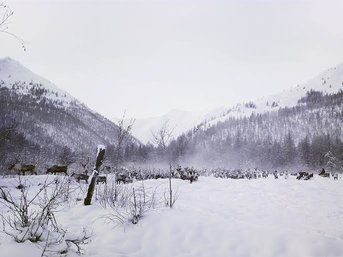 The People’s Climate March (PCM) in New York City last September drew nearly 400,000 people, making it the largest environmental rally ever. On the eve of the march, however, critics began to hurl stones. One critic pointed out that some of the groups endorsing the march have deep connections with the fossil fuel industry (Environmental Defense Fund and the Climate Group, for example). Another wryly observed that nearly a quarter of a million dollars was spent on New York City subway advertisements “inviting Wall Street bankers to join a march to save the planet.” Some of the methods employed by the PCM organizers were clearly at odds with grassroots activism.

In light of these criticisms, part of what happened in New York City could be considered, not so much a march, but more like a dance — as in Henry Matisse’s famous painting, Dance, 1910. I am taking liberty to make some associations — with the compositional arrangement (five dancing figures in a circle) and the color palette (red, green, blue) in the painting — to interpret the culture of top-down environmentalism in America. The subaltern picture of grassroots environmental initiatives in the United States and around the globe is much more varied, however.

The American environmental movement became organized with the founding of the Sierra Club in 1892. Many more environmental NGOs formed throughout the twentieth century, with combined several million members today. Along the way the culture of environmentalism transformed from passionate grassroots activism to corporatism. Today the heads of these NGOs are collectively called ‘Big Green CEOs’; they command substantial salaries, in some cases much more than that of the US President; and there is significant salary discrepancy between employees at the bottom and top of the salary pyramid. These are attributes of corporate culture. In recent years there have also been scandals over some of these organizations’ (Nature Conservancy and the Sierra Club, for example) close associations with oil and gas corporations.

On one hand, Rachel Carson’s seminal 1962 book, Silent Spring, sparked the modern grassroots environmental activism in America, on the other hand, the rise of neoliberalism during the ensuing decades coincided with increasing lobbying efforts by the private sector to advocate for environmental deregulation, which in turn led to further NGO-ization of environmental activism. The Beltway lobbying culture, however, brought three entities in physical proximity: the environmental NGOs, the private sector, and the government. The nexus in turn created a revolving door of employment and mutual benefits — between Big Green groups and corporations (top corporate executives serve on various environmental NGO boards, for example); between Big Green groups and the government (congressional staffers at times seek employment with environmental NGOs, for example); and between corporations and the government (US Secretary of Interior Gale Norton went to work for Shell, after she was forced to resign following an ethics scandal, for example). If we had a seat-at-the-table we would be able to more effectively influence environmental reforms — is what drives the revolving door framework for American environmentalists, besides the lure of money and/or the desire for power. This revolving door and various associations that it leads to is like Matisse’s Dance.

Disillusioned by the ineffectiveness of the Big Green groups to address the climate change crisis, well-known environmental journalist Bill McKibben and fellow environmentalists founded the first climate change NGO, 350.org, mere months before the 2009 United Nations climate summit, COP15, in Copenhagen. Appropriately alarmed by the juggernaut of climate change denial by the Republican Right, McKibben had put his faith in the Democrats — like a trusted dancing partner — to tackle the climate crisis. Soon the national climate movement, with 350.org at the helm, began to look like an extension of the Democratic Party. Like a loyal comrade, it could not voice opposition to the party’s neoliberal policies. While President Obama continued to preside over the largest expansion, in recent decades, of fossil fuels development on land and offshore, leaders of the 350.org remained silent. Likely aware of the mounting heap of criticism (including from this author), last year, McKibben finally said that he and his cohorts “don’t trust” Obama on climate change. Recalling Albert Hirschman’s influential book, Exit, Voice, and Loyalty, it seemed at the time that McKibben had moved from “Loyalty” to “Voice”, while still maintaining a seat-at-the-table for political influence. One critic has also pointed out his connections with influential Wall Street investors. A top-down institution from its founding, 350.org, which was the lead organizer of the People’s Climate March, is also engaged in Matisse’s Dance.

One of the subway advertisements used by the PCM organizers show a partially submerged Statue of Liberty with a clever warning: “THE NEXT ONE WON’T BE BIBLICAL”. The ad brings to mind David Brower’s famous 1966 advertisements in The New York Times that opposed the proposed construction of the Grand Canyon Dam and provocatively asked: “SHOULD WE ALSO FLOOD THE SISTINE CHAPEL SO TOURISTS CAN GET NEARER THE CEILING?” Both ads evoke religious sentiments and use the theme of drowning: the earlier one relates drowning of a Nature icon to a religious icon, while the newer one relates the impending drowning of coastal areas and low-lying islands (due to sea-level rise from anthropogenic climate change) to the drowning of liberty. But while Brower railed against government bureaucrats, the PCM organizers leveled no such criticism against the government’s neoliberal policies, and instead asked a rather banal question: “WHAT PUTS HIPSTERS AND BANKERS IN THE SAME BOAT?” A comparative analysis of the two ad strategies would suggest that visual-PR employed by environmental activists has become less critical over the past half century, while neoliberal policies have become more destructive.

So where do we go from here? To the red, green, blue — in Matisse’s painting. For the purpose of this text, I associate — the deep red in the naked human figures with our ‘appetite’ for materials consumption; the deep green ground on which the figures are dancing with green ‘substitutes’; and the deep blue backdrop with utopian ‘new frontier’.

After industrialization came mass consumerism and a throwaway culture, primarily an invention of the United States, which has been spreading across the globe like a deadly virus. The human appetite for materials consumption, far beyond one’s need, is the root cause of much of the environmental destruction we have been experiencing, including climate change. Instead of addressing the problem of the appetite, the climate movement has been advocating for substitutes — solar, wind, and other green techno-fixes — not unlike dancing on a green ground.

Economist John Kenneth Galbraith had observed the appetite-substitutes dilemma in an essay, “How Much Should a Country Consume?” published in 1958. “But what of the appetite itself?” Galbraith had asked. “Surely this is the ultimate source of the problem. If it continues its geometric course, will it not one day have to be restrained? Yet in the literature of resource problem this is the forbidden question. Over it hangs a nearly total silence.” With Galbraith as the starting point, Indian historian Ramachandra Guha shifted the locus of consumption from a nation-state to an individual, in his acclaimed book, How Much Should A Person Consume?, published in 2006, nearly half a century after Galbraith’s assessment.

The reason American environmentalists, and more recently the climate movement socio-environmentalists, continue to remain silent about appetite and instead divert attention to substitutes — is because addressing it would threaten the very core on which the American society is built upon: capitalism and mass consumption (and ever growing militarism that protects the way of life grounded in mass consumption). But the problem is — if we continue to promote green consumerism, and not reduce the appetite, we will still end up in an unlivable, ravaged earth.

American environmental visual-PR was not only more combative a few decades ago but also included elements of self-reflection. Pogo-the-opossum’s famous words were used in a 1970 Earth Day poster: “WE HAVE MET THE ENEMY AND HE IS US”. No such self-reflection exists in today’s climate change visual-PR. A reinterpretation of Pogo’s words as it relates to appetite seems essential for our time.

The backdrop against which Matisse’s figures are dancing is blue — call it sky or ocean, if you like. The geoengineering “earthmasters” are now proposing to manipulate the sky and the oceans to fix the climate crisis. This is the ‘new frontier’, a human hubris imagined at the grandest scale ever. It is also a dance. The participants include: left-leaning billionaire philanthropists (Bill Gates as the lead investor), right-wing think tanks (The Heritage Foundation and the American Enterprise Institute as cheerleaders), and scientists and technologists with various intentions, some with roots in militarism.

The leaders of the climate movement and the geoengineering initiatives are engaged in the same uncanny environmental dance — to keep the engine of mass consumption humming, fueled by our ravenous appetite.

To live with less is likely the most radical act in radical materialism, and a necessary one, if humans are to ensure survival of the nonhuman biotic life with which we share this earth.

Subhankar Banerjee is an independent artist and environmental humanities scholar, and editor of Arctic Voices: Resistance at the Tipping Point (Seven Stories Press, 2013). A selection of his Arctic photographs are on display during winter 2015 in two exhibitions: Rights of Nature: Art and Ecology in the Americas, at the Nottingham Contemporary in the UK, and Vanishing Ice: Alpine and Polar Landscapes in Art, 1775–2012, at the McMichael Canadian Art Collection in Canada.

Activist, artist, and scholar Subhankar Banerjee is Lannan Chair and a professor of art and ecology at the University of New Mexico. He is author of Arctic National Wildlife Refuge: Seasons of Life and Land and editor of Arctic Voices: Resistance at the Tipping Point. Banerjee works closely with Gwich’in and Iñupiat communities and conservation organizations to defend Alaska’s Arctic from destructive extractivism.