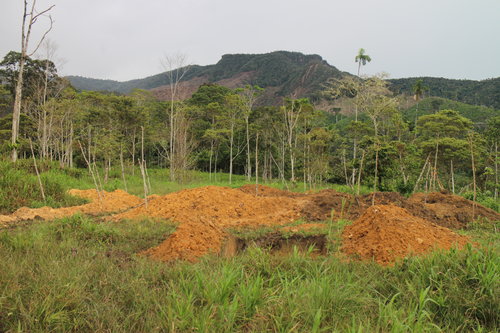 Above: The Cordillera del Condor in western Amazonia, one of the world’s most important biological refuges. Below the green, flat mountaintop, vast tracts of primary cloud forests are being destroyed to clear space for large-scale mining operations. At the foreground of the image, a pit used as a geological testing site lies open in the middle of what used to be peasant farmland. In January 2013, on behalf of the rights of nature, a coalition formed by various indigenous and rights advocacy organizations filed a lawsuit against the Ecuadorian state for violating the constitutional law by allowing large-scale mining exploitation to enter the Cordillera del Condor. The conflict is still ongoing, both in the courts of law and at the forest frontiers of Amazonia.

Like the social contract, the Declaration of the Rights of Man ignores the world and remains silent about it. We no longer know the world because we have conquered it. Who respects victims? The aforementioned Declaration was pronounced in the name of human nature and in favor of the downtrodden and the wretched — those who, excluded, lived outdoors, outside, submerged with all hands in the winds and rain, those for whom the time of life passing was bound to the weather. In the name of those who enjoyed no rights, losers of all imaginable wars who owned nothing.

Monopolized by science and by all the technologies associated with property rights, human reason conquered external nature in a combat that has lasted since prehistory, but that sped up relentlessly with the industrial revolution, more or less at the same time as the revolution whose bicentennial we celebrated, the one technological, the other political. Once again, we must rule in the case of the losers, by drafting the rights of beings who have none.

When the oil company CGC arbitrarily invaded the Sarayaku territory in 2002, the politics in Amazonia were radically different from the period of the military regime in the 1960s and 70s. In the process of re-democratization initiated with the election of president Jaime Roldós in 1979, a powerful coalition of indigenous movements gradually began to build, culminating with the creation of the Confederation of Indigenous Nationalities of Ecuador (CONAIE) in 1986. In 1990 CONAIE mobilized a nationwide uprising, calling for a constitutional reform and the declaration of Ecuador as a “plurinational state.” Two years later, when most Latin American governments were lavishing money on commemorations of the fifth centenary of the “discovery of the Americas,” the Organization of Indigenous Peoples of Pastaza (OPIP), founded in 1978, organized another massive march to Quito, this time emerging from the lowlands of Upper Amazonia. These marches forced the state to recognize the traditional territory of various indigenous nationalities, including Sarayaku, and set the political agenda for the following two decades.

“If not for the mobilizations of the 1990s, perhaps the people in Ecuador would still be saying that there are no indigenous peoples in this country,” asserts Luis Macas, one of the intellectual strategists and founders of CONAIE. “These mobilizations and the massive presence of indigenous peoples were a form of ‘language’ to make ourselves understood. Maybe because we speak another language, they never understood us, so we had to utilize a different language, which is precisely the act of mobilization.”

As the ecological devastation unleashed by the Cold War’s militarized resource-rush engulfed the globe, in parallel with the growing force of indigenous mobilizations that would lead to the 1990s uprising, concerns over the destabilization of the global ecosystems increasingly turned into issues of international politics.

Between the publication of Only One Earth: The Care and Maintenance of a Small Planet (1972) and Our Common Future (1987) — the reports prepared for the first (Stockholm, 1972) and second (Rio de Janeiro, 1992) United Nations conferences on the global environment — debates about environmental degradation, overpopulation, and resource scarcity proliferated in international governmental forums, academic circles, and the media. Environmentalism spawned myriad forms of civil activism and advocacy organizations, whereas the concept of sustainability was eventually added as a qualifier to rejuvenate the development doctrine.

Amazonia was one of the key symbolic and material territories around which those emerging claims and political articulations were constructed and propagated.

Building upon the strong tradition of biological sciences in Ecuador — a territory that has helped to deepen and transform our knowledge about the dynamics and history of nature since the time of Alexander von Humboldt and Charles Darwin — reactions to destruction caused by the oil industry in northern Amazonia led to the formation of a robust and innovative environmental movement, notably represented by the creation of the low-profile yet highly active and politically influential organization Acción Ecológica in the late 1980s.

Ecuador emerged from the 1970s oil boom more urbanized and modernized yet poorer and ecologically devastated, with a huge foreign debt, hyperinflation, and spiraling unemployment. As neoliberal orthodoxy made its way through the 1980s and 90s, the country was subjected to one of the most drastic International Monetary Fund-led shock treatments implemented in the continent. Driven by the indigenous movement, successive political convulsions shook Ecuador for a decade, resulting in the drafting of a new constitution by the Montecristi Assembly in 2007 and 2008.

The product of a historical battle for reformulating the state apparatus whose origins date back to the landmark indigenous uprisings of the ’90s, the Montecristi Constitution declares Ecuador a “plurinational and interethnic state” and introduces a series of innovative legal elements, such as the concept of sumak kawsay — poorly translated as “good living” — which attempts to debunk the hegemony of the concept of development, and the Rights of Nature, which contends that ecosystems — the living forests, mountains, rivers, and seas — are legal subjects.

Under the constitutional law of Ecuador, Nature, or Pachamama, is the holder of a series of inalienable rights: “the right to integral respect for its existence and for the maintenance and regeneration of its life cycles, structure, functions, and evolutionary processes,” on behalf of which — and this is a crucial point — individuals, communities, and nationalities can take action before public institutions and courts of law. Beyond a juridical instrument, chapter 7 of the constitution was conceived as a tactical tool derived from and attached to historical struggles for human rights and collective land rights.

Informed by the philosophy, politics, and ethics of the indigenous movement, the formulation of the Rights of Nature was also the product of debates that surged from within the field of modern environmental sciences, activism, and advocacy. Alberto Acosta, the president of the Montecristi Assembly, speaks about the encounter of apparently dissonant yet ever more allied cosmologies:

When we spoke of a plurinationalism, of respect for Pachamama, of sumak kawsay, of collective rights, we started to recover the basic civilizing elements of these cultures that were slaughtered, colonized, and exploited throughout the conquest, colonial, and republican periods. Therefore it seemed critical that nature be given a preponderant place in the juridical foundation of the state, with its own rights. In the indigenous world, nature never required such rights, simply because it is part of a larger whole. Yet from our logic, incorporating those rights was necessary. Strictly speaking, the Rights of Nature are related to a modern cosmology, because humans are granting rights to all other living beings.

Where James Lovelock’s Gaia meets Pachamama, at the confluence of indigenous knowledge, modern environmental activism, and ecological/climate sciences, the politics of the Rights of Nature were gradually forged in Ecuador. Considering the country’s plurinational mosaic polity, a constituency formed by diverse cosmological perspectives, it was necessary to factor in multiple conceptions of and relationships to nature — that is, to acknowledge by law the coexistence of different natural worlds within the geographical borders of the Ecuadorian state.

“When we approved the Rights of Nature in the constitution, this process implied a reflection on what exactly nature is,” explains ecologist Esperanza Martínez, one of the founders of Acción Ecológica. “When we decided to adopt the term Pachamama, it was foremost an act of acknowledging the wisdom of those who are so closely tied to the Earth. It was also a critical act in relation to classical notions of environment and nature. It was an act of openness, of opening to diversity.”

“From a Western logic you can conceive of a natural contract. For the cosmovisión of the indigenous people, this isn’t necessary because in holistic thinking, by violating the individual rights of a person you violate the rights of nature. Oil exploitation is an example. But in the debates, the environmentalists said it was important that nature be defined as a subject with rights. So we said, let’s meet in the middle. Thus the outcome is a norm with intercultural character, a new concept that can be a paradigm for the conservation of nature. In the case of Ecuador, with the new constitution and the reforms that have been pushed ahead since the nineties, we say that a person or individual is a subject with rights; people or collective identities like First Nations are subjects with rights; and nature too is a subject with rights.”

The above text is excerpted from Forest Law

Paulo Tavares is a Brazilian architect and urbanist based in Quito/London. His work is concerned with the relations between conflict and space as they intersect within the multi-scalar arrangements of cities, territories and ecologies. Grounded on research-based methodologies and commitment to field-work, Tavares’s practice combines design, media-based cartographies and writing as interconnected modalities of reading contemporary spatial conditions. He is currently developing a project on the violence of planning and the politics of ecology in Amazonia at the PhD Programme of the Centre for Research Architecture, Goldsmiths, UK. Tavares teaches architecture at the Universidad Católica de Ecuador – Facultad de Arquitectura, Diseño y Arte, Quito, and previously held teaching posts at the Centre for Research Architecture – Goldsmiths, and at the Visual Lab of the MA in Contemporary Art Theory, also at Goldsmiths, UK. Writings appeared in many publications worldwide and his work has been exhibited in various venues including CCA: Centre for Contemporary Arts – Glasgow, Haus der Kulturen der Welt – Berlin, Portikus – Frankfurt and the Taipei Biennial 2012.