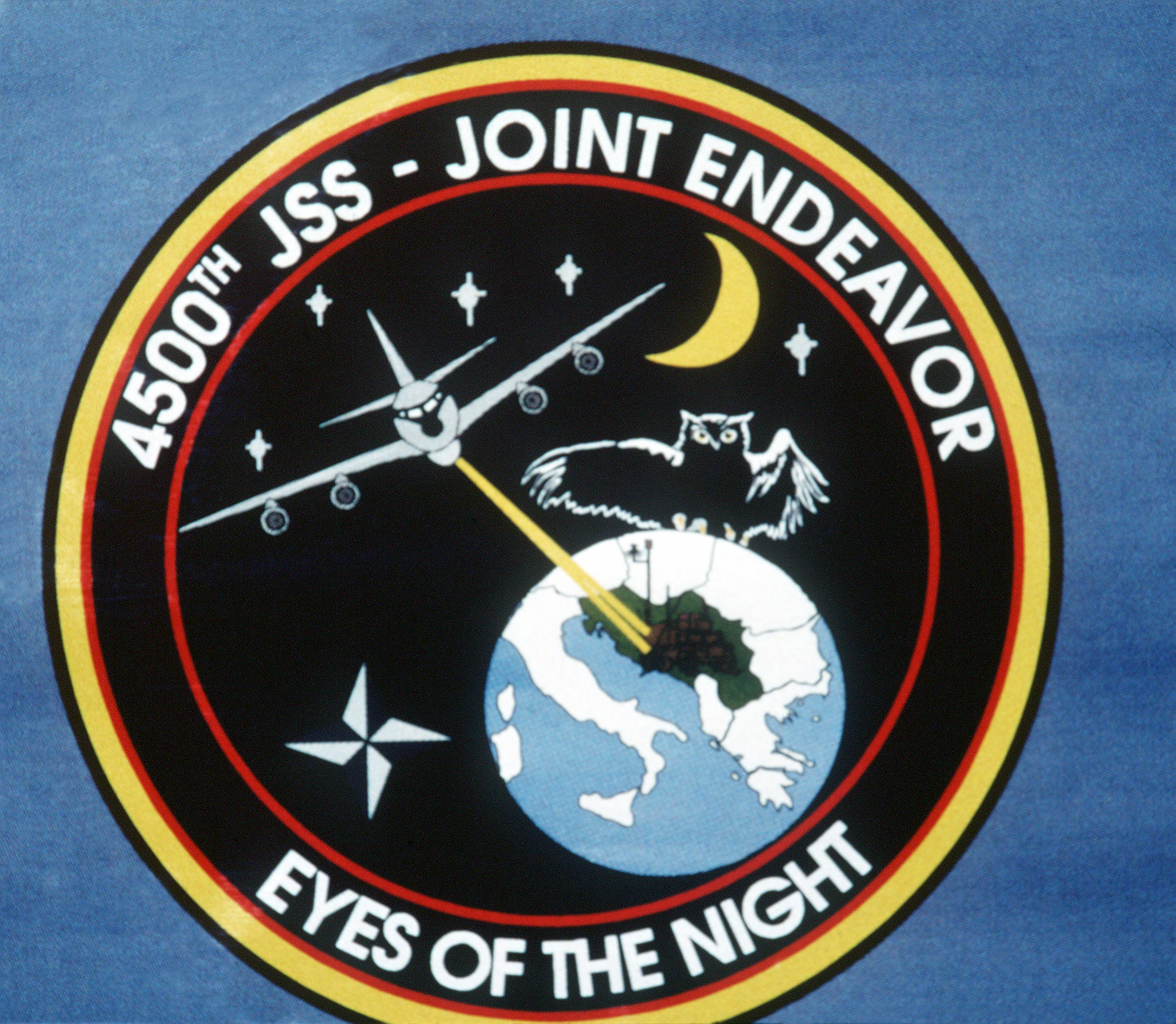 “Weaving exemplifies the underlaying strata of the interplay between arts and media: it is defined by a particular and indissoluble union of art and technology.” –Birgit Schneider in Programmed Images: Systems of Notation in Seventeenth- and Eighteenth-Century Weaving

…are two sides of the same patch. In this short essay, I discuss weaving as a military media technique and reflect on unweaving as one of the many methodologies of media analysis, a media analysis that is accessible to and can be conducted by anyone.

In the following, I will pull some of the patch’s threads. When woven together to form a patch, these threads encapsulate and produce a multiplicity of worlds, relations, and spaces. By being interwoven and sewn on, patches weave people as well as spheres together, but, at the same time, they might also unweave them.

And so, the unweaving starts…

I first encountered the 4500th JSS–Joint Endeavor patch online at The National Archives and Records Administration (NARA). The description of the search result says it is a photograph of a military patch “worn by the members of 4500th Joint STARS (Surveillance Target Attack Radar System) Squadron” deployed at the Rhein Main Air Base in 1995.

However, when I zoomed into the image, I noticed that it was not a photograph of an actual patch. I could see neither the texture of the thread nor the materiality of the fabric. The weave work was missing.

On the internet I found a reproduction of an actual patch from the 4500th JSS–Joint Endeavor. Its value as a collectible: $34.99. This patch was circular, not entirely ﬂat (1/16 inches in diameter), and had a merrowed edge. Two photographs of the collectible showed that it had a front side and a back side; it combined textile(s) and colorful threads. The threads seemed to burst out from the textile on the front; on the back, the other side of the weave work was visible.

At first glance, the 4500th JSS–Joint Endeavor patch seems to simplify the worlds it encapsulates and produces. However, taking a closer look at the various elements that are interwoven in the patch, we see a rather complex world of texts, threads, and practices to be accessed and discovered.

In both the design and the patch, spaces are shown, produced, but also defined. How the spaces are understood is highly dependent upon the practices that these objects refer to. They are dynamic and constantly shifting. They jump out at you when you look at the differences between those two, between the patch and its design.

In the latter you might recognize ﬁve smaller stars, a moon, and what appears to be a bigger star. I wondered what the bigger star stands for and what kind of spatial qualities it evokes. It contrasts with the other stars: it is bigger, has sharper edges, and slightly resembles a ninja star.

Is it Polaris–the North Star? The second brightest star? The star that comes in handy if you want to navigate through space? Or is it a satellite? What shapes do satellites come in?

I pull the thread of the satellite. For one thing, the 4500th JSS were a specialized reconnaissance group. They used satellites to get a clear view of the targets they were tracking. What’s more, Trevor Paglen, in his remarkable attempt towards a media archeology of military patches, describes a similar figure in the Mission Operation: You Can Run patch as a: “single white star signifying a reconnaissance satellite” (127).

These multiple understandings of the star introduce different spaces with their varying spatial qualities. If we understand the brighter star as Polaris, then the space becomes one that needs to be navigated. If we understand the star as a satellite, then it is not only a space through which one has to navigate, but one that is also being surveilled and mapped.

Where the design of the patch allows for speculation–it can be some random star, it can be a particular star, or it can be a satellite–the ﬁnal sewn patch narrows these interpretations down to a single one. Thanks to the color of the threads we recognize the compass rose from the NATO ﬂag. Understanding the star as a compass rose does not necessary displace the previous interpretations–rather, it sharpens them.

The NATO compass rose tells you that the patch is about navigating through space and being collectively navigated towards an ideal–not a speciﬁc geographic destination but towards “the path of peace.” Hence, space by means of the star-satellite-compass rose cannot be reduced to a single geographic space. It is a space that is navigated, surveilled, mapped–and one which is constantly delineated on the basis of states of war or peace, democracy, and political orders.

When it is sewn to the soldier’s uniform, the patch not only shows symbolic spaces but also produces spaces in social terms. It creates spaces of intimacy between the soldiers and marks their bodies as belonging to a specific social and military structure. Sewn to the uniform, it acquires the power to establish and solidify military identities.

Furthermore, the patch tells us about worlds of shared secrecy; it constructs but also excludes others from them. The Joint Surveillance Target Attack Radar System is not a secret program; nevertheless, what an encounter with a soldier wearing this patch would have told us is that some people understand the employed systems of surveillance much better than other people. And that few of these knowledgeable people were wearing this patch during Operation Joint Endeavor at the beginning of 1995.

Different types of military patches are sewn onto a soldier’s uniform: unit patches, combat patches, and the so-called “morale patches,” to name a few. The latter belong simultaneously to the public, semi-private, and private sphere. They are often “designed to be a funny inside joke” by someone from within the unit. With regards to the blurring of the distinction between these spheres, aside from the pictorial representation, the text takes on a central role. Even though the 4500th JSS—Joint Endeavor patch is probably a combat rather than a morale patch, it also blurs the distinction between these spheres.

On the 4500th JSS—Joint Endeavor patch we can see the name of the unit and the operation on the upper half, while the lower half bears the text: “Eyes of the Night.” Colonel Gould said in an interview back in 2007: “We call ourselves ‘The eyes of the night.'” This is a description of the unit coming from the inside rather than the outside. Whether it is funny or serious can only be judged by the unit’s members. That’s the thing with inside knowledge and inside jokes.

The motto or self-description “Eyes of the Night” and the pictorial representation of the owl also have another implication for the understanding of space. They transform the earth’s surface from a merely surveilled ground to a hunting territory. It is a space that does not necessarily have to be understood as secure, but should be understood as marked by conﬂict and danger.

And so, the unweaving continues…

Rebecca Boguska received her BA in Theater, Film, and Media Studies from the University of Vienna and her MA in Theory and History of Film and Gender Studies from the University of Zurich. She is particularly interested in gestures, the relationship between media and recognition, and in image economies in the context of military conflicts. In 2017 she joined the Configurations of Film research program at the Goethe University Frankfurt as a PhD candidate. The focus of her PhD project is on military image production from the Guantánamo Bay Detention Camp and on the role of image banks in the distribution of torture images from the Abu Ghraib prison.