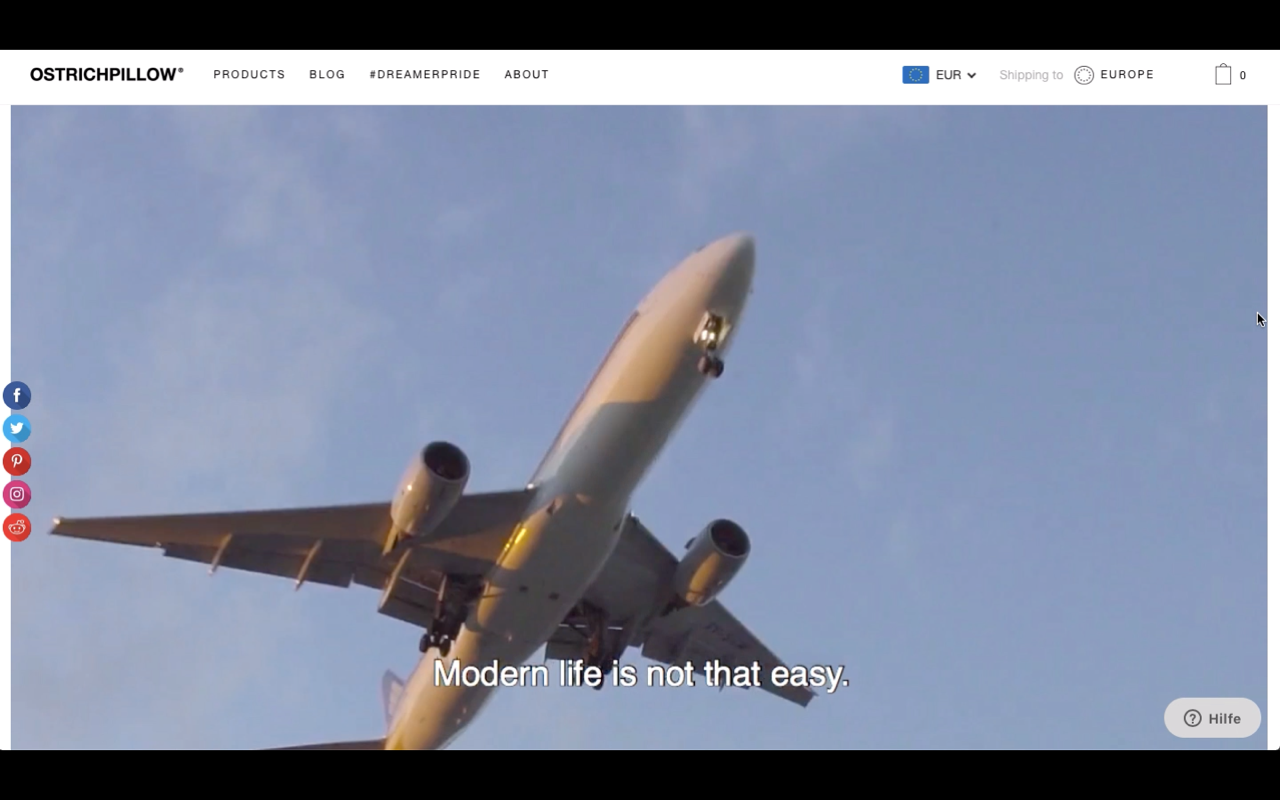 The title of this piece refers to dreaming, an experience one can have awake and asleep alike. Dreaming takes you somewhere else, on a somewhat miraculous journey–pretty much like floating in mid-air.

Boarding an airplane is still an exceptional situation for me. I tend to be nervous. Once I have found my seat (hopefully aisle, never window), I immediately check the in-flight entertainment system. I would prefer sleep. But I just can’t.

Being in a state in which one is deprived of any conscious perception–if that can even be considered a fact anymore. I wonder about the fact that sleep and especially sleep deprivation, insomnia, and other sleep disorders have attracted much scientific and popular attention. Sleep, it seems, is an indicator. But for what?

On an airplane, there is one major ambience hurdle for easy film consumption or the comfortable ten-hour nap: the AC. The older one gets, the more the ubiquitous warnings seem like they might ring true. What if it is too cold and I get sick? What if someone is coughing or has a deadly disease that the ventilating system will inevitably spread to all passengers, turning the airplane into a flying coffin? Today, airplanes are still air conditioned by what is known as bleed air. This mechanism utilizes exhaust air from the plane’s turbines and was patented in 1949. The pressurized air cabin, which is still in use today, dates from 1944. And again, like in dreams, unwarranted guests creep in, irritating at least, threatening at worst.

But like with any impediment, there are various solutions here, too.

The first one is the obvious one: tranquilizers, sleeping pills, or other psycho-altering substances. Travelers may choose between Melatonin (which is the hormone that induces sleep), Meclizine, Dimenhydrinate, and Zolpidem, better known as Ambien, arguably the best-known sleeping aid. Its mode of operation is the same as with “benzos,” benzodiazepines, a class of psychotropic substances (you may have heard of Lorazepam, Diazepam, et al.). Benzodiazepines relax and sedate by enhancing the actions of GABA, a neurotransmitter that inhibits the transmission of impulses from one brain cell to another. One could say that GABA shuts down a neurochemical conversation happening inside your brain. It’s like a suddenly intruding parent or authority entering a room.

Now, if you fear chemistry, side effects, or just find sleeping under the influence a little scary, there are other alternatives at your disposal. One of the most peculiar seems to be the so-called Ostrich Pillow. 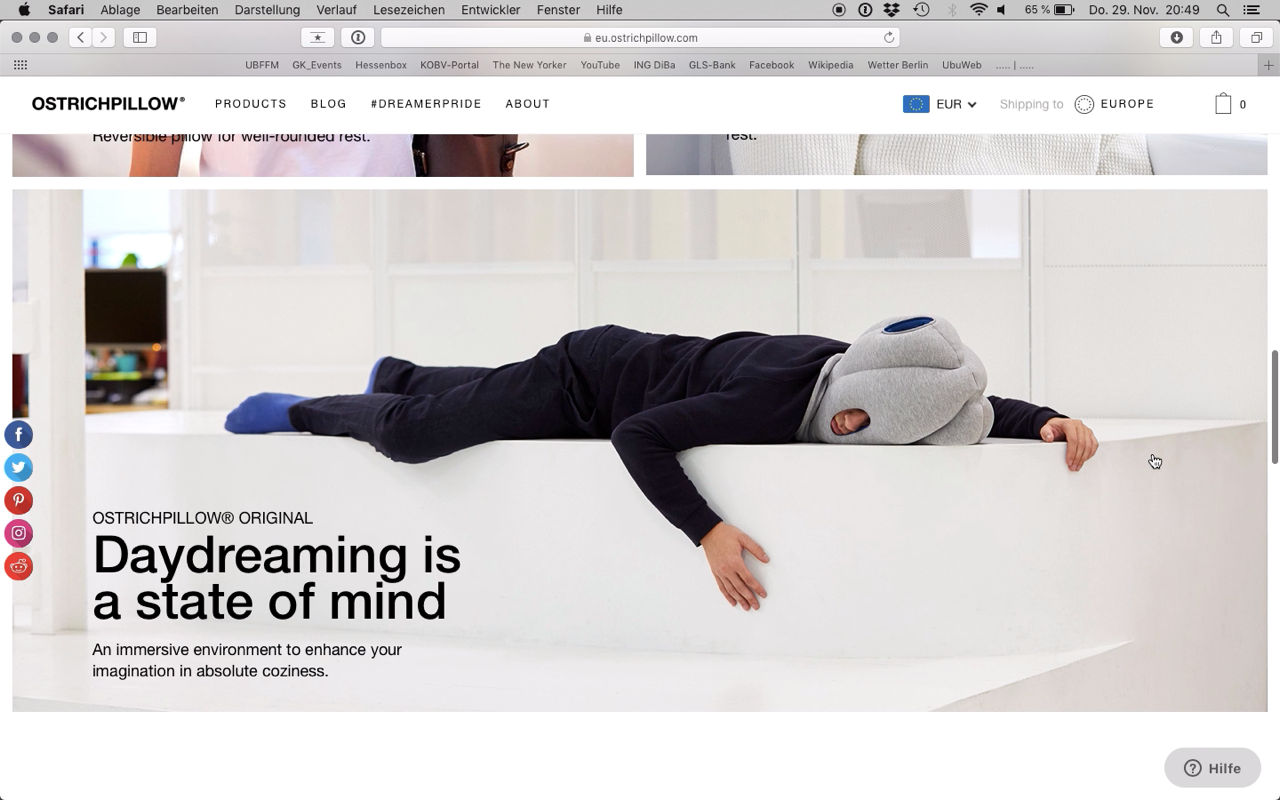 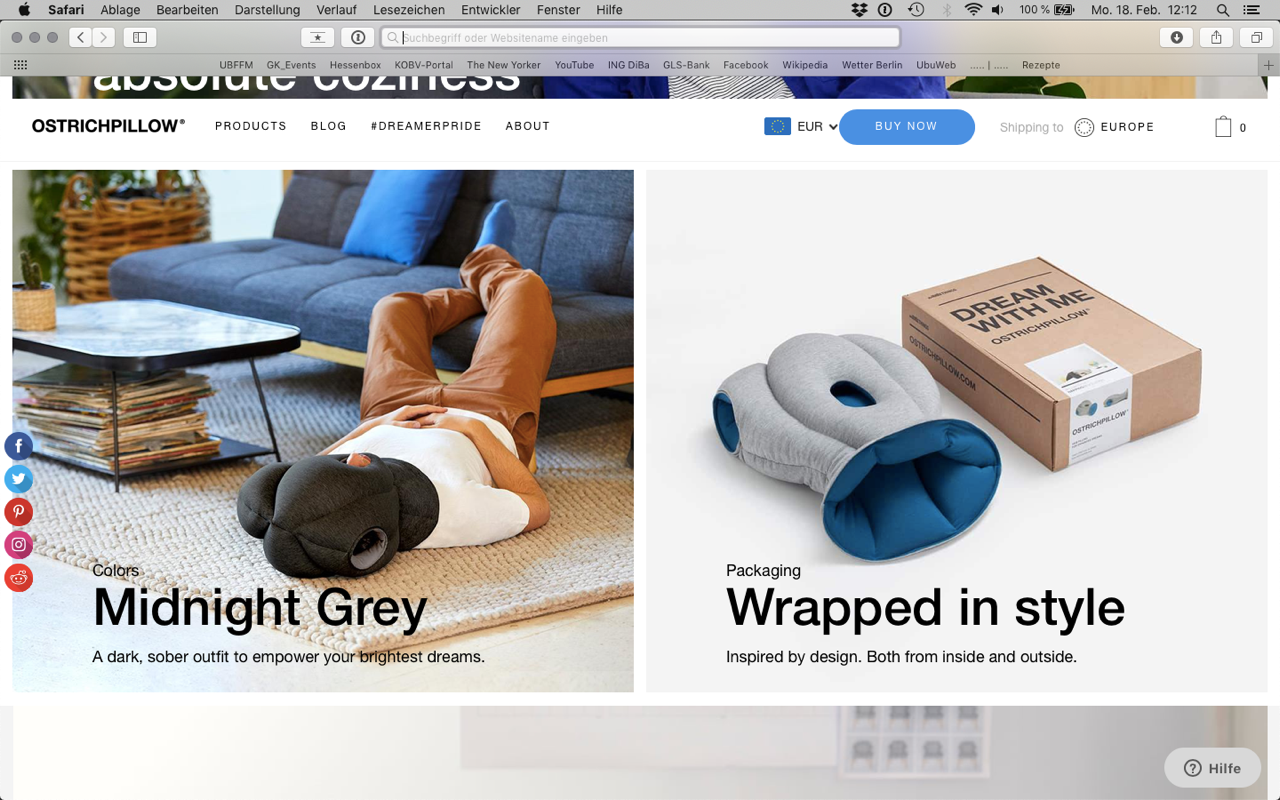 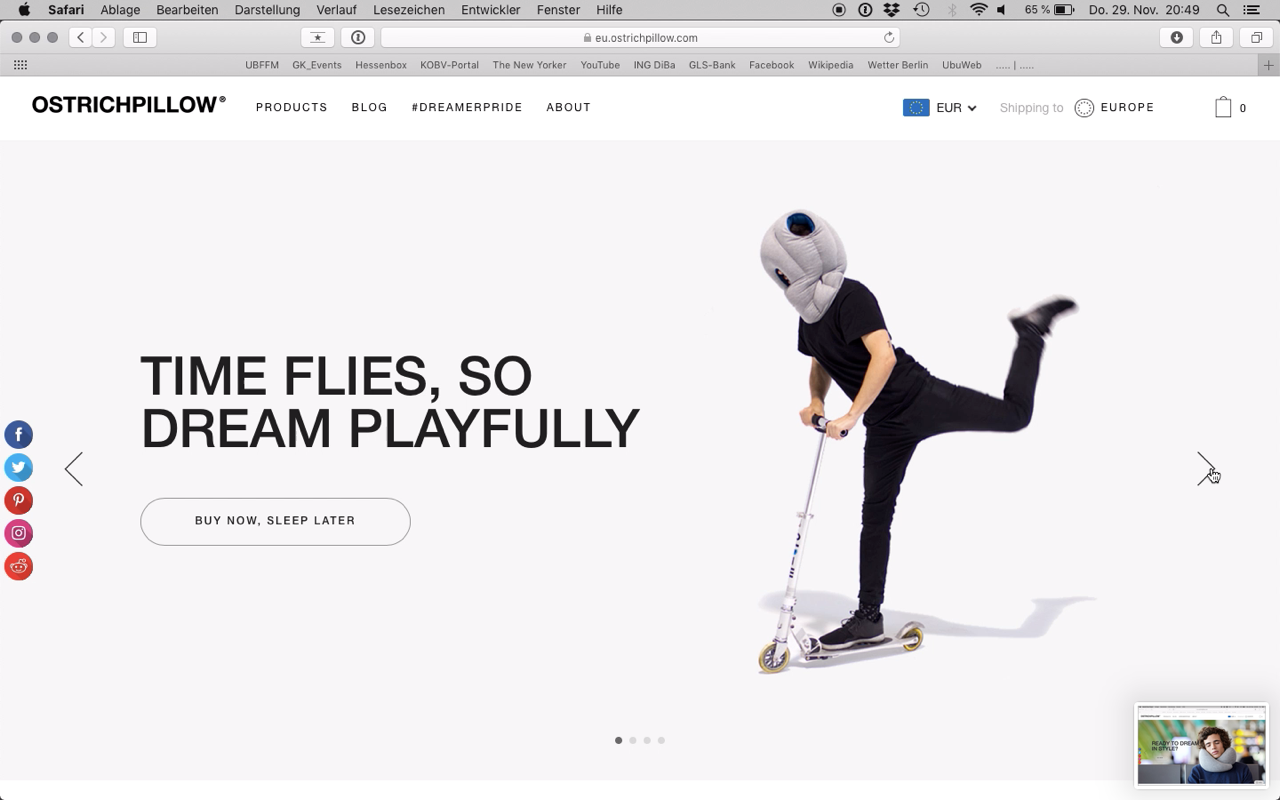 As you see in the above images, the website’s design emulates a spiffy magazine style or a blog; obviously a lot of effort has been invested to make the website and the product look sleek and appeal to a certain group of customers.

The accessory is named after the flightless bird family known to bury their heads in the sand when the going gets rough. In the 90s, some may remember, self-proclaimed trend researchers described a similar sort of behavior as “cocooning,” referring, broadly speaking, to withdrawing from social life into the private realm. It was coined as a marketing term in 1981 by Faith Popcorn, and in a way that name tells the whole story. According to Wikipedia, she is a futurist, author, and CEO of a marketing company. 1981: the year Ronald Reagan was sworn in as the fortieth president of the United States, definitely crushing the New Deal coalition, propelling Reaganomics, which, simplified, means hawkish foreign policy and cutting taxes and government spending, and which has led to the mind-boggling income inequality of today. (This is true not only in the US, but pretty much all across the globe. What Adorno said in the 1958 in his talk “Kultur und Culture” rings true in hindsight, at the eve of capitalism: the US is a magnifying glass for conditions around the globe.)

The conservative realignment of the Reagan era correlates with the birth of cocooning, then, which helped to design hygge goodies for a cozy shelter–which may just be a displacement of the fortress that homes and countries have (been) turned into. The luxurious home cinema and the CCTV guarded fence connected to a private and naturally armed security firm relate to one another like the on/off switch of a technological device. There is such a thing as “tele-cocooning.”

Modern life is not easy. Let’s go to sleep. But not home, just anywhere, that’s the pillow’s promise. It offers comfort, I believe in all the word’s meanings. Being able to sleep anywhere at any time. On the train, in an Uber, or in an airplane, being moved, totally mobile, yet immobile, unconscious, having defeated the last impediment to hyperproductivity, dreaming about a minimum wage of fifteen dollars an hour. Power naps are no longer confined to the realm of privacy—what does that even mean? Now one plugs out in the various non-places that signify our contemporary environment–cars, trains, airplanes, university libraries.

But the pillow also creates comfort in giving the wearer a sense of sedating themselves from the increasing inequality produced by today’s oligarchization of the global order–an order one is finely implicated in, of course; how else would one be able to fly? Not being at the top of the food chain might feel bearable while you dream.

Any place is now a place to unwind amidst society’s unwinding. And for these processes, the US serves once again as a privileged object of study.

But beware. It can all be forgotten, even enjoyed, if you are in Business or First Class. There you can lie down and sometimes even take a shower. 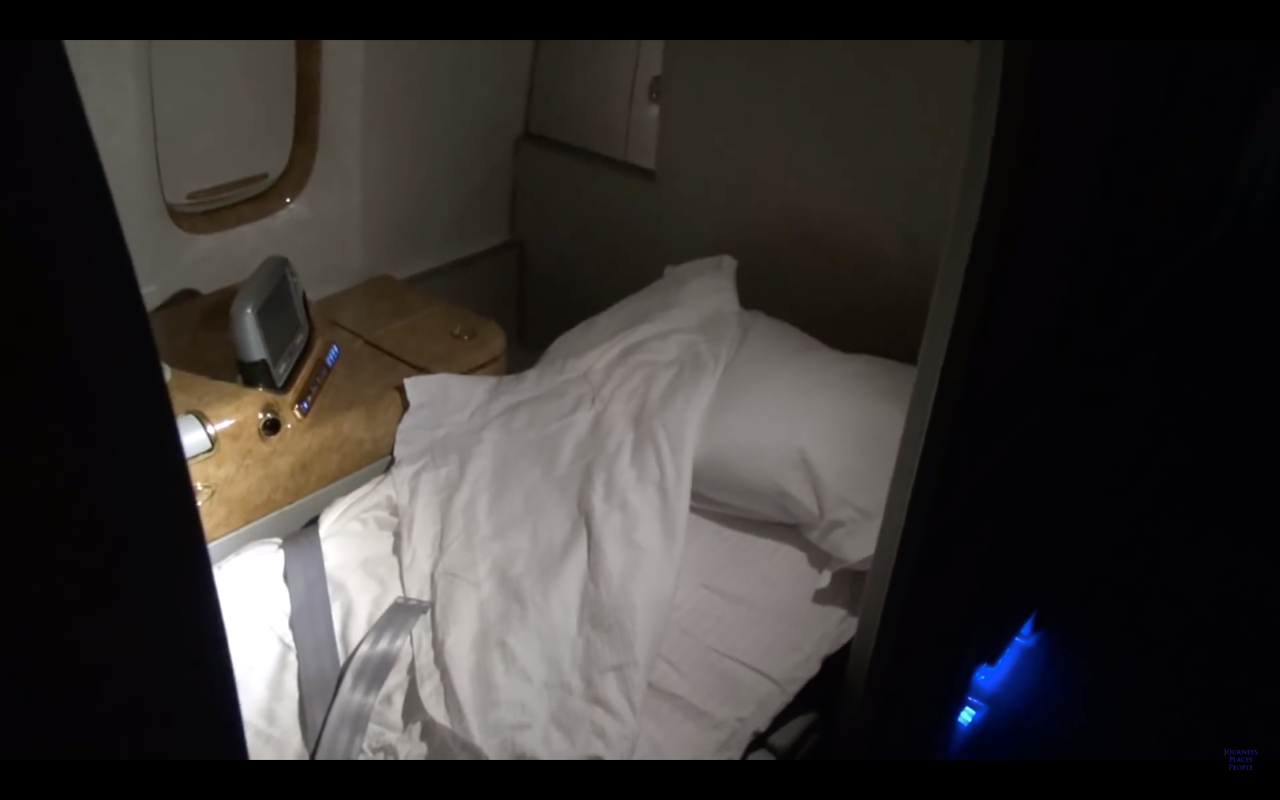 Social stratification of the hypermobile global floating class shows in an airplane, more specifically, in how easy and comfortably you can sleep. Relaxed and unwound, you might even want to watch a movie, just like that, because you feel like it. And not because you just can’t sleep. 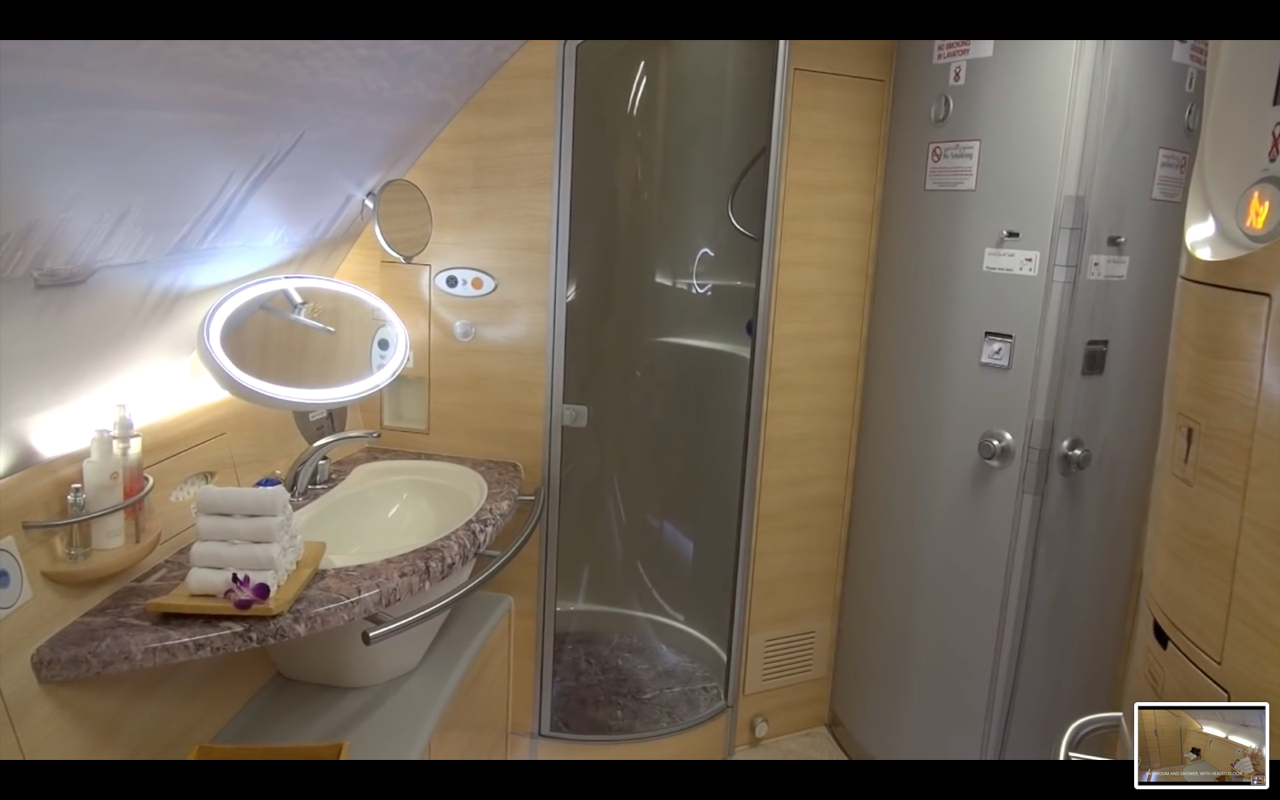 Jan Mollenhauer is a PhD candidate in the Graduiertenkolleg Configurations of Film at the Goethe University Frankfurt. During the summer of 2017, he was Research Fellow at the research group Cultural History and Theory of Aesthetics at the Humboldt University of Berlin. He has presented at numerous national and international conferences. In 2017, he received scholarships from the Humboldt Graduate School and the Getty Research Institute.