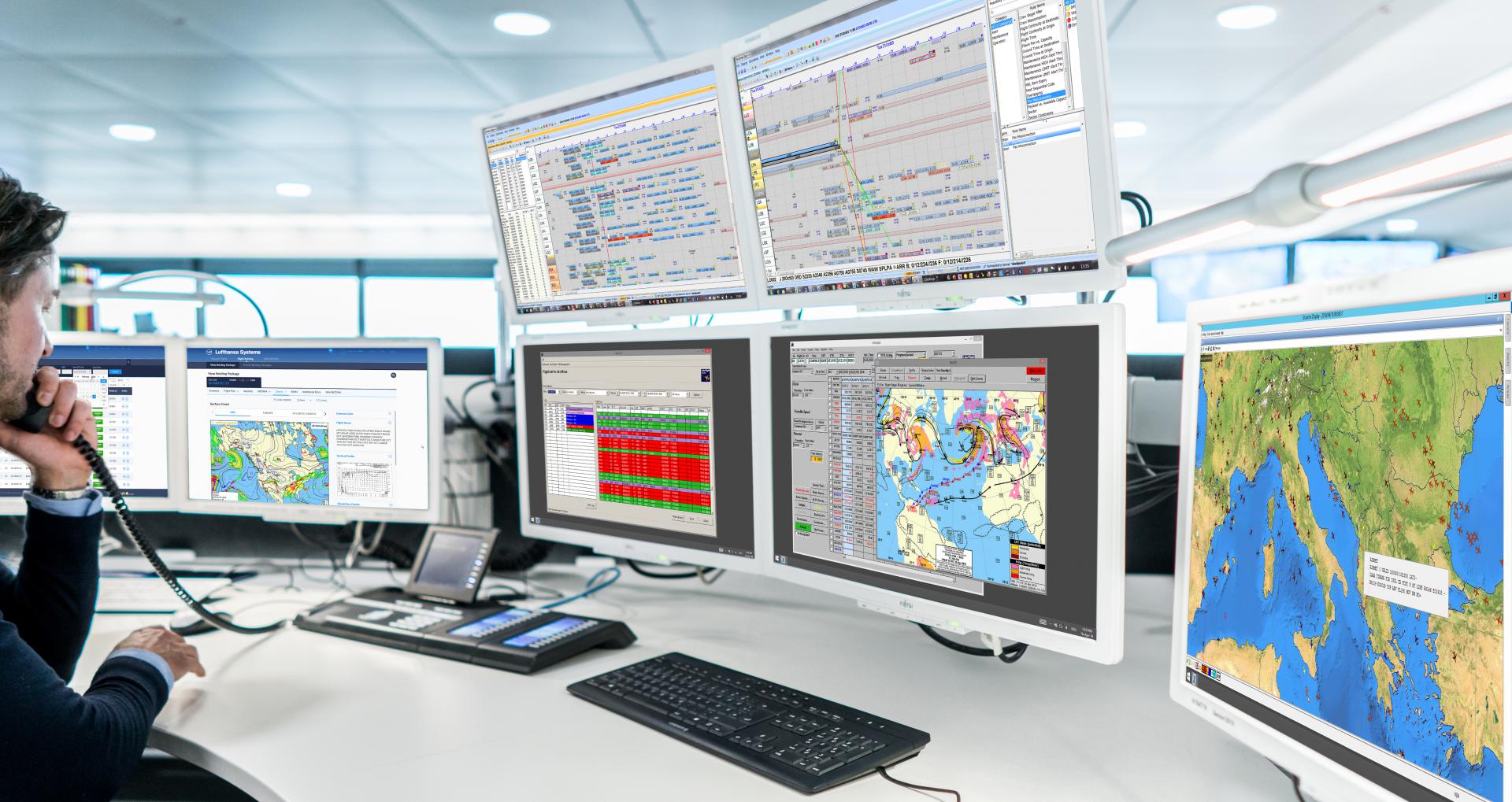 The flight status “delayed” marks the fragility of the perpetual, intricately planned flow of traffic at the airport. It also works as a regulator, slowing down the complex, chaotic dynamics of ongoing processes and simultaneously countering our rushed states of mind. It could be argued that because delay is so ubiquitous, it isn’t that relevant. In fact, though, delay is only the most visible element of a large number of intermediate actions. These intermediate actions coordinate all the sensitive elements within international aviation systems, like the communicative interplay between tower, traffic controllers, and pilots.

“Delayed” is, furthermore, an index of economic balance. Custom software illustrates this balance by gathering all the features, all the required functionalities, necessary for optimal stability of flight scheduling, check-in, safety, baggage tracking, food processing, boarding management, and more. “Delayed” reveals dispatching and flight planning to be an intricate operation with a lot of elements that must occur simultaneously. The organizational structure of this software is visually ordered in stripes. Green and red lines denote smoothness or lags in the workflow, respectively. Looking at the air-control homepage “ACS System Enterprise,” we see that time is already equated with money, as the text regards the stripes as valuable resources and refers to them in the language of losses and gains. (See Figure 1.) 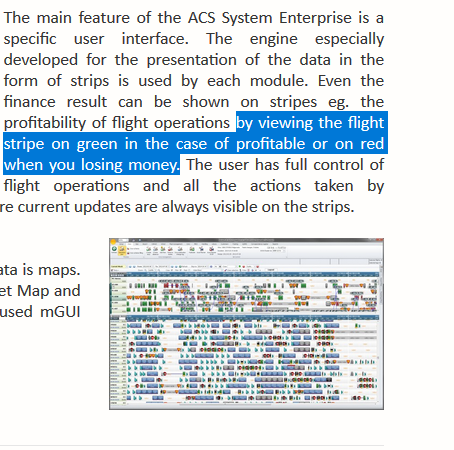 These calculations are essential for aviation staffing software, which operates around the relationship between two primary factors of availability: an efficient number of available crew members and permissible traffic density. The software is designed to operate in compliance with legal requirements and industry-wide agreements to support cost reduction as effectively as possible. The spaces we see in between the stripes indicate accepted parameters; green marks a “healthy” state and fluctuation within the system. Time frames indicate efficiency.

But since time is captured and spaced into individual segments in these fields, we could also call the fields containers. For they contain not only the crew circulations and the different airlines, but also the passengers: all the parties involved in flight management. Or in starker terms: the total surveillance for safety reasons makes it necessary to quarantine the passengers within well-organized pits.

This sensitizes our cognition of time to the point where we usually tend move quickly into the airplane even though our seat numbers have already been fixed. Our negative emotional reactions to a delay, then, may be not so much the result of lost time or, in more abstract terms, stolen time, but of the fact that the moment we enter the plane, our time becomes disposable. Writing in Time, Media, and Modernity, Emily Keightly is right to stress the way that modernity blurs the boundaries of time: “the old categories of natural time, social time and mediated time are becoming increasingly unsustainable” (14).

The airport´s timescape of modernity emerges from the synthesis of these differentiated temporal gradations. It restructures our individual experiences with regard to fragmenting the proposed path. Tyler Durden in David Fincher’s Fight Club (1999) speaks of the way we understand everything as single servings, even when we travel, creating a sense of an intuitive wholeness composed of portioned, disassembled parts. Every little step on the route is segmented and organized from above. For certain moments we hand over responsibility; these specific segments of our lives leave digital and impersonal footprints within automated processes. So the time remains contained, at least up to the point when several audiovisual indications serve as tangible tracers of our self-determination and change us again when the aircraft comes to a halt. The moment the engine noise ceases we start regaining back our ordinary mindset and rational self-perception. As the seatbelt sign switches off, we prepare for the hectic world outside. Yet it is the asymmetric sound of seatbelts unclicking layered with several psychoacoustic indicators—like everyone in the group rushing, intuitive unlocking gestures, and conditioned experience—that “obliges” us to escape this sphere. The clicking noise works as more than a simple sound of release; its liberation from the self-imposed system of fully designed economic regulations, regulations that are highly susceptible of being endangered by what seem to be small occurrences, as a short example shall illustrate.

Let’s picture how this works by imagining the unlikely, but not completely impossible, event of a simple object like a pencil falling behind the cockpit’s dashboard. Of course, one can imagine other objects, like cutlery, falling behind the dashboard. Or, for instance, the cockpit’s bed-locking mechanism could be blocked or the heating system could fail, etc. From a cinematographic point of view, the pencil strikes us as especially specific, since this conceptual tool, which once floated so peacefully in Kubrick´s Space Odyssey (1968), is now bound in two ways to earthly gravity: the physical gravity and the economic one. The pencil could damage the air vents or other sensitive electronic devices like the radar system, but in any case it would paint the green container red. (See Figure 2.)

Now the pilot would most likely call someone from the technical team. At the same time, on a screen in the crew rostering and steering department—the department that holds both flight planning and aircraft security—a legality checker, an algorithm embedded in the aviation software, would indicate a crew-recovery problem leading to congestion. This algorithm works continuously in the background as a corrector for the sake of economic stability to attain a sort of virtual equilibrium, reallocating not only the technicians in pursuit of an effective labor process, but also, eventually, our individual experience of duration.

Thus, the temporal intervals we experience as passengers are created by an AI application that is designed to maximize profits for the company. This software solution marks a fusion between analog and digital regulations and shows that there is a maximum interface between natural and artificial evolutionary processes not unlike the impact of electrification. So, what are the spaces in between the containers besides produced time? Aren’t the containers also our bodies?

These bodies and their meaning are confined within the working space of transnational labor as well as in the production of social reality. We can read the spaces among the bodies both as what connects them (by constituting community) and as what separates them (by constituting transnational commodity) in an extension of what J. Nicholas Entrikin calls the “betweenness of place.” And this is where the denotative, connotative, and symbolic meaning of the aviation software comes full circle with critical social semiotics. The airport may be viewed in the context of the topos of overcoming the border or limit; its computer-guided tools are still a kind of marker of boundaries separating space into outside and inside and making the boundary nonpermeable. Lefebvre’s theory of the production of spaces is reflected in this observation of constructed spheres. We might see the airport as the ultimate result and mediator of what Lefebvre calls “conceptualized space”: “the space of scientists, planners, urbanists, technocratic subdividers and social engineers….the institutional architecture of space” (291). The pencil is a major instrumental tool of these spaces and there is a certain pleasure in picturing it disappearing behind all these other tools of technical precision in the cockpit’s manual to interrupt the very power of acceleration that it created.

Note: I would like to express my gratitude to my uncle, Boris Novosel, who works in the Crew Rostering and Steering Department at FRAport, for explaining the complex field of flight planning and dispatching to me.

Marin Reljic is a PhD candidate in the Graduiertenkolleg Configurations of Film. He received his MA at the Goethe University, Frankfurt in musicology and art history. He also attended piano, composition, and musical analysis courses at Dr. Hoch’s conservatory in Frankfurt. In addition to his academic appointments, he is a filmmaker and film composer.