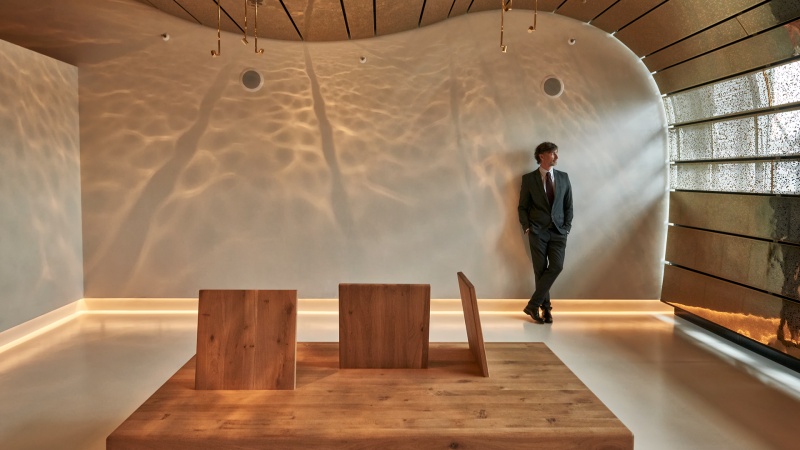 To what gods is one supposed to pray in this place, conveniently located at FRAport’s Terminal 1, Gate Z, where something so obviously glitzy as an undulating, wavy ceiling with a polished-gold finish can pass for “weltanschaulich neutral”?

When one looks at the pictures of the Room of Silence’s shimmering ceiling and wall panels, one’s mind wanders to the field of interior design. The extensive use of gold here signals a general moment of sacrality which is, however, not articulated in favor of any denomination in particular. Even more striking is the way that light is used. It seems as if the idea of self-reflection, i.e., engaging in quiet introspection, was translated directly into the room’s overall design. Made from a special kind of stainless steel alloy called EXYD-M, the irregular surface of the walls and ceiling reflect the light hitting it in such a way that the resulting reflections look like waves or ripples on water. Furthermore, the room will react to atmospheric conditions on the outside. On dark and rainy days, the light will compensate by shifting into a deeper, warmer shade of gold, whereas on sunny days the reflections are overall brighter and less distinct. Thus, the Room of Silence establishes a connection between inside and outside that also makes the entire impression seem less static. The name of the original title of the design, which Katharina Woll, then a student in the interior design program at Mainz, handed in for the competition was “Lichtwandel” (changing of the lights), suggesting an aspect of mobility in the process of winding down.

In a press release issued by FRAport one can find a quote by Harry Gaterer of the Zukunftsinstitut (the Future Institute) of Frankfurt/Vienna that introduces the Room of Silence as a particular antidote. “In the 21st century,” Gaterer writes, “we are constantly bombarded by masses of information and bathed in the glow of screens with hardly a break. This so-called information society is now reacting to this overkill with a countertrend: mindfulness. It’s therefore safe to say that in the future, people will actively seek moments in which to reflect and reconnect with themselves. This type of everyday spirituality is poised to become an essential survival technique. The principle of ‘strength in serenity’ has never before been so relevant.”

I want to point out the implicit use of the metaphor of the air-raid shelter in Harry Gaterer’s description of the Room of Silence. Information–in his example transmitted via screens–takes the form of a psychic bombardment resulting in passengers having “hardly a break.” To avoid this barrage, people have to come up with an appropriate counter-strategy that involves the Room of Silence as a panic room of the information society.

Strangely then, the Room of Silence is disconnected from the reasoning that sustains it, i.e., the maximum exploitation of individual attention spans via the use of a close-meshed network of screens and displays. This disconnect is worth looking into, I think, as it can tell us something about the state of criticality today. 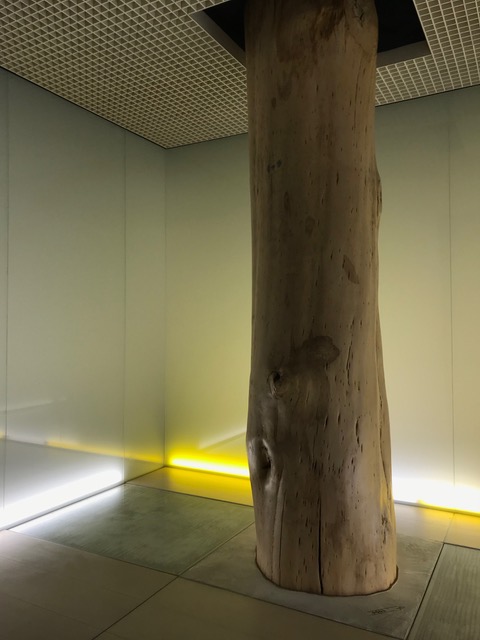 The Meditation Room at Düsseldorf airport is a slightly Blade-Runneresque, roughly elliptical interior, about one hundred square meters in size and with a low ceiling. Both the floor and the interior walls are clad in basalt tiles. Golden light trickles in from lamps that are placed inside of air vent-like lamellas in the right-hand wall. Wooden benches, large enough for one person, are pointed toward an altar of sorts: an empty metal bowl (copper? brass?) that rests upon a massive basalt pedestal, partly submerged in water.

In Munich, a single, branchless tree trunk, whose bark has been stripped away and whose surface has been treated so it feels smooth to the touch, grows out of an exposed concrete floor and disappears into the ceiling again. The walls are made of opaque plexiglass and are illuminated by white and yellow neon lights. Two alcoves allow visitors of the room to sit down and let their minds wander.
Both the pedestal and the tree trunk are underdetermined, allowing visitors to project their own thoughts and emotions into them. They are spaces of observation, of looking inside oneself, a very strange kind of cinema, where the screen is made of water (or nothing), always empty and always receptive.

In 2002, Robort Somol and Sarah Whiting published an article in perspecta in which they outline a theory of post-critical or projective architecture. Different from the “formalist-critical project” with its focus on “definition, delineation and distinction (or medium specificity)” (76), projective architecture is all “about mood or the inhabitation of alternative realities (what if?, the virtual)” (77).

The meditation rooms in Düsseldorf and Munich appear alike in their ambition to create this sort of alternate reality, of a projective architecture, which, instead of reflecting its immediate surroundings, provides momentary disconnection from the bustle of the airport. Could it be said that the silence within these spaces is also a silence of criticality?

At the Munich International Airport one can find so-called Nap-Cabs, pod-like structures that one can rent at an hourly rate of 15€ and where one, with the help of an A/C unit and individual interior mood lighting, is invited to wind down.

The Nap-Cabs are cuboid structures, about half the size of a standard shipping container, covered with white, glossy plastic panels that signal a certain space-age futurism. A touchscreen connected to a slot for credit cards allows for monetary exchange. The interior is lit in an oceanic, LED blue, suggesting undefined psychotropic properties and an atmosphere of calm and recluse but, perhaps paradoxically, also of high-powered work sessions, fueled by multiple USB outlets.

Today, some corporations give their employees the opportunity to rest during work hours within designated spaces. These facilities range from a simple row of cots to elaborate, honeycomb-like cells. In the Basel office of consulting giant PWC International, workers can withdraw into an artificial garden of sorts with moss-covered walls and strange, glowing trees. A high-tech, post-critical grove, where talking is frowned upon and all potential conflicts melt away into ambiance.

Airports, like corporations, are in constant competition with each other. None can afford not to adopt an emerging trend in service. In addition to the Nap-Cabs in Munich, one can find similar installations at airports in Abu Dhabi, Helsinki, Dubai, Moscow, etc. The idea seems to be that the sleep you get inside one of those pods is of a more refined quality, a kind of premium-sleep, so that instead of eight hours, only twenty minutes of power napping, wedged in between two connecting flights, will replenish your mental energy.

“What is important to institutional power, since the late nineteenth century” writes Jonathan Crary, “is simply that perception function in a way that insures a subject is productive, manageable, and predictable, and is able to be socially integrated and adaptive” (4).

Is that what the airport meditation-rooms and corporate nap-rooms are all about? Are they here so we, either as stressed-out employees or sleep-deprived travelers, don’t freak out, and remain, in Crary’s words, “socially integrated”? To disconnect from a place completely also means to stop putting it into question. The meditation room does not ask you to think, much less think critically. Instead it asks you to relax, to assume the role of a post-critical observer who, meditatively and without passing judgement, watches his or her own thoughts drifting by like clouds in a LED-sky.

So, what is it that speaks against coughing up the hourly fee to rent a Snooze Cube, a Nap-Cab, or a Sleep-Box, some of which look more like tombs than bed-chambers, and to crawl inside and seal the exit, to close your eyes and dream of another world, altogether different, in which all demands are met and all desires are immediately and terminally fulfilled?

Philipp Röding is a PhD candidate in the Graduiertenkolleg Configurations of Film. He studied theater, film, and media studies at the University of Vienna; Goethe University, Frankfurt; and the University of Illinois at Urbana-Champaign. His first novel about the proceedings of a dysfunctional suicide hotline was published in 2017.