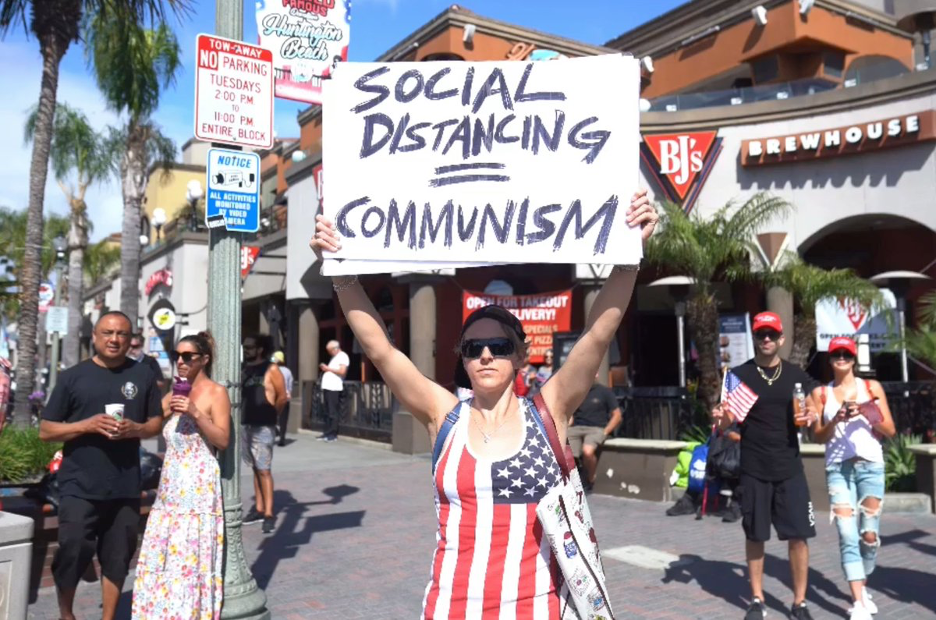 Society for Sick Societies is a diagnostic project. Built as a series of episodes, each one of its vignettes sets out to analyze an expressed symptom of a sick society–a practice, pattern, gesture, proverb, or technique that seems to encapsulate social malaise in pseudo or post-democratic societies. The triple S is critical theory’s first aid to a state of crisis, probing sickness as both real and symbolic, affecting the biological body, the social body, and the body politics. The series is edited by Laliv Melamed.

“Late fascism reacts against what is already a liberal reaction, it is not primarily counter-revolutionary.”

The woman in the photo was one of some dozen people who took part in a demonstration against the lockdown in Huntington Beach, Orange County, California, on April 17, 2020. Identified by the Los Angeles Times as Sarah Mason, she is holding a placard that says, “Social Distancing = Communism.” This confusing statement and the context in which it was raised, suggest not only a sick society, but a fatal illness of the social itself.

In the past decade, klepto-fascisms around the world have halted services through austerity and government shutdowns. The COVID-19 lockdown presented a moment in which shutdown and general strike could be confused. The unequivocal failure of the federal government in containing the pandemic generated social calamity and visions of a revolution. This is nowhere more apparent than in the poster “Social Distancing equals Communism.” As I think through the meaning of this sign, I would first like to suggest that Sarah Mason is not holding the sign alone. The placard, I would claim, and the logic it presents, were also held by what we can call the “Tiny Hands of the Market.” This is the name for the phenomenon of hugely intensified extractive powers of the super-rich and the further impoverishment of workers. Taking its name from the depiction of President Donald Trump’s hands and alluding to the capitalist magical fantasy of the “Invisible Hand of the Market,” a term used by Adam Smith’s followers, the Tiny Hands of the Market stand for the enormous consolidation of wealth by 0.0001% of the US population, at the expense of the working class—those thrown into the gig-economy and even other rich people. At a time when four hundred individuals have accrued the same amount of wealth as 60% of all Americans, it’s those tiny hands that are cannibalizing public wealth, puppeteering algorithmic management, and saluting fascism.

In the last three months, as COVID-19 has killed over a hundred thousand Americans and amidst directives to social distance, stay-at-home orders to minimize public activity, and guidelines mandating that non-essential workers work from home (when they haven’t lost their jobs), US cities have seen the largest rent strike in decades, at least 150 worker strikes and walkouts (most notably by Amazon warehouse workers), and hunger strikes in refugee detention facilities. At the same time, research shows that US billionaires increased their collective wealth by $282 billion in just twenty-three days during the initial weeks of the coronavirus lockdown. (Jeff Bezos of Amazon has made some $25 billion since the beginning of 2020.) And so, as working people experience economic collapse, the stock exchange is booming. The COVID-19 pandemic has exposed the existing class divide and driven millions of Americans into poverty, making inequality even more extreme.

Mid-April 2020 saw the emergence of these well-orchestrated, small anti-lockdown protests throughout the US. These demonstrations were attended predominately by white crowds, and, although miniscule in size, received huge media coverage and social media proliferation. We should see the under-reporting of workers’ strikes around the US in light of the disproportionate attention that has been given to these small right-wing rallies to “re-open the economy.” These protests were praised by administration officials and paid for by the wealthiest donors to the US Republican party, among them, the family of Betsy DeVos, the Secretary of Education. Receiving huge media coverage worldwide, these rallies included curbside picketing, the. blocking of entrances to hospitals, the creation of traffic jams in front of hospital driveways, and demonstrations in front of and inside state capitol buildings, including a temporary takeover of the state capitol in Lansing, Michigan by armed men. Following this incident in Michigan, a lawmaker was escorted by armed black activists to the state capitol.

The Communism in Mason’s sign follows good-old American Cold War-condemnation of the distortions of really-existing-socialism. In another photo from the same rally, Mason is seen holding a different placard that reads “Defy Fascist Lockdown.” The fact that the same person held two different placards using fascism and communism for the same form of condemnation invites further attention. The comparison of historical Communism with Fascism has been the bedrock of American Cold War liberalism. The political and moral equivalence between the “Two Totalitarianisms” was endorsed by Anglo-American liberals during the twentieth century—with historians, philosophers, economists, and thinkers such as Franz Borkenau, Ernst Nolte, Friedrich von Hayek, Hannah Arendt, and Karl Popper providing the conceptual framework for the comparison. But while liberalism ignores inequality (claiming equal opportunity), fascism and communism both acknowledge inequality—communism sees it as a social construction at the heart of capitalist class formation, and fascism perceives it as inherent racial discrepancy. In calling the lockdown “fascist,” the slogan here follows the usage of a well-known form of denunciation — “Fascist,” on this placard, seems to stand for criminal or unjust action by the government. If these arguments using Fascism and Communism aim to side with terminating the lockdown, then, the denunciation of social distancing as “communism” implies simply that the re-opening of the economy, as it is called, will re-assert capitalism. And through the reopening, one will be able to continue ignoring inequality. We might remind ourselves of Max Horkheimer’s 1939 dictum: “if you don’t want to talk about capitalism, then you should keep silent about Fascism.”

We are forced to recognize the immense inequalities proliferating with the pandemic and lockdown, with people losing their jobs, with gigantic bailouts that overwhelmingly benefit the biggest corporations and the already extremely wealthy, and with the ways those deemed essential workers are forced to keep working. In addition to these, we can observe how the technology at the heart of the gig economy has become the widespread logic of work under COVID-19. This technology pertains not to this or that algorithm, but to the shifting of costs to workers. From people having no sick leave, to teachers using their broadband and laptops at home to teach, households are performing all reproductive and productive labor. We can therefore recognize with COVID-19 an expansion of the logic of app-managed jobs. In Marxist terms, this is exercised in the circuit of money capital. Marx writes in the opening of volume two of Capital: “If we call labour-power L, means of production mp and the sum of commodities to be purchased C, then we have C = L + mp.  To abbreviate C < Lmp” (pp. 109-118). Thus, the whole circuit of money capital according to Marx operates along the lines of this equation: M – C <  Lmp … P… C’ – M’. Money buys means of production (mp) and labor power (L)—these two markets converge in C. This stage stands for acquiring machinery, hiring, training, and a whole set of relations that we learned to identify with direct employment. With this, production is set in motion to create a new commodity, which is then sold for more money than the original outlay. The intervention of the Tiny Hands of the Market is exactly here, where the worker brings with her the means of production. Directly, this happens with the Amazon delivery person or Uber driver bringing to work their own car, filled up with gasoline, with insurance and driver’s license all taken care of. Indirectly, this is manifested in student loans, where the worker brings into the workplace their training and indebtedness and in that ties their labor directly to finance (i.e., speculations on their debt). Thus, the ability of app companies to operate as marketplaces for gig jobs (Uber, TaskRabbit, and the like) cannot be reduced to some lines of code, but should be recognized as the ability to shift all those various costs in mp onto the workers. In the Grundrisse Marx already summarized this by saying that under capitalism, the productive powers of labor appear as the creative power of capital (Notebook III, December 1857). What was not-so-long-ago called the sharing economy, and was promised as tech-socialism, proved to be a furthering of capitalist extraction.

The vast accretion of wealth today relies on out of pocket expenses by the worker through her productive and reproductive labor, and through continued exploitation of tax-paid services and public infrastructure. With the Tiny Hands of the Market, you do not need to leave the house to get pickpocketed.

Between general strike and martial law, on top of the lockdowns, US cities were introduced in recent weeks to curfews and National Guard deployments. This was done to retaliate against the Black Lives Matter marches and demonstrations taking place throughout the country. These massive demonstrations were sparked by seventeen-year-old Darnella Frazier’s video documentation of the killing of George Floyd by a police officer in Minneapolis. News networks and newspapers gave special attention to the looting taking place in big cities in the afterhours of the demonstrations, referring to the property damage as “violence.” Beyond the demand for the demonstrations to comply with some imagined respectability, with debates around unjust looting versus just protesting—again we are witnessing one thing but see it as another. There is looting taking place amidst the pandemic, but it is that of corporate bailouts at the expense of working people. Policing is racial violence; there is  excessive violence from the side of the police against protestors, with militarized police forces rioting on live TV.

The anecdote in thesis XV of Walter Benjamin’s “On the Concept of History,” about the vandalizing of street clocks in Paris, recounts the story of the Barthélemy and Méry poem “Insurrection,” about the July Revolution of 1830: “On the first evening of fighting it turned out that the clocks in towers were being fired on simultaneously and independently from several places in Paris.” What that story tells us about the demonstrations today is not simply that there is a long history of urban revolts and spatial manifestations to social struggles—as Henri Lefebvre teaches us. Nor is it explaining that we shifted from strikes to riots with the nineteenth-century revolutionary scenario being organized around the pressures and demands at the point of production (factory), while the twenty-first century surplus revolts are conjured through pressures and demands at the point of circulation (market)—as Joshua Clover tells us. Those realizations are of course valid and valuable, but what the Black Lives Matter demonstrations present us with is history as “time filled by the presence of the now,” as Benjamin put it. As with the destruction of the clocks 190 years ago in Paris, these demonstrations taking place throughout the US and around the world, insist that this moment should do no less than “blast open the continuum of history.”

Joshua Simon is a writer and curator based in Philadelphia. He is author and editor of several books, among them Neomaterialism, Communists Anonymous, and Being Together Precedes Being: A Textbook for The Kids Want Communism. Currently Simon is a visiting critic at the Graduate Fine Arts program, University of Pennsylvania.