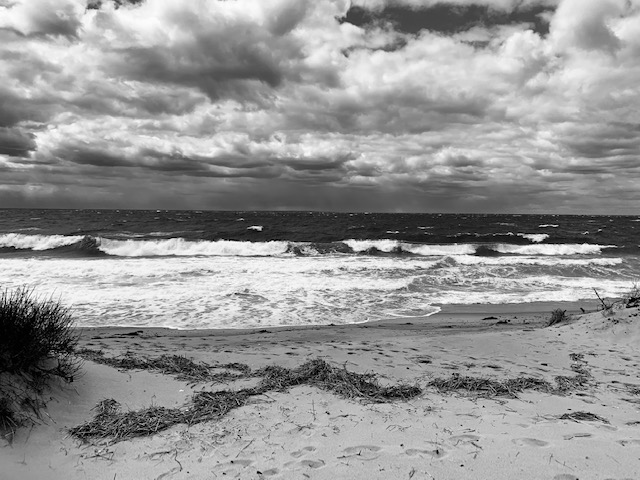 The nation state shuts its borders. It has frozen all transit and freezes you into place. The benevolent state, you are told, now fully controls the airways and highways. It sets up roadblocks and checkpoints. It organizes your intimacy. You do not mourn, you forget how to in this impossible and accelerated sur-reality.

To ensure your safety it locks you into the privatized space of the domestic. It shuts you into the patriarchal home. It shuts down the public square and tells all of you to increase your personal and social security. There are unprecedented risks to your public health. They give you this information belatedly, slowly, impartially. A germ bomb has hit planet Earth and has scattered. You face the unwanted unprecedented.

You see the face of an authoritarian president. If he is not one already, he will be one soon. The times demand it, you hear them say. The times demand a strong hand and tough decisions. They amplify the whispers of the generals. They work to reinstall the unseated propped up father of the nation. The lunatic figure does their puppet work for them all the while projecting confused shadows onto steel walls. They increase the demand for Him to play the role of a chaotic agent and to install broad measures of social control.

You look down from your second story window onto the streets below. It is curfew now, and it will be curfew soon again. You watch as the shadow people quickly shuttle back and forth to purchase their provisions. They stockpile their ass paper in small closets. Onto neat shelves they organize their wiping. You fear, as they do, you might all soon be wiped out. The great equalizer, they keep calling it. A shrewd calculus of numbers that are updated on the daily, by the hour, then by the minute and micro-second.

Your phone also sends you updates with newer, better, and screen savable graphics. These are mutable demographics. Numbers that are meant to hide. The updates come with mealy mouthed instructions: Stay indoors, says email 10. This is what we are doing to prevent community spread, comes email number 11 through 111. You did not hear from your place of employment until email 234: “Five tips for Your Mental Health,” and you look at the signature line and cannot help a smirk. It is signed by your diversity officer.

You too wonder how to be more productive, how to produce for a cancelled culture, how to produce for a failed world. A simplified way of dressing, a stripped-down existence. It’s good that bleached paper is not available, you keep obsessing. It is so bad for the environment you catch yourself thinking. It is not too late to make a fashion mask you perkily remind yourself, parroting the most recent how to. A faint memory, you remember once reading and enjoying Love in a Time of Cholera.

There are those who suffer more. Pain is differential, they keep telling you. Thank you. You could have forgotten this if it were not for the richest among you always throwing their dirty package your way. You won’t touch this one, even with the thick plastic gloves that coat your fingers and the gas mask that has become the new uniform. Really? Differential? Did they see those feeding upon the waste before sundown? Did they hear the giant rats scratching at the door? In the middle of the night you were used to hearing planes and are now awoken by another sound. Instead of the airplane’s carbon release you hear “can’t breathe.” The toxic air is pregnant with premonition, it is worse than any gothic imagination.

In the face of the pandemic, the nation state settles into familiar colonial and modern operations. First carefully, then explicitly it triages for the privileged and the wealthy. It continues to work on behalf of possession and dispossession. The state bides its time, it begins to rule over it. It forces volatility, spikes in numbers of people and dollars. It tries to convince you they are the same. You begin to ask the question that all the living of your species seem to be asking: Is there a way to escape what is coming? Is there a way to subvert a global political order that so effortlessly promotes accelerated death?

You are angry with yourself for having settled for the comforts of incremental reforms despite your rhetoric. Without fully acknowledging the sea change, you have all been cradling in the dictator’s lap. You let him pat your head like an abused child. You let him comfort you as you watched new obscenities, the heads of new bounties accumulating. The institution you labor at offered up its profit to the machine. The stockpile of bleached paper grew. The language weakened, the border fortified. You thought that the everyday texture of social life would prevail. You drew the fool’s card. Towards the end, you could not speak loud enough, even for your collective defiance.

In 1986, towards the end of the Pinochet dictatorship in Chile and amid deepening economic crisis, the poet Pedro Lemebel delivered a manifesto. It was called “Hablo por mí diferencia,” “I Speak for My Difference.”

I’m not Pasolini asking for explanations
I’m not Ginsberg expelled from Cuba
I’m not a fag disguised as poet
I don’t need a disguise
Here is my face
I speak for my difference
I defend what I am
No soy tán raro
I’m not so strange
Pero, Injustice stinks
And I am suspicious of this democratic dance
But don’t speak to me of the proletariat
Por que ser pobre y maricon es peor.
Because to be poor and queer is worse.

The market had you all believe you were all “lo raro.” The strange ones, the ones that expressed your gorgeous difference. Lemebel would laugh at you now. He would stick his middle finger up at you. He knew better than to make bed friends that hung out in the comfort zone.

Lemebel was a Communist. They knew the periphery, the uneven edges of sexual and planetary difference. They knew enough not to dance with democracy. Not to be seamlessly choreographed into the grips of the nation state. At the height of the AIDS crisis, with Francisco Casas they created Las Yeguas del Apocalipsis, The Mares of the Apocalypse. In the censored public square, they railed against the gringos: “Performance, we didn’t even know that that’s what we were doing.” They did not rehearse to reorganize the patriarchal family. Instead, they experimented into the space of friendship and disappearance. They performed, as you all will learn to, the impossible ritual of mourning.