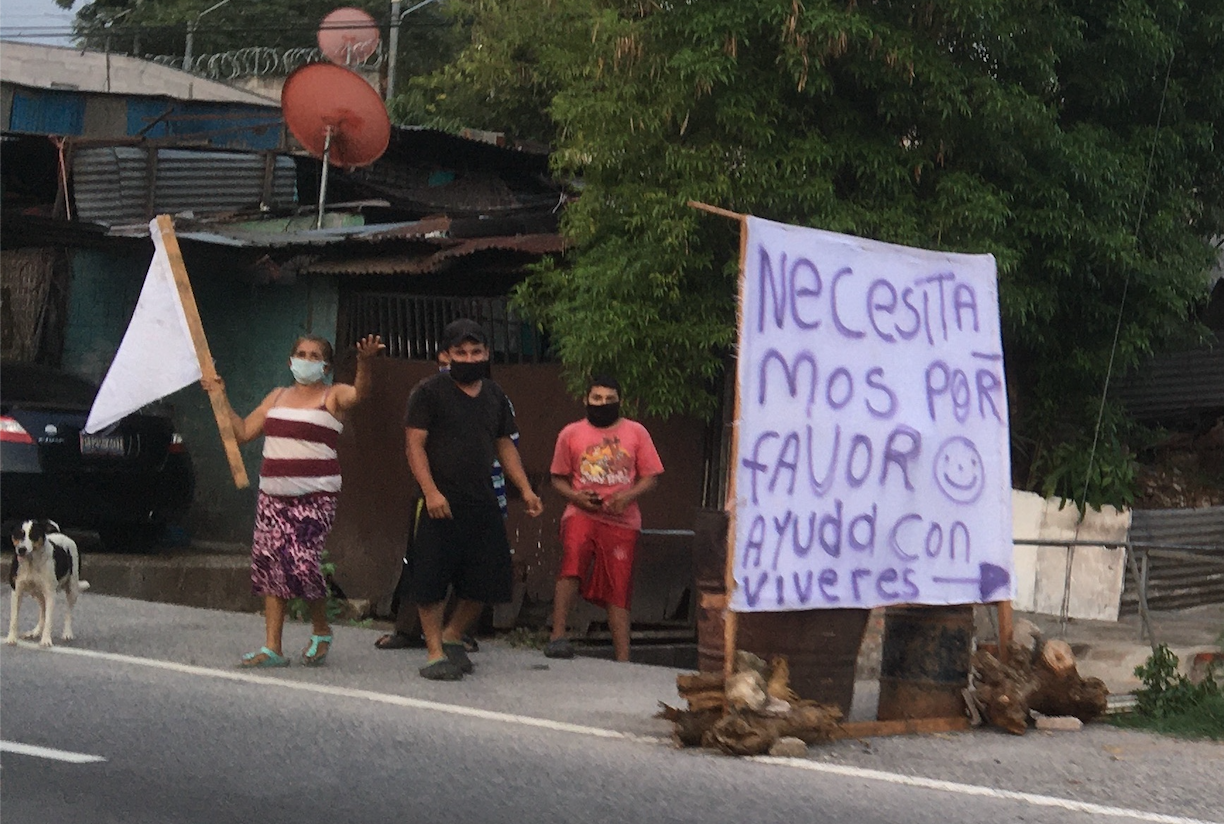 In Central America under Covid-19, specifically in El Salvador, Guatemala, and Honduras, white flags have appeared all over the social terrain as indictments of a failed political and economic system whose primary effect for common people has been enduring a life of dehumanization, precarity, and marginalization. These now unignorable conditions, aggravated by the pandemic, visible in the corridors and passageways of the “popular neighborhood” are the direct effect of extreme forms of exploitation compounded by historical land privatization and regimes of extraction, a crude yet naturalized expression of profit over people. The wealth enjoyed by the oligarchic few in these countries is a consequence of these myriad extractions, grafts from the bodies of the immiserated, their slow death a necessity for economic maximization.

These white flags then, draped on windows, on doors, hanging perilously from lampposts and torn steel sheets that optimistically shield families from the fumes and sounds of passing traffic, are a prism for seeing the reality of damaged life in these humid climes. From the corroded steel of the Central American slum, the functions of the white flag are multiple: a sign of defeat, a request for parley, an appeal to Christ, a cry by the disempowered and silenced poor. Under neoliberal capitalism, in the middle of what scholars of the Tricontinental Institute have called the “coronashock,” the white flag is the political form that the communities of the wretched are deploying to articulate their capitulation to the very forces that produce, maintain, and benefit from fixing surplus lives, their lives, at the edge of starvation.

El Salvador isn’t a warzone of the 1980s type anymore. These aren’t communities asking for a ceasefire, or groups communicating their non-affiliation to the belligerents of an armed struggle for safe passage. The white flags that were once strategies used by civilians to distinguish themselves from formal combatants, or to escape neighborhoods that had turned into grotesque scenes of war, are no longer. Since then, the meaning of the white flag has transformed. Beyond mere surrender, the white flag has also come to symbolize, as Salvadoran artist Carmen Elena Trigueros meditates, a triumphant emblem for the truce that defined the 1992 Peace Accords.

Trigueros’ Bandera (2017) is a piece composed of a series of variously textured white sheets stitched to form a continuous garment—using tablecloths, to parts of dresses, to pillowcases, cotton to linen, to mosquito nets. Bandera reflects on the tentative fabrics that hold together Salvadoran peace, a study of the fragility of harmony in the twenty-five years after the Salvadoran Civil War. Trigueros’s work offers a layered depiction of the social fabric as material, a semblance of hope for peace in a country fragmented. The various individual pieces of cloth are not only signifiers of the tenuous postwar world but also motion towards a critique of the country’s political economy—that is, the very apparel manufacturing central to the country’s postwar industrial model. In El Salvador, the garment maquila remains one of the country’s primary capital-generating sectors, made possible by an endless stream of cheap labor, often deterritorialized workers, who toil on factory floors, or as ready-to-be-exploited migrants.

Trigueros’ piece is a useful work for reflection, for thinking the white flag’s social appearance as a kind of continuity that indexes recent events: starting in the war, to the post-1992 accords, and onto the making of the contemporary working poor. Like Bandera, today’s white flags are made out of the same found materials of the home: from Salvadoran-made but US—purchased t-shirts, worn bedsheets, curtains, old rags. Each flag under Covid-19 represents then, from the perspective of popular family life, a reality marked by everyday poverty, marginality, and organized abandonment. These white flags, unlike the flags of war and peace that dominated the wartime interval, instead render life’s stresses on them by centering the economic: “We’re in need, please help with food,” “We need water,” or misspelled variations of “we want help.” Textile blankness, too, voices indignation at an equally deafening volume.

Expectedly, food insecurity across the world has risen dramatically in the duration of the coronavirus. The virus has demonstrated that the already immiserated, the vulnerable to hunger, the immunosuppressed, are the ones who remain at the mercy of Covid-19. From my standpoint in semi-rural El Salvador, the stresses that come with continued quarantine are, for many poor families living on less than $5 a day, enough to push them onto the streets to request help to possibly satiate their empty bellies. These are communities, though unexceptional in the worlds created by transnational capitalism, whose malnutrition and social weakening are preexisting conditions to pandemic impact. We’re two months into a mandatory, military-enforced quarantine where vulnerable communities have received little resource help, and when that help does eventually arrive, it will already have been inadequate.

Raising the white flag is not just a question about food and water but also about the access to dignified housing as realities across the planet continually remind us. In El Salvador, for example, the neighborhoods most affected by militarized quarantine have been those with steel laminate shacks with, in many cases, dirt floors. The virus arrives to the region at the beginning of monsoon season, where the effects of nightly rainstorms wear away at dusty floors thereby exposing the deficiencies of households through likely fallen walls, leaky roofs, air gaps, accumulations of mud. The Salvadorans who work in the informal sectors as housekeepers, street vendors, marketplace sellers, or in public transit, are the most hard-hit here, their precarity magnified by the already fragile economic fabrics characteristic of what is usually an ordinary, tolerable, and ignorable poverty.

Hunger in El Salvador, in this instance, does not publicly manifest as a hunger strike in the classical sense. These gatherings are not a threat to politics as usual as they will quickly be assuaged by government aid along with the philanthropy of citizen help and solidarity. However, these efforts will not, in the end, offer solutions to long-term food insecurity, ever. Thus, these strategies for popular survival expose market society’s dehumanizing contradiction, revealing its sacrificial order, the brutal calculus that determines whose life is worth preserving.

Epidemic disease and natural disasters have long made difficult the possibility of social reproduction in El Salvador and in neighboring countries like Guatemala and Honduras. In some sense, coronavirus conditions are not new. Long-term effects of the pandemic will soon emerge after the emergency subsides, likely prompting new waves of migration to historical destinations like Los Angeles, Houston, New York, DC, and possibly new routes to places suffering from labor shortages, towards the large cities of the Midwest and the American South.

In a recent article in Social Text, Josie Saldaña-Portillo correctly asserts that Central Americans have been sutured to the US imaginary as a perennial enemy to the imperial nation-state, and that notions of liberal US citizenship are dependent on the unprotectedness of the Central American family, specifically that of Central American women. From the harms of the state to the neighborhood-level activities of local gangs, poor families are multiply criminalized and stripped of safety, undeserving of social protection. This holds true of today’s white flag carriers: poor women representing the interests of households, neighborhoods, and the complex local economies that, necessarily, cross gradients of il/legality.

The total human toll of coronavirus in Central America will be unprecedented, no doubt. But its attritions—the famine, the traumas, the latent health issues that remain in its wake—will be truly ghastly. Central American nations like El Salvador have improvised their way through the emergency moment, often addressing the pandemic politically rather than addressing it with medical and social expertise to strengthen community resilience. Governments have taken on conditional debt from international lenders, barreling society towards multi-generational indebtedness. These new debts will be paid by the future poor, by the descendants of those currently living through the shame of need, by those very communities who today request state compassion to make life livable in the near-term.