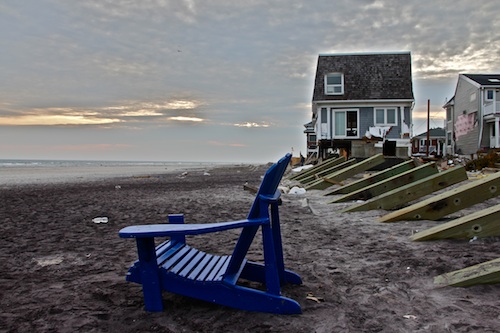 New York City has nearly six hundred miles of coastline. Four of the city’s five boroughs are built on islands, and New York is linked together by a network of bridges and tunnels that soar over and plunge under the waters of our maritime home. We live, as May Joseph recently reminded us, in a fluid city. We turn our backs on the dangerous waters that surround us to our great peril. Yet for many years this is precisely what we have done. This is the story of how we forgot the sea.

For many years, experts of various stripes have been warning about the threat posed to the city by climate change-induced rising tides. In 1999, for example, the Environmental Defense Fund published a report titled Hot Nights in the City: Global Warming, Sea-Level Rise, and the New York Metropolitan Region. A decade later, MoMA and P.S.1 collaborated on a design competition, Rising Tides: Projects for New York’s Waterfront, that was intended to explore innovative solutions to the city’s heightened vulnerability to storm-surge induced inundation. Yet when Hurricane Sandy struck New York a year ago, the city seemed almost totally unprepared for the infrastructural and human emergencies provoked by this natural disaster. Numerous factors combined to make New York vulnerable to Sandy, but underlying them all was the fact that we’ve largely forgotten our city’s links to its maritime environment. New York was born from and nurtured by the water that surrounds it. Before European colonizers arrived, the great oyster shoals in the bay that forms the city’s natural harbor were a key resource for the Lenape people who lived on Manhatta island. The city was an early if relatively unimportant node in the globe girdling networks of the Dutch trading companies that linked the East and West Indies. When Nicholas Bayard opened the country’s first sugar refinery on Liberty Street in downtown Manhattan in 1730, he ensured that New York would become a key port in the triangular economy of the Black Atlantic, drawing sugar, cocoa, limes, and other products from the Caribbean. The African Burial Ground monument reminds us that New York was a city not simply built on the slave trade, but one populated by slaves and slave-owners. The financial might of contemporary New York, the banking and stockbroking industries that make New York a global city, is founded on this history of maritime trade, trafficking, and tribulation.

If the sea surrounds New York, so as well did its docks, slips, pubs, inns, and other forms of port life. Manhattan and Brooklyn in particular were defined by working waterfronts studded with ships, warehouses, and dockworker communities. Yet if New York’s elite drew their incomes from this maritime fringe, they were intent on focusing their attention and their leisure time elsewhere. Manhattan’s rich chose not to gaze out to sea but to gambol through the ersatz bucolic wilderness of Central Park, while

Brooklyn’s elite similarly looked inland toward Prospect Park. For these elites, the denizens of the waterfront lived lives of shocking squalor and violence, an attitude conveyed in Elia Kazan’s classic muckraking film On the Waterfront, which decries mob control of New York longshoremen’s unions and lives. When Kazan’s film premiered in the mid-1950s, however, New York’s port and the culture that it supported was about to be wholly uprooted. The invention of containerization, as Marc Levison argues in The Box, entailed a wholesale series of material and cultural shifts. No longer were armies of dockers needed to pack and unpack cargo ships. Huge container ships such as those that currently ply international waters, bringing products like clothes and cars from factories in distant lands, needed deep-water berths and huge cranes to pack and unpack their cargo. Shortly after the release of On the Waterfront, building in part on the scandal about waterfront corruption that the film dramatized, New York moved its port facilities to Newark Bay, New Jersey. The dockland culture that had characterized New York since colonial days disappeared like a name written in water.

Two decades of neglect and decay followed. Once home to majestic ocean liners like the Normandie, piers along Manhattan’s West Side crumbled into the Hudson, which had itself become a toxic stew of PCBs and other dangerous chemicals washed down the river from upstate industrial works. By the late 1970s, some of these piers were transformed into shelters and cruising zones for the city’s vibrant gay subcultures. Moral crusading in the age of AIDS combined with real estate speculation to transform the piers to what they now are: jewel-like public spaces attached to some of the world’s most expensive private property. Other parts of New York’s waterfront, including large tracts of the Bronx and Staten Island, are still dominated by various forms of industry, with all the pollutants that this entails, but the coveted waterfront of downtown Manhattan has been opened to the public. Like the cleanup of the Hudson, this transformation surely must be regarded as a success story. To what extent, however, is this sea change the product of past attitudes towards the city’s maritime history?

The leisure-based landscape aesthetic that characterizes Battery Park City, the West Side greenway, and other similar initiatives is the product of a culture that has largely lost a workaday connection to the sea, with both the sense of awe and fear that such a quotidian connection inspires. Since the spread of mass air transport, few of us travel long distances on the surface of the planet’s oceans. Even fewer of us actually depend directly on the sea for our livelihoods. In the words of the filmmaker Alan Sekula, the oceans have become the world’s “forgotten space,” an occult zone absolutely crucial to global economic exchange and yet almost totally elided from cultural representation. So much is this the case that we have tried to treat the city’s maritime environment the same way that way Olmsted and Vaux’s famous design for Central Park treated the terrestrial environment: as a carefully sculptured simulacrum of an ideal natural space, with glades, glens, and arbors designed, like the English gardens whose designs Central Park builds on, to reflect and foster the moral equilibrium of the citizens who ramble through them. So when warning notes such as the Hot Nights in the City report were issued, the state, the only entity capable of building urban resilience systematically, largely ignored them, occupying itself instead with greasing the

wheels of the downtown real estate bonanza and relying on disaster management agencies to step in in the unlikely event of a hundred year storm.

But the sea is no placid park. One year ago, Hurricane Sandy reminded us of the enormous power of the maritime environment in which we have built our city. Ironically, that power is to a certain extent a function of the massive fossil fuel energies that we ourselves have discharged into the environment. Yet, as with so many other aspects of life on the waterfront, this sea story is one of combined and uneven peril. Like all natural disasters, that is, Hurricane Sandy brought unequal experiences of decimation to the city that often reflected deeply inscribed social inequalities. One year later, working class communities in Staten Island and Queens are still struggling to overcome the impact of the superstorm, while downtown Manhattan has been pumped dry and has largely returned to life as if Sandy had never turned off power, flooded subways, and uprooted lives. And, while Major Bloomberg has overseen ambitious plans to insulate New York from the next hurricane, around the world, in global cities such as Dhaka and Bangkok and in island nations such as Samoa, the terrible power of the sea grows more palpable with each storm season.