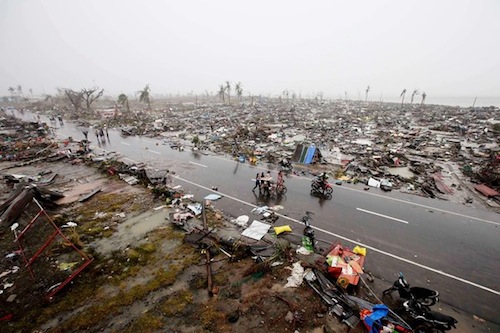 As we wound down this dossier on Hurricane Sandy and NYC, Typhoon Haiyan/Yolanda struck the Philippines a devastating blow. The still-unfolding tragedy is a stark reminder of the fact that climate change is not experienced evenly. While Hurricane Sandy did billions of dollars of damage to the New York region and has left many struggling, this impact pales in comparison to the scale and extent of human suffering induced in the Philippines.

We are witnessing what might, to appropriate a phrase of Trotsky’s, be called combined and uneven disaster. No disaster is natural, and events like Sandy and Haiyan make it clear that disaster is meted out more and more unequally. In the case of climate change, those least responsible for polluting the atmosphere are, tragically, the most vulnerable to the myriad destructive impacts of global warming.

This image from an article by the Lancet makes this bitter historical fact graphically apparent: The upper image illustrates historical greenhouse gas emissions, with global North nations such as the U.S. and U.K. distended to reflect their disproportionate consumption of fossil fuels as they industrialized. The lower image reflects projected mortality rates linked to climate change, with Sub-Saharan Africa and South Asia ballooned out to demonstrate how imperiled they are by current trends.

It should also be noted that Typhoon Haiyan/Yolanda struck the Philippines less than a week before the beginning of the latest UN Climate Conference in Warsaw, Poland. Once again, emissaries from the nations of the world have gathered to discuss the fate of the planet and future generations. Previous meetings have done nothing more than establish various forms of green washing.

We can only hope that the devastation of the Philippines will galvanize significant action among the delegates from the global South in opposition to the obstructionism and obfuscation of delegations from countries such as the U.S.