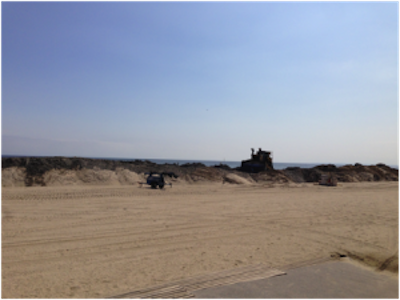 Approaching Broad Channel en route to Far Rockaway, flotillas of ducks frolic, planes take off from John F. Kennedy Airport, and in the distance, the Rockaways loom, surrounded by a placid expansive bay. It is a flawless, sunny October a year since Hurricane Sandy ravaged this region of New York, paralyzing its residents and severing it from the mainland for seven months. Storm damage had destroyed the A train and S train tracks extensively, buckling them like playthings to be disposed. Without the subway connections, Far Rockaway was unmoored like a giant ship sinking gradually, its misery too far out to sea to be perceived by the rest of New York. The Rockaways are outer barrier islands to New York City. Their ecology is varied and vulnerable to storm surge. Marshes, sand dune barriers, settlements on stilts, are some of the landscapes shaping the elongated sandy strip.

Hurricane Sandy decimated the region. Once a forgotten outer borough fabled for its great surfing waves, the Rockaways are now the focus of massive Sandy recovery efforts. I chatted with some of the merchants, residents and recovery workers, many of whom lived in the area. The anniversary was bearing a weight on memories, a sense of vulnerability and emotion hung in the air on Beach 116, which bore the brunt of the storm surge’s ferocity. Beach 116 is a moody, melancholic street, book ended by two New York memorials. The first, on the Jamaica Bayside, is a tribute to the three hundred First Responders of Far Rockaway who died in 9/11, the other, on the ocean side, a memorial to Flight 587, which crashed at the site en route to the Dominican Republic in 2001. The street’s peculiar topographical structure of slopping downward from the Atlantic ocean to the bay, left it vulnerable to storm surge in a way that was entirely unforeseen. The area turned into a bowl of seawater pouring downward toward the bay. Entire commercial enterprises and businesses along 116th street were destroyed, as water eight feet high washed out everything in its wake. Speaking to Liz Smith-Breslin of the charming seaside store “The Blue Bungalow” was heart wrenching. Liz lost her entire photography inventory and art merchandise along with infrastructural damage that took a long time to restore. Mike of Café Paninico along Beach 116, had to gut his restaurant and start from scratch rebuilding his café. The water had climbed more than half way to the ceiling destroying everything in its path.

What makes the Far Rockaways case so critical is the way fecal sludge, sanitation sewage and sandy detritus combined to produce a toxic wasteland still hard to imagine. The combination, in addition to the mold, breakdown of transportation, and severing of access to the mainland along with the region’s political marginality, dramatizes many of the problems faced by vulnerable coastal communities.

A year after Sandy, the area continues to feel its staggering loss. Residents speak with a resilience that is admirable, despite the cloudy eyes and choked voice, when invoking the memory of last October. I ask one of the recovery workers, a man called Dillon, who has lived in the neighborhood for thirty years, and is now building the foundations for the permanent Life Guard stations being constructed, if he continues to live here. He looks at me for a minute, and answers resolutely, “This is my home.”

I ask where all the sand came from. Dillon looks around him with love and tells me the new sand that fills up the destroyed landscape came on barges dredged from the sea. The glistening dunes of sand are going to be flattened for the new boardwalk that will be built. A large wall is going to provide a surge barrier between the boardwalk and the sea. In the meantime, large black sandbags block buildings from possible surges. A flimsy wooden fence roughly outlines where the future wall is going rise.

I am moved by Dillon’s steadfast surety of his love for place. As I head back to the more cosmopolitan and ungrounded terrain of Manhattan, I pass the doorway of the Flight 587 Memorial, which has inscribed above it “Afterwards I want only Peace”. Leaving Far Rockaway, the subway rocks past the very touching scene of a family picnicking on the subway tracks facing the bay just as the train crosses Broad Channel. They are immersed in their precarious but soaring landscape. May Joseph is a puppeteer, theater director and Founder of Harmattan Theater in New York City. Joseph is Professor of Global Studies in the Department of Social Science and Cultural Studies at Pratt Institute, New York.  She has written widely on globalization, urbanism, performance and visual culture. She is the author of Fluid New York: Cosmopolitan Urbanism and the Green Imagination (Duke University Press, 2013), as well as Nomadic Identities: The Performance of Citizenship (Minnesota, 1999) and coeditor of Performing Hybridity (Minnesota, 1999).