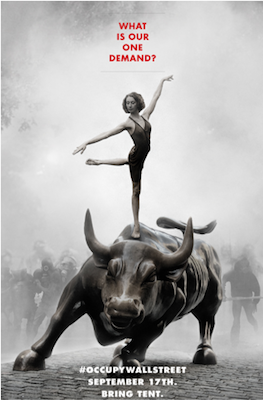 “What does Occupy Wall Street want?”  This anxious media meme was yoked to the increase of Occupy protests in 2011.  Against the backdrop of other, more angry, characterizations of the Occupy protestors as deservedly unemployed, lazy, or overinvested[1] in idealistic values like social justice, anti-racism, feminism, and anti-capitalism, this media narrative suggested that Occupiers could not even do the “work” of protest adequately. “What,” the media seemed to suggest, “do they want us to know?” This public handwringing over Occupy’s “feckless” messaging recalled for me, Herman Melville’s weird little 1853 novella, “Bartleby.” In the Age of Occupy, I want to examine the ways in which Melville’s tale demonstrates how an idle character like Bartleby might represent a force for revelation, disclosure, and investment by other, nominally privileged subjects.
Originally appearing in Putnam’s under the title, “Bartleby, the Scrivener: A Story of Wall Street,” it is a resonant earworm of a tale: “I prefer not to” is the familiar and vexing refrain repeated by Herman Melville’s inscrutable character, Bartleby. Bartleby is a clerk, a law copyist, who, in a manner, “establishes” himself in New York’s financial milieu, not through the typical tale of hardworking rags-to-riches masculine individualism, but rather through his blanket resistance to that genre of celebratory narrative. Despite the kinetic context of money, men, and economic exchange implied in Melville’s title, Bartleby occupies his employer’s offices, eventually refusing to work and refusing to leave. Eventually ejected from the premises by a subsequent tenant of the offices at No. __ Wall Street, Bartleby succumbs to jail and starvation in his very resolute “do-nothingness.”  The frustrating negotiations between Bartleby and his employer constitute the primary “action” of Melville’s novel.  We can anticipate, by tale’s end, that Bartleby “prefers not to.”  And this is necessarily yoked to an equally persistent refrain in the novel:  What in the hell does Bartleby want?
Melville’s tale, however, doesn’t ultimately reveal “what Bartleby wants.”  Despite the lawyer’s unrelenting gestures to bring Bartleby around, (including the final, climactic rhetorical incorporation into the social body “Ah Bartleby! Ah humanity!”) the message from Bartleby is clear, and it echoes (like a mic check) throughout the novella: he prefers not to.
As a pithy and intensely focused example of relations “between men,” Bartleby and his employer (at least nominally) stand in for a model of homosocial power relations buoyed along by the masculine fraternity of Wall Street.[2] In terms of the players on Wall Street during our current Great Recession, masculine homosociality (the old boy’s club) is hardly an anachronism. But, as the image of Bank CEOs testifying before Congress might illustrate,  the risk-taking, upwardly mobile man remains a staple figure of Wall Street.[3] Through an insistent dependency[4] upon his employer, Bartleby exaggerates the bonds of the homosocial — what Eve Sedgwick called “the structure of men’s relations with other men” (Sedgwick 2) — capturing and heightening the anticipation of ascendancy that is supposed to temper, and eventually transform the subordinate man’s position. “Bartleby” chronicles the disruption and dismantling of a continuum of feeling and financial interest meant to unify Wall Street’s players.
Bartleby is employed in the law offices of an unnamed attorney, “a rather elderly man,” who, by his own admission, lacks ambition. Thus, rather than the generic conceit of “upward” mobility meant to signify masculine (active) behavior, the lawyer admits that, “I am a man who, from his youth upwards, has been filled with a profound conviction that the easiest way of life is the best”  (Melville 4). Contrary to the dynamic narrative of masculine self-making, the lawyer admits:

I am one of those unambitious lawyers who never addresses a jury, or in any way draws down public applause; but in the cool tranquillity [sic] of a snug retreat, do a snug business among rich men’s bonds, and mortgages, and title-deeds. All who know me, consider me an eminently safe man. (Melville 4)

After trumpeting this “snug business,” lubricated by the wealth of other men, the lawyer goes on to profess his dependency upon career appointments and the favorable regard of powerful men such as John Jacob Astor.[5] The lawyer reflects that Astor, “a personage little given to poetic enthusiasm, had no hesitation in pronouncing my first grand point to be prudence; my next, method” (Melville 4). In saying this, the attorney situates himself as a kind of disciple of Astor’s supposedly reserved manner, representing himself as a man pronounced prudent by a prudent man. This doubling of reserve between Astor and the attorney, however, acts as a revelation. The lawyer continues, again using the full name of his patron: “I was not unemployed in my profession by the late John Jacob Astor; a name which, I admit, I love to repeat; for it hath a rounded and orbicular sound to it, and rings like unto bullion. I will freely add, that I was not insensible to the late John Jacob Astor’s good opinion” (Melville 4). Ventriloquizing (and repeating) Astor’s opinion (and full name) and then, through a series of double negatives, telling us that he was in Astor’s employ makes him the beneficiary of Astor’s wealth in ways both rhetorical and literal.
It is this homosocial dynamic that the lawyer attempts to replicate with his newest law copyist, Bartleby. In effect, the success of other men is supposed to have a palliative effect upon the “lesser” man; his station is bearable because of his access to and identification with other men. Instead of identification, refusals and preferences start to overwhelm the office. The lawyer remarks, “Somehow, of late, I had got into the way of involuntarily using the word ‘prefer’ upon all sorts of not exactly suitable occasions. And I trembled to think that my contact with the scrivener had already and seriously affected me in a mental way. And what further and deeper aberration might it not yet produce?” (Melville 27). It is as if “preferring not to” threatens to undermine the psychic (“mental way”) the lawyer conducts himself. Appropriating “preferences” as both a linguistic and structural problem threatens the homosocial dynamics of the office because it calls authority into question — it makes the exercise of power an object of study and curiousity.  An exchange between the lawyer and Turkey illustrates this to comedic effect:

“With submission, sir,” said [Turkey], “yesterday I was thinking about Bartleby here, and I think that if he would but prefer to take a quart of good ale every day, it would do much towards mending him, and enabling him to assist in examining his papers.”
“So you have got the word, too,” said I, slightly excited.
“With submission, what word, sir,” asked Turkey, respectfully crowding himself into the contracted space behind the screen, and by so doing, making me jostle the scrivener.  “What word, sir?”
“I would prefer to be left alone here,” said Bartleby, as if offended at being mobbed in his privacy.
“That’s the word, Turkey,” said I — “that’s it.”
“Oh, prefer?  Oh yes — queer word.  I never use it myself.  But, sir, as I was saying, if he would but prefer — “
“Turkey,” interrupted I, “you will please withdraw.”
“Oh, certainly, sir, if you prefer that I should.” (Melville 27)

Bartleby’s proximity and casual interjection rehearses his connection to the word “prefer,” but the effort to determine what the hell Bartleby wants also exposes the habits of Turkey (drinking) and the lawyer (laziness).
At a later point in the narrative the lawyer offers a series of alternative career paths in order to dislodge Bartleby from the office: a clerkship in a dry-goods store; a bartender’s business; a bill collector; finally, exasperated, the lawyer suggests, “How, then, would going as a companion to Europe, to entertain some young gentleman with your conversation — how would that suit you?” (Melville, 40). The clerk’s answer, at this point, is predictable. Bartleby’s passivity forces his interlocutor to become more agile; Bartleby’s “preferring not to” refuses disclosure yet, at the same time, implicitly invites further inquiry and engagement — ultimately forcing the lawyer to become increasingly explicit in an effort to coax something out of the preference to do nothing and say little.
Bartleby eventually retreats into silence in the final pages of the tale, while the lawyer continues his frenetic attempt to discover more and draw out his truculent clerk. Even in the absence of Bartleby’s refrain, the very routinization of Bartleby’s speech, juxtaposed with the increasingly overanimated reaction of the attorney, seizes upon an important function of the occupation of the lawyer’s office. That is, Bartleby’s “standing reverie” draws us in, and highlights the network of wealth and power that sustains the Wall Street office that employs and later rejects him. Likewise, the strategy of Occupy, its proximity to power and wealth, might be more revelatory than muscular.
Works Cited
Melville, Herman. “Bartleby.” In Billy Budd, Sailor : And Other Stories. Ed. Frederick Busch. New York, N.Y.: Penguin Books, 1986. 3-46
Miller, D. A. The Novel and the Police. Berkeley: University of California Press, 1988.
Sedgwick, Eve Kosofsky. Between Men: English Literature and Male Homosocial Desire. New York: Columbia University Press, 1992.