Skip to content
From: Work and Idleness in the Age of the Great Recession
By   John Andrews March 28, 2013 Tags burnout, Chicago School, economy, Paolo Virno, Reaganomics 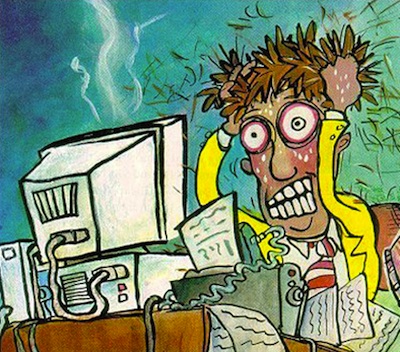 Marcia D. works at a suicide prevention center in California. Her job is emotionally draining and requires a great deal of dedication. As with other social workers, Marcia probably got involved in such work because of her commitment to helping people. However, in her particular job at the suicide prevention center, Marcia found that most incoming calls were from clients referred to as “chronics,” those who call frequently — sometimes every day for weeks — but are not seriously considering suicide. Marcia’s experience is not unusual: many workers at the prevention center invest copious time and energy to so-called chronics only to discover that they have been calling for years. Obviously this is frustrating for social workers who enter the profession with high levels of idealism. Marcia reflects: “Sometimes I catch myself thinking, ‘I wish a real suicide call would come in, so I could use my skills and handle it successfully. It would be an exciting challenge, not like all this tedious, humdrum stuff.’ And then I think, ‘My God, what am I saying? I want someone to try and commit suicide? Just so I can be a hero?’ It’s awful, but sometimes I feel like that.”[1]

Marcia D. is at risk for burning out; she already exhibits several tell-tale symptoms of it: cynicism, boredom, depersonalization. In clinical and social psychology, the term burnout was introduced[2] in 1974 to describe a kind of physical, emotional, and cognitive exhaustion among individuals who perform “people work” such as teachers, nurses, and social workers like Marcia D. By 1981, the First National Conference on Burnout was held in Philadelphia, PA, bringing clinicians, scholars, and business leaders together with the goal of defining protocols for diagnosis, treatment, and prevention of burnt out workers. A fundamental goal of the conference was to define or at least concretize the problem. Burnout was not just occupational stress and its symptoms exceeded better-documented conditions like depression. Yet burnout’s symptomology seemed to be so disparate that there was difficulty locating any definitive pattern or consensus. These definitional problems notwithstanding, burnout was consistently viewed as a growing problem, one with significant psychological and economic costs, and requiring serious attention. According to the conference proceedings, “the First National Conference on Burnout is unusual in that it is deliberately designed to…attract wider audiences interested in using the knowledge developed through research, theory, and post applications.”[3] The increased instances of individual burnout and the subsequent demand for wider-ranging attention to it and intervention signal a larger historical significance. Clearly, burnout indicates a paradoxical problem with regard to labor: it is an inability to work precisely due to an overinvestment in it, what leading burnout researcher Christina Maslach calls “the cost of caring.” Because people-work demands tremendous dedication and energy, those who give too much to their work, who fail to establish an equilibrium between work and non-work, risk reaching a breaking point beyond which coping is no longer possible, a total psychic and corporeal depletion.[4] Yet Maslach insists that burnout be viewed not as an individual flaw or defect, but as a situational phenomenon where organizational settings frame the likelihood (or not) of employee burnout. Nonetheless, the persistent displacement of structural failure into individual failure has been a triumph of neoliberal ideology. In this context, I suggest that burnout foregrounds the emotional situation of this particular historical moment of the early 1980s. For Italian philosopher Paolo Virno, the emotional situation refers “not to a cluster of psychological tendencies, but to ways of being and feeling so pervasive that they end up being common to the most diverse contexts of experience.”[5] Indeed, burnout brings to light a range of affective but also social, political, and economic crises emergent in the early 1980s — not only the burnout of labor but also the burnout of capital, of natural resources, of ideological legitimacy, and of global empire. When Ronald Reagan assumed the office of president in 1981, many people — and not just those on the political right — believed that his “vision” could seriously address these crises that had plagued the nation in the previous decade. Much has been written about Reagan’s unique ability to mobilize national fantasies through his self as pure sign, as pure affect. Reagan became a sort of trope, a synecdochic figure for a nation apt to divide the world into good and evil yet uninterested in distinguishing fact from fiction, television from reality. (See Rogin 1988; Rubenstein 2008; Massumi 2002). I argue that Reagan (qua Reaganomics) was an affective anchor for imagining “the economy” as a unified, cohesive system — one strictly demarcated from culture and politics, and operating with its own intransigent laws. To be sure, Reaganomics itself was hardly cohesive; rather, it was a loose set of policies and outlooks based partly in conservative politics, Chicago School monetarism, and other disparate pieces of economic theory. What is important to understand however is that Reaganomics functioned to congeal “the economy” as a discrete, tangible, knowable, and above all fixable entity within public imaginations.
Timothy Mitchell has shown how discourse of an autonomous economy is relatively new, one that emerged in the mid-20th century as a tool of global governance. For Mitchell, this new discourse of the economy facilitated a “re-imagination of the international order” in the wake of world war and decolonization, solidifying the United States’ geopolitical and economic hegemony. Through discourse of “the economy,” benevolent domination of the 3rd world would proliferate as a purely technical matter in policies and programs for market development. As Mitchell puts it, “the power of the economy as a discursive process lies exactly with fixing this effect of the real (economy) versus its representation” in economic models, statistics, plans and programs.[6] While Mitchell emphasizes how economic discourse became an instrument for state building abroad, I argue that this same discourse has become a key political, social, cultural and indeed affective reference point domestically since the early 1970s. In the United States, the early 1970s is oft-cited as a moment of crisis, a time when Fordist accumulation strategies proved no longer viable, and capitalist expansion shifted from the material to the financial. Discourse of “the economy” then re-emerges as a politicized (if overly simplified) drama at home, played out in a sort of national theatre where Ronald Reagan is the heroic protagonist in Reaganomics or Bill Clinton the foil by reminding us that “It’s the economy, stupid.”
If Reaganomics was a way of representing “the economy,” then burnout was the emotional situation that surfaced in the fraught space between that representation and the material reality it referenced. After all, Reagonomics was devised as the antidote to a burnt-out economy. This is all the more clear when we consider the explosion in labor burnout in the 1980s, and the response by burgeoning neoliberal policies. For example in August 1981 just months after taking office — and in the first enacted policy of Reaganomics, President Reagan fired striking air traffic controller workers which effectively disbanded the Professional Air Traffic Controllers Union (PATCO). As with teaching and nursing, air traffic control is a profession famously prone to worker burnout. In the case of PATCO, worker burnout becomes framed as an individual pathology rather than an outcome of the work’s psychological and physical tolls — dismissed for over a decade by the federal government.  The dissolution of PATCO was a turning-point for unions in general, and indeed there has been a marked decline in wages since.[7] I argue that the PATCO example underscores how discourse of “the economy” was a powerful tool for undermining labor and for obfuscating complex historical forces. In light of this, burnout signals the hazards of working, and of working more for less; it indexes a historical moment when “fixing the economy” enters national consciousness; most importantly perhaps, it suggests that we look for politics in the mundane pain and toil of everyday life.

John Andrews is visiting assistant professor of sociology at Vassar College. He is co-editor of The Unhappy Divorce of Sociology and Psychoanalysis (Palgrave, 2015) and is currently revising his monograph "The Economy is Everything: An Affective Genealogy of a Category," which examines the affective and aesthetic contours of “the economy” in the United States since the 1970s.