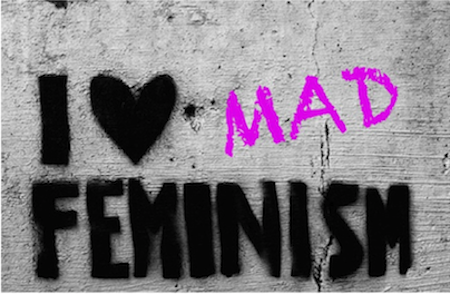 I admit it: I’m mad.[i] Try as I might, I cannot summon up the elegant inquisitiveness of Julia Rodas’s multi-layered meditation on what there might be to like about the DSM. I could, I suppose, adopt a similar strategy in relation to Complex Somatic Symptom Disorder, the psychiatric diagnosis most often applied to bellyachers like me. I might observe, for example, that the excessive complaining that the DSM flags as a sign of this condition is a central activity of the text itself. Can’t the DSM be read as a list of every single thing that annoys its framers about every single type of person they do not like? Such griping, I could even contend, is a good thing, since, as I have said, complaining is communicating. But no. When the DSM interpellates me—as “white middle class woman,” as “neurotic hypochondriac,” as non-adult, non-person who cannot suck it up and deal with pain like a good American citizen with a proper Protestant work ethic—it is a bully.

When I say I’m mad at cultural constructions of mental illness, I don’t mean that I’m monolithically “for” or “against” medicalization, the DSM, or any particular psychiatric diagnosis. I get mad when diagnoses are withheld from those who want them and when they are forced on those who don’t. For example, I share Julia Serano’s outrage at the DSM’s pathologization of so-called deviant sexualities and gender identities. Are the framers serious—in 2013—in still saying that the ways some people like to have sex, or choose to dress, or define their genders, constitute “paraphilias” or “paraphiliac disorders”? Have they not yet grasped that the emotional distress and interpersonal difficulties that they define as symptoms of these disorders result from social stigma—stigma they reinforce by labeling queers, crips, trans folks, and everyone whose bodies and minds fall outside the realm of the “phenotypically normal” as intrinsically disordered?

Kristina Gupta’s essay on asexuality makes me mad, too—and this time the person I’m mad at is me. In my chapter for Sex and Disability, the anthology I co-edited with Robert McRuer, I sometimes use the word “asexuality” in a way that increases the stigmatization of asexual people. As s. e. smith explains in a review of the volume, “‘asexuality’ refers to the individual absence of sexual attraction, not to the social desexualization of people deemed sexually unappealing.” The confusion between desexualization and asexuality, smith observes, “does a grave disservice to disabled asexuals, many of whom have been fighting for recognition in discussions about disability and sexuality.” In other words, while it is appropriate for disabled people to resist desexualization—the social assumption that, as a rule, people with disabilities are sexually undesirable and do not have sexual feelings—it is inappropriate (and ableist) to use language that reinforces the cultural belief that asexual is a bad thing to be. Why didn’t I see this? Now that I’ve read Gupta’s article, the answer is clear: I was so eager to establish that disabled people are sexual that the notion of asexual identity felt like an impediment to my aim. But why should how much sex one has, or how “hot” that sex is said to be, constitute a measure of one’s worth as a person, or of one’s value to disabled, queer, and crip communities? Gupta’s essay is far from irate; it provides a balanced analysis of the pros and cons of the psychiatric label Hypoactive Sexual Desire Disorder. But her exploration of these questions teaches me to recognize my own inadvertent participation in the social dismissal of asexual people, and to understand that this dismissal is absolutely not okay.

When I read Andrea Cooke’s compelling narration of her struggles with schizophrenia, I am angry again: this time, at feminist and queer scholars’ uses of mental illness as a metaphor for All That’s Wrong with the World. For example, in Epistemology of the Closet, Eve Kosofsky Sedgwick characterizes ideas she disagrees with as “bipolar,” “psychotic,” and “crazy” (43; 129). And in a recent New Yorker article by Susan Faludiabout the radical feminist Shulamith Firestone, schizophrenia serves as a metaphor for all that was (supposedly) wrong with the second wave women’s liberation movement. Firestone died last year, most likely as a result of complications from schizophrenia. In her article, Faludi seems to suggest that if second wave feminists had only been nicer to each other, Firestone might not have gotten ill. Claiming that schizophrenia is caused by “social isolation,” Faludi blames feminists’ infighting for perpetuating women’s “alienation from each other.” This model of mental illness as a failure of feminist sisterhood harkens back to 1950s theories about “schizophrenogenic mothers”; both woman-blaming approaches controvert a near consensus among psychiatrists about the etiology of schizophrenia: the illness is widely believed to be a hereditary disease of the brain, which occurs in approximately one percent of all populations, regardless of race, ethnicity, religion, class, or gender. Framing schizophrenia as a “‘bitter metaphor’ for the ‘cultural situation’ of women” (this is Faludi’s approving quote of Elaine Showalter) reinforces the already severe social stigma against people with this devastating illness; it creates the false impression that the disorder results from individual or political shortcomings.

Like Merri Lisa Johnson, I am frustrated by the “ablenormativity” of many feminist accounts of mental illness; I, too, long for a feminism that “will take mental illness seriously”: as complex and variable phenomenology, not metaphor or moral failing. Inspired by Johnson’s naming of the field Feminist Psychiatric Disability Studies, and in dialogue with her about the contours of this discipline, I have lately been dreaming of another critical conversation, which I refer to as Mad Feminism. The extent to which Mad Feminism and Feminist Psychiatric Disability Studies name two distinct (but overlapping and mutually animating) fields, or are simply two names for the same field, remains to be seen. One possible shade of difference between the two may have to do with their respective phenomenological orientations. If Feminist Psychiatric Disability Studies tends more toward cripistemologies[ii] and cultural representations of specific psychiatric disabilities (such as depression, BPD, and autism), Mad Feminism leans more toward subject positions at the margins of madness: of those people who might not bear any psychiatric diagnosis label but are nonetheless regarded by the dominant culture as crazy: people of color seen as emotionally erratic, fat people thought to be irrational overeaters, or folks with chronic illness suspected of hypochondria and malingering.

Intersectional attention to race, disability, gender, sexuality, and body size are of crucial importance to both Feminist Psychiatric Disability Studies and Mad Feminism. From “drapetomania” (a spurious nineteenth-century psychiatric diagnosis that was blamed for slaves’ desire to run away) to contemporary constructions of schizophrenia as a disease of violent black men, “Muslim terrorists” as mentally “sick,” Jewish people as “neurotic,” and depression and chronic fatigue syndrome as “white illnesses” (and denials of validation and appropriate medical treatment to people of color who suffer from the latter conditions), the politics of mental illness are inseparable from race, ethnicity, and religion.

The diagnoses “overweight” and “obese,” which are applied disproportionately to Latino/a and African American people, also mark subjects as mad. Ignoring evidence that fatness is a benign form of human variation, unattributable to any particular personality type or pattern of eating, most Americans assume that fat people “overeat” and that they do so because of “psychological problems.” Fat activists fight this stigma by pointing out that health can occur at any size and emphasizing that fat folks have never been shown to eat less healthfully than anyone else. Some fat activists go further, lambasting the “healthism” that undergirds anti-fat prejudice and pointing out that even if fat people did eat candy bars in front of the television all day, they would still deserve social equality and respect.

This refusal of healthism—a category I would explicitly expand to include mental healthism—is a defining feature of Mad Feminism. Often, those of us labeled “crazy” struggle to shed the stigma of mental illness: people with poorly understood chronic illnesses insist that our disabilities are not “in our heads,” and asexuals and trans folks emphasize that they are “healthy and happy.” Undoubtedly, such assertions are necessary and transformative. But there may also be much to gain from a stigmaphilic acceptance of the label “mad.” In the interests of repudiating mental healthism, those of us who are oppressed by the psychiatric profession might—regardless of whether or not we identify with a psychiatric disability label—subversively reclaim “madness,” taking on the multiple affective and political connotations of this term. Mad Feminism invites all subjects who are marked as mad to stand (or sit, lie, or roll) in solidarity and in collective anger at the ways the stigma of mental illness is used to discount us: to lock us up, deny us medical care, laugh at our suffering, punish us while perpetrators of violence against us go free, call us liars, roll eyes and shake heads at the “crazy” things we say. Let’s admit it: we are mad.

[i] This essay is about being mad, but the conditions of its possibility make me glad. Warmest thanks to Merri Lisa Johnson, who has changed my life by: coming up with the idea of Feminist Psychiatric Disability Studies and recognizing me as a participant in this nascent field; initiating DSM-CRIP and inviting me coedit it with her; and enthusiastically cheering on my efforts throughout this process. Lisa’s extraordinarily generous collaborative insight—the basis, perhaps, of a new field in the making—has made this co-editorship a superlatively pleasurable undertaking. Without the love and kind support of my wife, Jane Arlene Herman, this collection could not have been completed. Jane was involved at every step of the way, and her critical and editorial acumen have greatly enhanced the dossier. Deep gratitude also goes to my inimitably wonderful niece and magnificent typing assistant, Jennifer Nicole Herman.

[ii] “Cripistemologies” refers in part to crip ways of knowing. The term will be more fully elaborated in a forthcoming special issue of the Journal of Literary & Cultural Disability Studies, Cripistemologies, edited by Johnson and Robert McRuer.