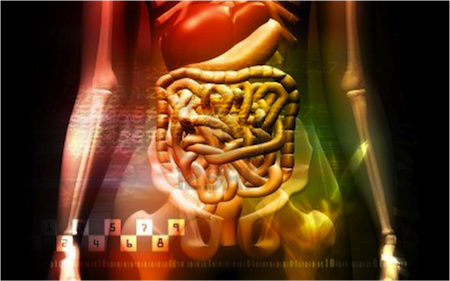 It would have been nice, before I sat down to start writing this essay, to have had some breakfast first: bacon and eggs, sourdough bread on the side, and a slice of fresh tomato. But once again, it appears that I will not be eating—or at least will not be eating very much—today. It’s been one of those months: I’m having another exacerbation of my chronic digestive problems. What happens when I eat is, the food just sits there. My abdomen, which is always distended to pregnancy-like proportions, swells even larger after meals, making me look, and feel, as if I’d swallowed a beach ball. Instead of the gurgling and churning that would tell me my GI tract is industriously working, processing food from mouth to stomach to blood cells to anus and beyond, there is silence. I hate this: I’m starving, but I can’t eat.

I’ve never had what I call normal digestive functioning, but my problems have become much worse in the past six years. After visiting over a dozen doctors and submitting to numerous invasive and disgusting tests, I’ve learned that my stomach produces virtually no acid and that several parasites and “unfriendly” bacteria have made my gut into their home.

“What’s the treatment for that?” everyone wants to know. “Have you tried this?  Have you tried that?” Yes: I have tried every single thing that might possibly alleviate this problem. I have fasted, juiced, and done “colonics” (don’t try it). I have taken herbs, digestive enzymes, supplementary HCl, antibiotics, antiparasitics, and every kind of probiotic in the world. I have tried vegan, vegetarian, raw foods, low-fat, high fat, no carb, low carb, specific carbohydrate, GAPS, anti-candida, and every other imaginable dietary regimen. I have tried bodywork, enemas, visualization, meditation, special water, special minerals, and monthly “liver flushes.”  Yes, I have been tested for food allergies; yes, I have done the elimination diet. And no, none of this has worked.

And so I bellyache. When my stomach problems worsen, all my muscles and joints ache, and my head feels heavy and waterlogged. Sometimes, all I can do is take my sore, exhausted body to bed and wait for this episode to pass. Anyone living with chronic pain or illness will know what I’m talking about. Whether it’s gastrointestinal hell, the flu-like horror of chronic fatigue syndrome, the unrelenting pain of fibromyalgia, or the torture of migraines, a terrible grief washes over us when symptoms worsen and won’t resolve, when we’re reminded of everything we’re missing in life, when we worry about what will happen if we get worse.

Such sadness often runs along multiple fault lines; many of us have numerous inter-related ailments. In addition to my digestive problems, I also have environmental illness, a repetitive strain injury, and chronic back pain. Some of my doctors have said that if my digestive tract could be healed, my other medical problems might improve. Each year, I tell myself I am at last on the path toward this goal. But there are also times, like this month, when I fear that, despite all my efforts and struggle, my digestive problems might not go away.

The DSM has a name for my problem, and a remedy. The name is Complex Somatic Symptom Disorder, and the remedy is essentially: “Quit your bellyaching.” In earlier editions of the DSM, this psychiatric diagnosis was called “Somatoform Disorder,” “somatoform” meaning, “has the form of a physical disorder but is actually all in your head.” According to the DSM, the hallmark of Complex Somatic Symptom Disorder is complaining: “the patient’s difficulty in tolerating physical discomfort and in coping adaptively with bodily symptoms” and “excessive concern or preoccupation with symptoms and illness.” But what makes the DSM framers so sure that our physical symptoms have no biological causes? The authors of the manual admit that a large percentage of people diagnosed with “somatoform” disorders later turn out have documentable physical illnesses, such as multiple sclerosis. But this does not faze them at all: still they confidently assert that so-called somatizers employ bodily symptoms as “culturally shaped ‘idioms of distress,’” to “express concerns about a broad range of personal and social problems.”

Perhaps what they mean is that bellyachers are killjoys. Sara Ahmed has famously suggested that feminists, critical race theorists, and queer scholars should “take [the] figure of the feminist killjoy seriously” (65). Feminists, she acknowledges, “do kill joy in a certain sense: they disturb the very fantasy that happiness can be found in certain places” (66). Crip killjoys also disturb fantasies, most notably the belief that adopting a “healthy lifestyle” will protect us from suffering, disability, and illness.[i] Bellyachers also kill the hope of those who want to help us. When we first visit a new doctor, he or she often promises, “We are going to get to the bottom of this.” But as treatment after treatment fails, they turn to blame. “You should be better by now,” a doctor recently told a friend who has digestive problems similar to my own. “What kinds of thoughts have you been having?”

“You should say you’ve been having sexual thoughts—about him!” my spouse wryly remarked.  “That’s why you’re still nauseated.”

If my wife’s crip quip has an edge, it’s because chronically ill people are tired of being belittled just because we are sick and can’t seem to get better. And who says bellyaching has no value? I believe it saved my life last year. I’d spent an entire morning and afternoon lying in the fetal position holding my belly and moaning. I’d been through this many times before, and I assumed I was just having another bout of digestive distress. If my spouse hadn’t intervened and taken me to the hospital—and if I hadn’t yelled, “A ten!” when the ER nurse asked me to rate my pain—who knows if I would have received the laproscopic appendectomy that kept me alive?

Killjoys, Ahmed notes, are remiss in performing what she calls “the happiness duty” (7). A related cultural mandate, which I propose to call “the health duty” (akin to Robert McRuer’s notion of “compulsory ablebodiedness”) is flouted by bellyachers. In defiance of the twin disciplinary imperatives, “Be happy” and “Don’t complain about your health problems,” the crip killjoy insists: “I will not quit my belly aching until my belly quits aching.” After all, complaining—such as the incessant moaning that brought me, happily, to a life-saving lap appy—is communicating.

[i] My thanks to Johnson for the term “crip killjoy.”