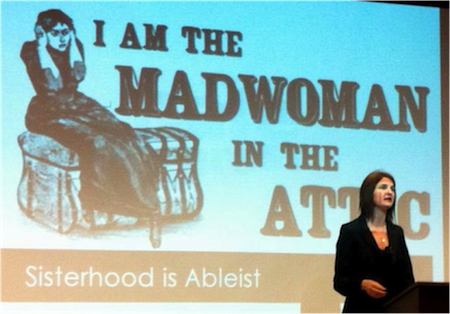 The DSM5 is finally finished.[i] As with all momentous occasions, most people are disappointed. Feminist critics cast the DSM in the role of your worst ex-boyfriend, the one who won’t stop following you around and whispering mean things in your ear until you scream or act crazy in public. He hides in the bushes while the butterfly nets come down on your head. I am not crazy, say the anti-DSM feminists. You are making me crazy. They find good company with the queer activists who protested the manual’s representations of lesbian, gay, bisexual, and trans identities as diseased, and with the psychiatric survivors who stood on the doorstep of the APA conference last spring, holding up signs with their diagnoses printed on them, then ripping them apart and speaking new self-fashioned words into the space between their hands. Then there are the whistleblowers, psychiatrists telling tales out of school about what really goes on in the making and remaking of the DSM: theorists out of touch with clinical practice, specialists expanding the purview of their pet areas, the revision speeding too far ahead of the science that would back it up, and skyrocketing profits predicted for Big Pharma. I have watched these theatrical condemnations closely over the past year, but no matter how I squint my eyes or tilt my head, I cannot find my experience in the DSM debates. It is not my drama.

And believe me, I know my drama when I see it. For many specialists, drama is synonymous with my diagnosis, borderline personality disorder, or BPD, which appears in Cluster B of the personality disorders in the Diagnostic and Statistical Manual IV-TR, along with the other “dramatic, emotional, or erratic” personality disorders. I have claimed this psychiatric label since December 2005, the month I turned thirty-three. One prominent school of thought defines BPD as an attachment disorder caused by emotional abuse and neglect in childhood. People with BPD often turn up in therapy because they experience romantic conflict as an all-consuming catastrophe. That’s how I received the diagnosis. I’d spent the summer surviving on peppermint Luna bars and Lady Grey, sobbing into a bottomless tumbler of Scotch over a woman who would not leave her partner for me. If my reaction seems extreme to you, well, I thought so too. And I cried as much over my confusing emotions as I did over the disabling crush, until finally, I threw myself at the mercy of a therapist who helped me match this picture with the diagnostic criteria for BPD. I clapped and cheered and stomped my feet, welcoming the epiphany of my diagnosis with joy. (Okay, maybe not on the first day. But soon after.)

In 2010, I published Girl in Need of a Tourniquet: Memoir of a Borderline Personality. By claiming the label “borderline” in the title, I deliberately risked the penalty of stigma, joining the ranks of other queer, feminist, and crip artists who use vulnerability to challenge the application of stigma to unruly or rejected bodies.[ii] Not unlike Mary Duffy, who presents her naked armless body on stage as a living Venus de Milo, an action described by Rosemarie Garland-Thomson as “rebuking the aggregate ‘you’ who would cast her as pathological specimen, freak of nature, quintessential lack,” I presented the details of my psychological breakdown not as embarrassed confession but as situated critique. Instead of ripping the label up and throwing it away, the memoir performs a label c/rip: reassigning meaning to BPD by turning with tenderness toward the strange spasticity of emotion dysregulation, much as Eli Clare does with cerebral palsy, or the late Cheryl Marie Wade with her anomalous hands. Simultaneously invoking and troubling the category of BPD—or disidentifying with it, in José Esteban Muñoz’s coinage—I never felt subsumed or disqualified by this psychiatric label.[iii]

Yet, when I presented myself under the sign of BPD, giving talks based on the book at universities, some feminist audience members (my natural allies, I’d assumed) whispered mean things in my ear (But you know that’s not real, right?) until I wanted to scream and act crazy in public. Part of what many feminists object to about the label of BPD is that people mobilize it to stigmatize, control, and undermine the credibility of women who do not actually have this disorder (consider the recent spate of sexual assault victims discharged from the military on the basis of trumped up BPD diagnoses). And as a diagnosis that pathologizes survivors of childhood abuse and medicalizes women’s justified rage, the label fits an all too familiar paradigm of medical history that casts pregnancy and menstrual periods as disorders. Don’t call us sick when we are really healthy, say the anti-medicalization feminists. Damn right! But . . . what about those who are sick?

Enter feminist psychiatric disability studies, or the “What about the real madwomen in the attic?” strand of feminist disability studies, starting with Elizabeth Donaldson’s idea that madness as a metaphor of female rebellion obscures the lived experience of mental illness. In a similar vein, Andrea Nicki further challenges ablenormative feminist scholars to take mental illness seriously, asking, What does a gal have to do around here “to be considered genuinely mentally ill”? Likewise, in her reading of Meri Nana-Ama Danquah’s Willow Weep for Me: A Black Woman’s Journey through Depression, Anna Mollow observes that some Black women wish they had cultural permission to claim this diagnosis, a label invalidated, as Danquah points out, by the stereotype of the Strong Black Woman. And in her rhetorical analysis of mental illness in academia, Margaret Price asks, “Is it possible to listen to the mad subject?” The emergent field of feminist psychiatric disability studies provides a validating scholarly frame for women who wish to claim a psychiatric disability label, whether wholeheartedly or ambivalently, alongside the perspectives of psychiatric survivors who decry the medical abuses of forced institutionalization, coerced medication, and wrongful diagnosis.

DSM-CRIP brings together a group of feminist, queer, trans, crip, and disabled scholars to make fresh contributions to this new field. The essays unfold across a range of crip affects—cantankerous (Mollow), outraged (Serano), reconciled (Gupta), doubtful (Cooke), and playful (Rodas)—departing, in most cases, from my own diagnostic exuberance.[iv] The collection retains the audacity of the Label Rip protests but resists the lure of binary analysis (Is the DSM good or bad? Are we “for” particular diagnoses or “against” them?), providing instead what has been missing from the DSM5 debate so far: close attention to the wild variability of feminist struggles with psychiatric labels.[v] This is the drama that really matters to me.

[i] This essay is also finally finished. It could not have been done without Anna Mollow’s assistance. For her knowledgeable input, kindly supportive guidance, incisive wordsmithing, and unwavering queercrip feminist generosity of time and spirit, I am deeply grateful.

[ii] I’m thinking here of Nao Bustamente, whom Jose Esteban Muñoz calls a “vulnerability artist,” and of feminist autobiographical manifestos by Dorothy Allison, Nancy Mairs, and Audre Lorde, all of whom risked self-revelation in the service of broader social critiques.

[iii] The only form of disidentification that has been discussed in relation to psychiatric labels to date has been the much different sense in which sociologist Jenna Howard uses the term to describe “people who formerly identified with emotional disorder labels and chose to discard them,” a group she calls “delabelers.”

[iv] The phrase, “diagnostic exuberance,” appears in the famed psychiatrist Allen Frances’s condemnation of the DSM5. I am upcycling it here as a crip theory equivalent to Sara Warner’s queer theory term, “acts of gaiety.”

[v] It so happens that I am teaching Jack Halberstam’s article, “Transgender Butch,” as I write this essay, and I poached the phrase “wild variability” from his treatment of masculinities in the overlapping space of butch and ftm gender presentations.