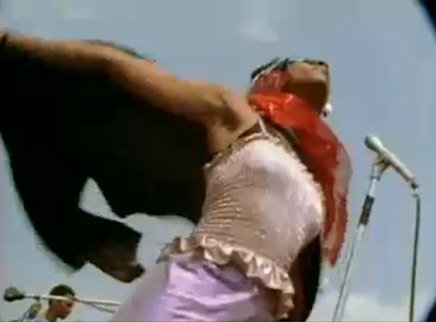 I have a relative who, after spending his twenties as a member of the Black Panther Party, fifteen years in hiding and some time in jail, then spent several years in nightly trances, channeling prophecy. His audio visions were primarily direct messages from a Native North American chief who lived 150 years ago. My relative renounced his African American identity, calling himself instead a Native American of African descent, and took a native name. The chief warned my relative of the final days before the apocalypse, and of the subsequent transformation of human life. As the result of racism, human greed and folly, the world as we know it, the chief told him, will be destroyed through economic disaster, fire, flood and earthquakes, but this cleansing redemption will be followed by a new age. Earth will be abandoned, as humans colonize other worlds. Capitalism will disappear. Computers will take over the role of the state, levying punishment and distributing resources. All vocal speech will disappear, replaced by extrasensory forms of communication. Scientists will take over the role of childcare and reproduction. Without the need for hierarchical power relations and systems of oppression, races and genders will cease to be relevant and disappear. Humans, the chief told my relative, will be visited by extraterrestrials in their sleep. These aliens have the ability to alter human DNA, and so will transform the human species. Physically and mentally enhanced, humans will evolve into a new species, thereby ushering in a new era of enlightenment.
“What will you do when the apocalypse comes?” he asked me urgently. My first reaction was to laugh derisively. But a friend made me think twice. “Who knows, maybe he’s right,” she said. Then came the Tsunami that devastated South Asia in 2004. And the levees that breached during Hurricane Katrina in 2005. Who’s to say what’s real?
Narratives of space travel and species evolution are often told in what appear to be fits of madness. For an afro futurist analysis, these narratives form a key mythology in black cultural philosophies. After all, black people’s existence is mythological in the first place, as Sun Ra reminds us. We’re not real. So what does this current plane of reality, also known as a mutually agreed upon fiction, mean to us anyway? And who mutually agreed upon it? Since we didn’t seem to be asked, it would make perfect sense that we would be more in touch with/at home in other realities, other worlds which may be less violent and alienating. We might very well have extrasensory access to the spiritual afterlife, like my relative, or be open to other forms of existence, other forms of energetics, sonic and haptic, rather than visual or discursive. Even to inhabiting other bodies and physical manifestations.
Though I could call my relative’s madness afro futurist, I would do so without his permission. What his visions and some science fiction do is to theoretically estrange the notion of race, to think about what it would look like if the paradigm shifted, if power was no longer ordered through specious notions of racial, or gendered and sexual, difference. Science fiction is a literature of possibility, that sometimes contains recognizable figurations of such categories, sometimes features them reinscribed, or no longer carrying the same valence, and sometimes is free of familiar concepts of them entirely. Sometimes, as in the work of Octavia Butler, what remains are relations of power drawn along biological lines; ideas of indigeneity, mixing of species and alien DNA.
I enjoy my own fits of madness, which draws me empathetically to other ‘mad’ women, like June Tyson, the voice of Sun Ra’s Arkestra. June Tyson
“It’s after the end of the world, don’t you know by now?” she asks. Or like Poly Styrene, who saw The Day the World Turned Dayglo.
At eighteen Poly saw a vibrating pink UFO that electrified her body and she was subsequently committed to a mental hospital. Or like Janelle Monae, creator of the archandroid savior Cindi Mayweather.
In the song Tightrope Monae sings about madness and the salvific quality of dance in an old mental institution called the Palace of the Dogs. Janelle Monae, Palace of the Dogs
In my own madness, I wonder what may be possible in alter universes, what may lie “on the other side of time,” in other dimensions, and how far we can go in imagining life on other terms. What are the ways we already practice these lives? What are the ways we can question or stretch what we consider human, the ways we are released and/or kept bound by raciologies and the relational dynamics out of which they germinate? Futures, alternate worlds, spell glimpses, or entire texts, in which we have a different assemblage of bodies altogether.
Even traveling to other dimensions, I don’t think we should leave the physical world behind. Bodies are the crucial ground for both dystopian and potentially liberatory projections, and some speculative visions bring the human into question in radical ways. Such narratives attempt to break with common sense notions of life and self, formed in the rubric of hierarchical oppressions. Ernst Bloch says, “in the utopian there is as much about reconstruction of the organism as much as there is….of the state.” How are bodies inhabited and modified in these visions, and what range of potentialities are there? How can we think about life without supporting a universalist sense of being, which is to obscure recognition of the differing forms of relationship to life?
What happens when we disaggregate the idea of individual identity from the concept of life itself? What if the concept of the self was fully dismantled? “A life has quite different features than those associated with the self — the consciousness, memory, and personal identity,” writes Deleuze. “It unfolds according to another logic: a logic of impersonal individuation rather than personal individualization…it is always indefinite…in contrast to the self, a life is ‘impersonal and yet singular,’ and so requires a ‘wilder’ sort of empiricism–a transcendental empiricism.”[1] Taking this call for a wilder kind of empiricism may offer us a way to think outside of the hierarchical binary of zoe and bios, and conceive of a kind of life based in statelessness, collectivity, perception and sensation.
Sensation is underrated. To feel is to be sentient, alive, to inhabit a body. Samuel Delany, in his novel Nova, imagines an instrument of “sensor projection,” that stimulates not just the audio nerve but all of the senses. This instrument is called the syrynx. When it was played “colors sluiced the air with fugal patterns as a shape subsumed the breeze and fell, to form further on, a brighter emerald, a duller amethyst. Odors flushed the wind with vinegar, snow, ocean, ginger, poppies, rum….Electric arpeggios of a neo-ragga rilled.”[2] Samuel R. Delany
The syrynx seems to me a glorious instrument. Music, resonance, sounds we can’t hear (as Steve Goodman argues in Sonic Warfare) combined perhaps with articulations of the body (dancing is what keeps her sane, says Janelle Monae) suggests other planes, portals to alternate worlds.
I appreciate the ways my relative’s trances, as well as some science fiction, engages in a “wilder sort of empiricism.” I don’t think these engagements need to be understood in the framework of the posthuman condition. Such chronological linearity implied by ‘post’ does not apply to beings who already exist in alternate time/space frames. What these imaginings often suggest instead is that such subjects, while excluded from the human, have an expanded capacity for life, in fact have always had access to worlds freed of regulatory terms of humanness. Alienated, alien non-subjects have particular access to not just go to, but to define other states of beingness.
Top image: June Tyson, still from A Joyful Noise (1980)