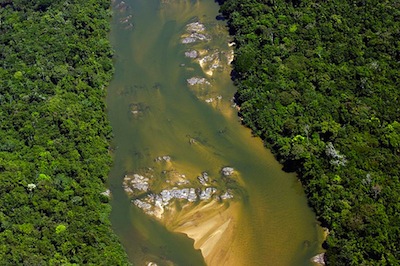 When it comes to dealing with misfortune and injustice, the most effective tool to use if we want to make sure that troubles will persist without relief is a simple sentence: That’s water under the bridge. No use crying over spilled milk. The past is over and done with. The goose is cooked. What’s done is done.
Whenever people have their attention called to injuries that occurred in the past, it is almost certain that someone will pipe up with a demand that everyone cut short the desire to improve the world and, instead, to defer to the water-under-the-bridge school of history.[1]Patricia Nelson Limerick, foreword to Walter R. Echo-Hawk, In the Courts of the Conqueror.

There are is perhaps no better example of the water-under-the-bridge school of thought in the settler-colonial imagination, than Orson Scott Card’s Pastwatch: The Redemption of Christopher Columbus. In Pastwatch, Card tells of a global society that finds itself able to go back in time and reboot history. If they were to be sufficiently committed and sufficiently clever, they could retroactively prevent the twin evils of slavery and colonialism. There is one major catch: in doing so, they would write themselves, and their own futures, out of existence.
Card’s society, a near-utopia fatally poisoned by the aftereffects of colonialism, accepts the bargain. They decide that it is better to have never lived, for their children to have never lived, than to allow that original suffering to have happened.
As settler-colonial re-imaginings of Columbus and his legacy go, Pastwatch is one of the better ones. Card does not deny the horror of Columbus’s actions nor of the history that followed. If Card grieves for a mythic folk-hero of his childhood and thus feels a need to redeem Columbus, then Card has more sense than to blame Indians for Columbus’s actions (unlike some relatives of mine), and Card likewise attempts to strike a meaningful balance between Columbus having the capacity to make moral decisions and being a product of his society. Some aspects of the book make me raise an eyebrow, but there is nothing here that prompts me to throw it against the wall.
And yet.
Pastwatch is premised upon having to choose between one’s own continued existence and correcting the original wrongs. No other choices are available.
That seems… extreme.
If that opposition appeared in only a single book, I would not be so disturbed, but unfortunately, the trend is widespread. When I dig into the library bins to see what books teachers are giving to kids these days to help them learn about American Indians, I find book after book re-imagining that moment of first contact between indigenous people and settlers. They are nearly all written by non-Native authors, and curiously, these non-Native authors write from an allegedly indigenous point of view. Jane Yolen, Encounter. David Wisniewski, The Wave of the Sea-Wolf. John Marsden, The Rabbits. There is a formula to these books: “‘our’ life was good but then white people came and ruined everything, and now ‘our’ lives are horrible, possibly forever.” Putting aside the question of why genuinely indigenous points of view are being passed over for faux-indigenous points of view, why is it that so many white authors feel the need to re-cast themselves as indigenous when they imagine this history? Is being in possession of settler privilege so terrible, so completely bankrupt of the possibility of moral action?
(What do their children make of that, I wonder? What are they supposed to grow up to do, short of going back in time and doing it over?)
Nor is it just the children’s books, the historicals, the horribly-ever-afters. In James Cameron’s Avatar, Jake Sully goes N’avi to save Pandora from future colonialists, just as Kevin Costner’s Lieutenant Dunbar had gone Lakota nineteen years before. Again, a fantasy of becoming indigenous. Again, a fantasy of redoing the beginnings. Talking about Avatar, James Cameron said:

This was a driving force for me in the writing of Avatar — I couldn’t help but think that if [the Lakota Sioux] had had a time-window and they could see the future… and they could see their kids committing suicide at the highest suicide rates in the nation… because they were hopeless and they were a dead-end society — which is what is happening now — they would have fought a lot harder.[2]http://www.guardian.co.uk/world/2010/apr/18/avatar-james-cameron-brazil-dam

…because the only thing to be done about those hopeless, dead-end Lakota societies (and why is a non-Lakota making that determination?) is to go back to the past and do it over again.
It is peculiar that Cameron would suggest that the Lakota, of all people, needed more heroic stories. The Lakota are the people of Crazy Horse, Sitting Bull, Red Cloud, Zitkala-Sa, Leonard Peltier, John Trudell, and Mary Crow Dog: we do not need a Jake Scully, nor a James Cameron, to inspire us. I could not express it better than DeepaD, who has observed:

Unfortunately, the settler-colonial obsession with beginnings, do-overs, and what-I-would-have-dones often short-circuits action. DeepaD summarizes the various ways these fantasies can serve the status quo; I wish to highlight two specific issues.
First, the framing of these narratives propagates the myth that these are not contemporary issues. As much as Cameron’s remarks about the Lakota irritate me, I will give him this: he made those remarks in defense of the indigenous peoples who have been fighting against the Xingu river dam, a battle that they even now may be losing. A photo has been circulating recently of Chief Raoni crying in response to Brazilian approval for the dam’s construction. I will not link the photo — Raoni is attempting to shield his face, and presumably his grief, from the cameras — but I cannot help but contrast the iconic staged tear of a faux-Indian transported from the unreachable past with Chief Raoni’s very real and contemporary anguish.
Secondly, this obsession with would-have-dones obscures the possibility of could-yet-do. Over and again during discussions of indigenous issues, I hear the question, “What would you have us do? Give all the land back?” There is an odd, belligerent helplessness in that question, an implication that this one action, and thus all action, is impossible. Each time I am asked this, I wonder: is that truly the only possibility that you can imagine, un-flowing all the water from under the bridge?
Perhaps it is.
Continuing the quote with which I introduced this article, Patricia Nelson Limerick offers a remedy for the water-under-the-bridge school of history:

There is a simple corrective to this widespread pattern of defeatism. The corrective is as simple as pointing out that the river of time has not stopped flowing. The river continues to flow toward the bridge and under it, and every moment presents a fresh opportunity to find a fresh, and better, way of living in that flow of time.

The river of time has not stopped flowing.
O ye who speculate, I ask this of you: as you stand on that bridge, time and possibilities flowing under your feet, drag your gaze away from the would-have-dones long since drained to the ocean, and look down. Tell us of the fresh possibilities flowing beneath your feet. Or, if this stretch of the river seems dammed and polluted and therefore without possibility, then look upstream to where the possibilities are still free-flowing, and tell us of the things we could yet do. Tell us of the rivers we could have, if we had but the commitment and cleverness to allow them to be.
Those are the stories I crave. As long as time is still flowing, I have no need for defeatism. But I would wish to know that you, the people who have inherited this history with me, the people who would imagine new futures for us all — I would know that you believe that time is still flowing, too.
Top image: Xingu River, courtesy of Flickr user Leonardo F. Freitas