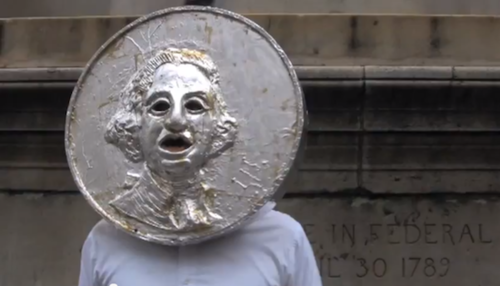 Since April Fools Day 2009 I have been spending Federal Reserve Notes stamped on one side with “Free Money” and the other “Slave of Wall Street.”

The Aaron Burr Society is dedicated to exposing the myths of Free Markets and Free Trade while challenging the integrity of Wall Street and their corporate cronies. The Society is an absurdist, conceptual artwork operating in the public sphere, building on the revolutionary traditions of the Early Modernists, Situationalist, and Fluxus movements. Though absurdist in nature, we take great pride in the accuracy of the information that we present to The People. Our goal is a progressive, sustainable re-imagining of the American Dream to be achieved by promoting a renaissance of the Enlightenment: the secular humanist principles of the American and French Revolutions–the first revolutions for universal human rights.

Today’s Collateralized Debt Obligations and government bailouts have their roots in the founding of the American Republic. Speculation on Revolutionary War Bond followed by Treasury Security Alexander Hamilton’s two-tiered economic and tax programs were the cause of at least five armed rebellions against the American government. Hamilton’s assumption of state debts by the national government and the creation of the National Bank were part of the economic program that caused Secretary Thomas Jefferson to resign stating that Hamilton was creating an aristocracy of Wall Street speculators. Later Jefferson run for president with Aaron Burr as his vice president on a platform based of economic reform and social justice.

The Free Money Movement section of the website addresses these issues.

The video is part of a series titled Summer of Change done in collaboration with Noah Fischer. The distribution of the Washington Quarter addresses the financial speculation that lead to the rebellions mention above. Of the five rebellions previously mention, the Whiskey Rebellion was the largest; it was referendum on the Constitution that created a government ruled by a minority of white males who owned property. Bond speculation and the assumption of the state debts by the national government resulted in foreclosures that left many Americans, including veterans, without property and the right to vote.