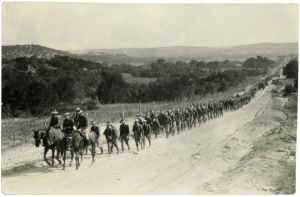 In the nineteen-teens, Concepcion García, a Mexican national, lived in Texas to attend school. In April 1919 she became ill, and attempted to return home. That same month Lt. Gulley of the U.S. Cavalry patrolled the U.S.-Mexico border.  While crossing the river back to Mexico on a raft, Concepcion, her mother Maria, and her aunt found themselves under fire.  Her father Teodoro looked on from the Mexican bank as Lt. Gulley shot and killed his daughter.[1]Teodoro García and M.A. García (United Mexican States) v. United States of America (1926).
That same month a court-martial dismissed Lt. Gulley from military service for firing at an unarmed group.  However, on the advice of the secretary of war, the US President reversed the findings.  This action restored the lieutenant to active military service five months later.[2]Under the jurisprudence of the commission American citizens filed a nearly three thousand claims against Mexico and Mexican citizens filed almost 900 against the United States.
Unsatisfied with U.S. military procedures, Concepcion’s parents filed a claim through the U.S.-Mexico General Claims Commission of 1923.  They charged the United States with a denial of justice, a violation of the international standards concerning soldiers taking human life, direct responsibility in the death of their daughter, and failure to punish.[3]J. G. de Beus. The Jurisprudence of the General Claims Commission United States and Mexico: Under the Convention of September 8, 1923. (The Hague: Martinus Nijhoff, 1938) 1-10. The Commissioner … Continue reading
On December 3, 1926 the commission found that according to military bulletins, “firing on unarmed persons supposed to be engaged in smuggling or crossing the river at unauthorized places, is not authorized,” and that the shooting of the unarmed Concepcion García constituted a punishable crime.  Moreover, the commission found it the duty of municipal authorities and of international tribunals “to obviate any reckless use of firearms.”  Accordingly the commission obligated the US Government to pay $2,000, in behalf of Concepcion’s parents.[4]For image used: “Convoy of Foot Soldiers,” Steve and May Bennett Collection, Archives of the Big Bend, Bryan Wildenthal Memorial Library, Sul Ross State University, Alpine, Texas.
In other words, the United States accrued a $2,000 debt for the murder of Concepcion García by a U.S. soldier.
The commission’s attempts to penalize national governments held liable for murdering foreign citizens by charging them to pay an indemnity exposes judicial failures to accurately assess human loss and to change military and law enforcement practices.  Examining the claims commission shows, first, that families that survived violent crimes actively sought justice for their deceased family members, second, that international courts employment of national debt did not represent an act of justice served.  Instead, an investigation into this claim shows that the General Claims Commission functioned to resolve international turmoil but failed to resolve the loss experienced by surviving family members.  This short essay first gives a short background on the commission within the context of violent turmoil on the U.S.-Mexico border in the early twentieth century.  Next, this piece outlines the shortcomings of the commissioner’s calculation of indemnities for claimants.  Finally, the writing concludes by situating the García case within a long and continued history of violence on the Rio Grande River.
U.S.-Mexico General Claims Commission of 1923
The start of the Mexican Revolution initiated widespread political instability in Mexico that lead to a calamitous rise in claims filed through the U.S.-Mexico General Claims Convention of 1923.”
[5]For more on movement in the U.S.-Mexico border region during this period see: Montejano, Young, Stern.
This committee aimed to amicably settle claims filed by citizens of each country against the other.[6]Teodoro García and M.A. García (United Mexican States) v. United States of America (1926) 130, quoting Annual Report pp 16-17, (1924) of the General Commissioner General of Immigration of the … Continue reading
While the majority of the cases dealt with loss of property, thirty-two claims charged nations with denial of justice, wrongful death, unnecessary use of arms, or direct responsibility in the death of their relative. Thus, the en bloc settlement officially closed the door for families like the survivors of the Porvenir Massacre still waiting to have their cases heard. Rather than signal a resolution for the families of all victims, the commission merely succeeded in calming diplomatic tensions arising from outstanding claims.  This resolution further increased Mexico’s financial debt to the United States and heightened the national disparities in power relations between the two nations.

Conclusion
The García case shows that although governments accrued national debts, these fines did not resolve or correct state-sanctioned violence. The commission did not fully considering the emotional trauma experienced by families nor did it prosecute crimes. Paradoxically, national debts specified by the commission helped alleviate national governments of responsibility to individual claimants by tallying all indemnities into a total sum to be negotiated.  Fining a nation for the murder of innocent victims did not resolve state-sanctioned violence.  Instead, this research reveals national governments as both the convicted and the beneficiaries of state sponsored violence.
The U.S.-Mexico Claims Commission of 1923 functioned to settle international claims that caused diplomatic tensions for the two North American nations.  However, individual cases in which the commission found national governments liable for loss of life can inductively illuminate debates about the long-lasting effects of the construction and militarization of the U.S.-Mexico border.  This research helps to recover these cases from international archives and to introduce a long history of survivors who resisted military and municipal officials’ reckless use of firearms in this region. Although decisions by the commission have garnered little attention from legal historians, I agree with Chakravarti, who claims that judicial proceedings and victim testimonies have the potential for reconciliation and social transformation through public education.  In this case, further study of this historical period and the commission’s findings has the ability to illuminate present day immigration debates about the current state in which loss of life on the U.S. Mexico border is a regular occurrence.
In December 2006 Francisco Javier Dominguez-Rivera, a twenty-two year old Mexican national traveled back from his factory job in New York City to visit his family in Morelos, Mexico for Christmas.  In January 2007 he planned to return to New York with his two brothers, and one of their girlfriends.  During their travel across the U.S.-Mexico border on January 12, just 100 yards north of the border, Border Patrol officer Nicholas Corbett approached the group and shot and killed Dominguez-Rivera. Corbett became the first agent tried for murder since 1994.  In federal court in Tucson, AZ prosecution charged Corbett with second-degree murder, manslaughter, and negligent homicide, but twice the proceedings ended in mistrials leaving prosecution not to seek a third trial. U.S. courts in Tucson, AZ continue a long history of judicial proceedings that fail to prosecute state agents for negligent homicide.  In an interview published in The Guardian in 2008, the son’s father Renato Domínguez explained that his family intended to seek an indemnity for the death of his son.[17] The earlier failures of the U.S.-Mexico General Claims Commission of 1923 raise questions of how judicial proceedings will grapple with the impossible task of quantifying human life and assessing personal damage.  However, until national governments decide to privilege human life above prohibitive laws, the loss of life on the U.S-Mexico border will continue to rise and the lasting impact will prove to be unquantifiable.