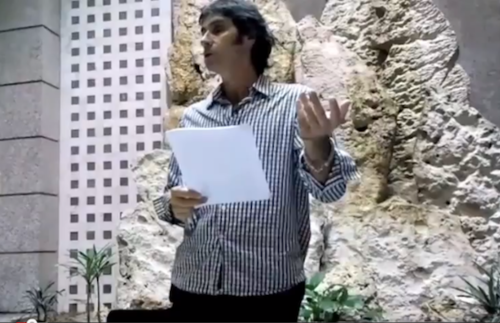 Introduction by Ashley Dawson:In 1970, an adviser to California Governor Ronald Reagan’s reelection campaign commented on the state of public education: “We are in danger of producing an
educated proletariat.  That’s dynamite!  We have to be selective on who
we allow to go through higher education.”After his reelection in 1970, Governor Reagan followed through on this advice by dismantling the University of California’s policy of free tuition.  A similar campaign unfolded subsequently in New York, with President Ford using the fiscal crisis of the city in 1975 to force the City University of New York to terminate its 129-year-old policy of free tuition.

In place of this model of public education as a human right, a new model predicated on education as an investment in one’s future was established. Students were encouraged after the establishment of the Guaranteed Student Loan Program in these years to borrow money in order to pursue tertiary education.

This was, of course, part of the much broader effort to generate higher rates of profit during the 1970s. The elements of this project are surely familiar: breaking labor unions, lowering wages, offshoring production, smashing the social wage, financialization, etc.

Today this neoliberal project is in crisis on multiple fronts.  One of the most serious of these is the investment model of education. Student loan debt is expected to hit $1 trillion by the end of this year, surpassing credit card debt and leaving many individuals in debt for their entire lives.

How to respond to the increasingly desperate plight of the legions of indebted students and ex-students in our society? In this talk at Occupy Wall Street, Andrew Ross offers a radical lens through which to see student debt and proposes a pledge of refusal to spark a movement for the abolition of student debt.