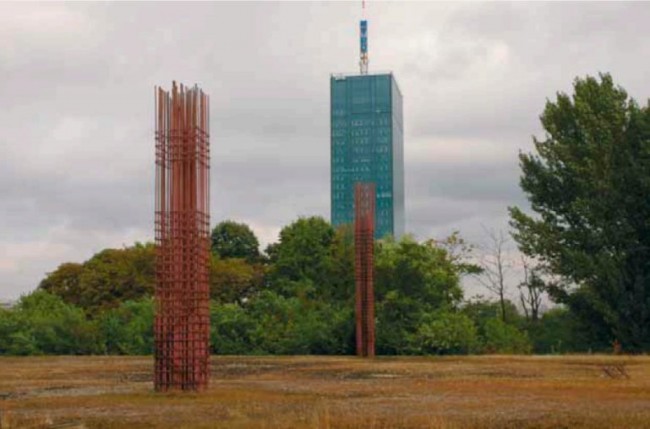 School of Missing Studies (SMS) explores the knowledge that slips through the disciplines of architecture, urban planning, history and art but seems to flow freely in unbounded spaces and networks. It takes a collaborative and experimental practice to scout for this knowledge, rather than wait for it. Although the current belief is that nearly all information circulates, we found that individual initiative to ask questions that were not being addressed by institutions coalesced into a knowledge pool for exchange.

SMS is a network for experimental study of cities marked by or currently undergoing abrupt transition. Some projects span a few days of workshops and others are aggregates of many smaller projects or of months of planning and research. We investigate cities in transition through questions: Do territories have knowledge? How is this organized and stored? Is this knowledge anticipatory or a result of nostalgic delay? Projects to date on these questions include Looking for October; Twist to Wildlife; Manhattan Shadow Project; Teasing Minds: Challenging the Conservative Brain; Balkanize Deutsche Bank; East Coast Europe; and Lost Highway Expedition.

Looking for October was a workshop organized in 2003 within School of Missing Studies that investigated the contemporary meaning of the partisan liberation of Belgrade during the Second World War on October 20, 1944. This investigation was triggered by the fact that 2004 would be the first year that the anniversary of October 20th was not celebrated. This missing holiday had, over the past 50 years, left important traces in the form of institutions, buildings, streets, poems, cultural events, films, magazines, songs, factories. Participants in the workshop were young architects who worked with these traces to create interdisciplinary projects (concerning architecture, art, urban interventions, creative writing which are documented in a collective film) on the topic of the contemporary meaning of urban liberation.

Another project, Lost Highway Expedition, took place during August 2006, through the emerging capitals of the Western Balkans. The expedition plotted a route roughly along the unfinished “highway of Brotherhood and unity,” as it was called in Yugoslav times, traveling thought the cities of Ljubljana, Zagreb, Novi Sad, Belgrade, Skopje, Prishtina, Tirana, Podgorica, and Sarajevo. Although the country that the highway was meant to unify no longer exists, the highway infrastructure remains as a significant reminder of the ideals of voluntary participation, rebuilding, and connectivity. Today as the highway network is being expanded and as the region is experiencing a different wave of building executed from individual initiative, the expedition set out to find out more about these processes and to speculate about its future.

During Lost Highway Expedition almost 300 architects, artists, writers, and curators from Europe, the Western Balkans, and North and South America participated along the route with partner organizations in each city in activities ranging from discussions, public art actions, guided tours, visits to archives, and picnics. As everyone organized his or her own journey, the makeup of the group fluctuated throughout the journey and was distinct in each city. Yet it temporarily cohered around points of common interest to investigate the abrupt and continuing structural and visual transformation of these cities that is both the result and the engine of the changing realities of the Western Balkans and of the future of Europe.

SMS started simply as a meeting of friends who felt that our studies in architecture, urban planning, history and art do not fully address abrupt transition, particularly at a time when the emerging interests of capital threatened the knowledge and experience of public spaces and architecture in Eastern Europe. Now this concern has also come to be global, even in the United States.

One of the inspirations for SMS was Nomads and Residents, a project based in New York City in the early 2000s. The group operated as an email list that came alive. People congregated for informal discussion when a member sent out the word that an exciting artist was coming to town. SMS was meant to have nodes that were more global than N&R, but also operate as a network. One of the initial agreements within the SMS group was not to restrict study to any particular location or situation, so that we can work with individuals, non-profits as well as governments, and we have done all those things.

SMS has never really been an occupation, but a study. The people involved are natural collaborators who need the missing knowledge. Participants come together, dissipate, and reconfigure as needed around topics of urgency. SMS is not an alternative school system. It is rather an understanding among the members that we must go the extra mile for knowledge that does not come through news sources and archives of government or established institutions. However, we have no rules about whom we might collaborate with (including governments), nor rituals about collaborating. In fact, on one hand we enjoy each others’ company, and on the other, we like the fact that we do not need to meet at all and can move forward briskly individually once a common basis has been set.

Learning is a responsibility of every single participant in SMS There is no expectation to educate anyone else or to make conditions for what is called a learning experience. We establish a place and time for participants to learn something that they otherwise would not have been in the position to learn. Our model is less about a consistent subject matter over time and more about coincidental forces of questions, timing and people that make the mix each time SMS finds itself happening again. We are not against the traditional classroom: we just want to expand the possibilities that are at hand. SMS investigates transitions and constructed geographies through modes of spatial inquiry that range from interviews, animations, maps, dialogues, and travel.

Our audience is contingent on the particular inquiry. We do not know if there is a typical audience for what we do. Participants and audience are blurred categories in our projects. People show up at our projects and are participants in shaping the outcomes.

SMS is not the primary practice for any of the founding members, and although we are all also engaged in graduate level education in architecture and art, SMS is neither a formal nor an alternative educational project. It was generated because most of us needed a platform for obtaining knowledge about cities marked by or undergoing abrupt transition.

Self-organization is the core of the SMS project. In fact, a lot has been learned from the ex-Yugoslav, US-backed, experience of self-management and the particular soft version of socialism practiced there after World War II until 1990.

It is very easy for people and forces to mobilize in our projects perhaps because we have this basis. This methodology forms the shared basis for our process of individual initiative to identify topics of interest, pool resources and swap information to create projects in a format that is appropriate to the inquiry. For example, on Lost Highway Expedition, some made sculpture, maps, films, interview and photo sequences, fountains, photo books, lexicons, educational readers, etc. People mobilized, found their own inquiry to pursue, and then worked through their own methods and process to contribute to SMS projects.

Without SMS projects we believe we would not know what we know now about the transitional nature of cities. This is because of the way we come together without preconceived notions about our studies

Technology plays a vital role in SMS. Specifically, the Drupal platform was important in our projects, as well as online platforms that could be exchangeable. As we live on different continents and cities, Skype has proved useful. Some of the people involved, including our partner kuda.org in Novi Sad and mama in Zagreb, were already extremely proficient in using technology for communication and mediation of the content of our research. Also, of course, we use SMS.