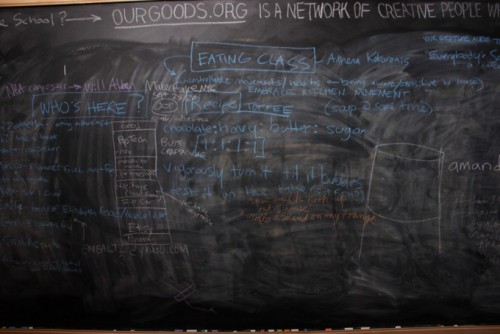 Education outside of the traditional classroom is on the rise. Again. New non-traditional learning scenarios are emerging in many academic disciplines, spurred on by DIY culture, a tidal wave of student debt, and changes in technology. Moving beyond questioning whether these alternative spaces can produce meaningful learning, the case studies in this dossier document and theorize a series of pedagogical experiments in college and post-graduate education.

These texts were prepared for Experiments in Extra-institutional Education, a two-part workshop and colloquium I organized at the CUNY Graduate Center on April 11th 2013. The closed-door workshop brought together protagonists from fourteen projects and organizations and was followed by a public colloquium. Audio from the public session is available in two files: the first 90 minutes, and the closing 30 minutes after we switched to a larger room.

I invited participants who were engaged in efforts to create ongoing projects, rather than people who created one-off events that lasted days or weeks. I focused on New York City as a site as we did not have travel money. I did not filter by pedagogical theory or outlook; my sense was that most people engaged in the process do not have an institutionally-formed sense of pedagogy, but rather have a sense of pedagogy informed by their own practice as teachers, artists, and activists. I was especially drawn to people and groups who could articulate how theory and practice merged in concrete examples of praxis. A number of participants are artists or come from an arts perspective; this is partly because my background is in the arts, but also because artists initiate a large portion of these New York experiments.

The texts in this dossier were written in response to a series of prompts, though I encouraged participants to consider these as one potential starting point, and to choose a different one if they felt it more productive. The prompts are included at the bottom of this introduction. Most of the participants had not met before, so we circulated drafts among the group to help us learn more about each project or organization in advance of our in-person session. In addition, these texts were intended for publication in this dossier as a way of documenting this workshop and phenomenon, and continuing the conversation.

The texts are descriptive and reflective on each individual or group’s educational experiments. While some are more theoretical and/or historical, the goal here is to document the actions and intentions of a group of educators, artists, scholars, organizers and activists. The prompts helped guide that focus, as they asked the contributors to both describe what they have been doing and also reflect upon it. Beyond the Five Ws (who, what, when, where, why), I asked the respondents to describe and reflect on some of these questions:

These last questions are particularly poignant, as this conversation was housed and funded by such a collective social project: a public university.

With the exception of Mark Allen of Machine Project, who happened to be in town, and Carla Herrera-Prats who lives in New York and Mexico City, all of these groups are New York based; it is important to note that this dossier is not attempting to represent the phenomenon as it is playing out elsewhere in the United States, or abroad.

We started the workshop with each participant stating their most pressing issues, what problems they were encountering, and what limits they were bumping up against. Improvising the structure, we decided to organized these into categories (the Five Ws again!) and broke out into smaller groups to discuss these:

Who? To whom are we teaching? Who is the audience or membership? And how is that related to privilege, race and accessibility? What is the role of community? Is it a goal? Is community based on exclusion?

What? What sorts of knowledge can we produce? What modes of learning are possible in this model?

Why? Why now? What are the impacts of the capitalistic market, academic jobs, and accreditation on this process? How is this related to the academicization of the arts?

When? When does a project end? How do we achieve longevity and continuity while enabling flux? How does money change this, for better or for worse?

Despite all of these areas of interest, one of the clearest observations to emerge from both sessions were the rich differences between these protagonists and projects both in terms of their processes and their ideologies. For example, several of the participants disagreed over the moderation style during the public session, which you can hear in the audio recording at 50:40. Several participants pointed out that the conversation in its “popcorn” style facilitation had left several women out of the conversation who had been politely raising their hands (as the popcorn style is wont to do) and suggested that we try taking stack. This was met with conflict and resistance, but I ultimately switched our facilitation style to use stack as an experiment in itself, and in part to show some of the limitations of using stack. When I initially brought these people together, I focused on their similarities, but afterwards, I was struck by their ample differences.

Despite these differences and the intensity of the discussion they produced, many of the participants came up to me after the session to express their excitement about the conversation and hope that it would continue in some form. Aoibheann Sweeney and Katherine Carl of the Center for Humanities were equally excited and invited me to find a way to continue. I reached out to the participants, and several have come forward, and joined me in organizing a public seminar for the upcoming year that will continue the conversation of the issues raised in this one-day session and the texts in this dossier.

Describe your program, project, or organization. What is it that you do? What is your goal?

Why are you doing this? Where did this originate from? Are there particular experiences, texts, people who have inspired you in your endeavor? What are your creative, scholarly or pedagogical influences?

Are you working alone, or with others? If others, where did you meet your collaborators and synthesize your interest into action? How does collaboration or individual initiative operate in your structure and play out in the topics your projects address?

Who is your audience; who participates? In what ways is your program interrogating, transforming or perpetuating the typical audiences for learning.

Where does the time and/or money come from? Does your program or project charge a tuition or fee? Who gets paid? Do you have grant or philanthropic backing? Or is this something you do on top of another job that pays the rent? Does the program have an explicit for/non profit philosophy that is important to discuss here?

Does your engagement in these pedagogical experiments constitute your primary creative/research practice? Is this your art practice, scholarship, or activist work? Do you teach elsewhere, or is this the only/primary teaching work you do?

Most, if not all, of the projects, programs, and organizations involved in this discussion are non degree granting, and not accredited. Is it important and/or possible for non-accredited, unofficial and transitory programs to challenge/compliment/replace the cultural capital aggregation and discursive community building that lies at the core of the contemporary school? What is the importance of some form of traditional or non-traditional accreditation in this process? Are there examples of interoporability, or creative synthesis between traditional and non-traditional programs? Is this an important question?

Given that much of the discussion around non traditional learning, (especially the thread coming from Anya Kamenetz’s “Edupunks” book and site,) is rooted in libertarian and neo-liberal critiques of collective social projects, should we be skeptical about these DIY practices? Despite its best intentions, is the DIY movement complicit in a neo-liberal agenda of dismantling the social functions of society, especially including the state university? How do DIY educational projects function in international locations with very different socio-political contexts? (For example, how do they play out in relation to Bologna or transitional societies?)

The liberal arts and the creative arts are under attack for a lot of reasons, one of them being their perceived usefulness to society. Does your program engage the problem/question of utility? Where do your learning environments sit on the spectrum ranging from an art for arts sake or knowledge for knowledge sake approach, to classes engaged in a more instrumentalized or “useful” knowledge?

What role, if any, does technology play in facilitating your program? Would you be able to do your program in 1970? Why or why not? (This may relate to the next set of questions below.)

Why now? There seems to be a current growth of these kinds of pedagogical experiments beyond Free Skools, and Freedom Schools. Why is this happening now? Why is it important now?

What are the most important questions for you? What has not been asked above? This could be a place to add prompts, or to reflect in your writing.

I want to thank Aoibheann Sweeney and Katherine Carl for supporting the April 2012 meeting, and especially for suggesting that I have participants write something to circulate prior to the session. Without that suggestion, this dossier would not exist. Many thanks to my comrades at Social Text for the helpful feedback they gave the contributors and me. And thanks to Jennifer Stoops and Jonathan Kiritharan for their awesome help in the final stages of editing and publishing this dossier.

Michael Mandiberg is an interdisciplinary artist who created Print Wikipedia, edited The Social Media Reader (NYU Press), founded the New York Arts Practicum, and co-founded the Art+Feminism Wikipedia Editathons. Mandiberg is professor of media culture at the College of Staten Island, CUNY and Doctoral Faculty at The Graduate Center, CUNY.