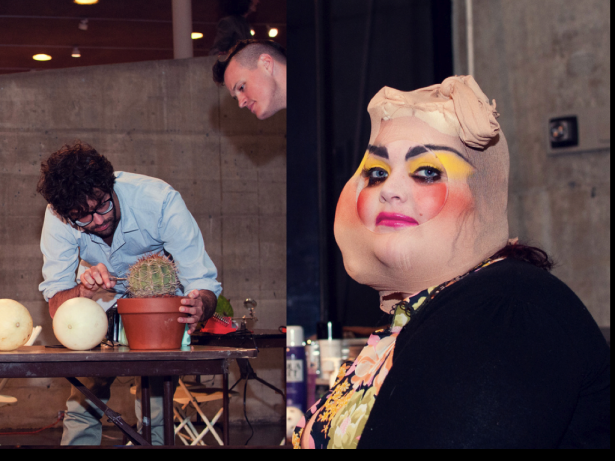 Machine Project was founded in 2003 as a gallery and community space in the Echo Park neighborhood of Los Angeles. We collaborate with artists to promote site-specific non-commercial works; provide classes and workshops relating to technology, performance, and other topics, for artists as well as the general public; and promote conversations between artists, scientists, poets, technicians, performers and the community of Los Angeles as a whole.

Originally, our pedagogical program was very skills-based and technologically located, which came out of me knowing about how to do stuff that other people wanted to know about. People wanted to do electronics, say, so I taught electronics. This provided a lot of the early income for Machine Project, so in the beginning it was very practical. Later it grew into more of an ideological project, exploring the general public’s relationship to the made environment, and the place of technology in that relationship. At the time, I connected to aspects of the maker movement, but since artists’ usage of technology has become more commonplace in our culture, it hasn’t seemed as important to work that specific territory. That said, classes on how to make or do stuff remain part of the core of Machine, and they remain an income source. But our mission now is less about giving people access to technological know-how and more about being involved in the early research and development stages of artists’ projects.

I’m increasingly thinking more broadly about what’s involved in the production of art. I started to think about what art schools do, and I came up with three things. One is accreditation, by which I mean the “professional license” that an MFA grants its holder, but I don’t think accreditation is important for art. The second is enculturation, which I think is an exciting notion to play with, effect, and change. There is a specific, though very plastic, set of philosophies and methodologies that make up the art world, and art school immerses you into some aspects of that. The third, which connects quite closely to the second, is that art school provides a ground for discourse, not only a space where people can talk about art and ideas, but also a way of thinking and practicing those ideas. You don’t learn those discursive codes by yourself but in a process of negotiation with other artists. These two things—the enculturation and the discursive space—are very important. I’m curious and want to investigate the possibility of producing those things in our culture without the MFA system and all of its financial barriers, at least on a small scale.

I am increasingly trying to develop workshops and classes that help build a vibrant scene, like an art school does—one that of course responds to and is implicated in the market but that also produces other channels for thinking about ideas. I’ve done a workshop on how to start your own art space, for instance, and I recently did a workshop on how to design and teach workshops. There are significant differences between the skills-based classes we began with and these workshops that are more about structuring contexts. The outcomes you’re seeking for iOS programing class are pretty concrete, and people take those classes with a transactional intent: they want some knowledge in their brain, and they’re handing over a certain amount of money to get it. The classes I’m most excited by now have a very different set of goals; they’re less transactional and more constitutive, attempting to construct a community or a discourse or a mode of working. I think about Machine Project as a machine for generating the kinds of things that I want more of in the world, and these classes are a direct means to achieve that goal.

I’ve done projects where I explicitly tried to juxtapose workshops that were based on utility and workshops that were not. At the Berkeley Museum, we did a project called Confuse-a-tron, which consisted of four simultaneous workshops: one on plant cloning, one on kimchi making, one on turning cactuses into electronic musical instruments, and one on tranimal drag makeup. The idea was that you would have time to do two or three out of four. Each one was marketed very directly to specific communities of interest, and there were two main intentions with that. One stemmed from the fact that the workshop format is a great place to hang out with somebody else’s subjectivity. You’re focused on making something that’s very directed, and you can meet with and talk to people who are all part of the same activity. “I like making kimchi, and I like to hang out with other people making kimchi.” But I figured nobody would know about all four of these things, so we could mix up the participants so they engaged with different people and subject matter. The other intention was to juxtapose knowledge that seems super practical and knowledge that seems super impractical—like electronics for making cactus musical instruments. You don’t necessarily need a cactus that you can play electronically, but you’re learning engineering and electronics while building it. Making kimchi is a traditional, historically practical method for preserving food, but tranimal drag makeup is not traditional or practical in any sense. This is one of my few curatorial tricks: to create a horizontal relationship between different forms of human production in order to examine and interrogate the pre-assumed hierarchies about them.

So there are classes about skills, like computer programming; and there are classes about structures, such as performance, curating, etc. And maybe there’s a third category, which is more expansively about the pleasures of learning and performance. We did one class with Davide Balula that involved CPR and analog synthesizers. We had four guys playing analog synthesizers, making bleepy bloopy sounds, while simultaneously a retired fire chief demonstrated how to do CPR. No one asks for the distraction of four analog synthesizers while learning CPR, but this is moving in the direction of pleasure over utility. Education’s drive toward utility involves a whittling down of essential knowledge so that you can empirically demonstrate what has been transmitted.

Our approach is making a modestly political statement that learning in the context of Machine Project is primarily about intellectual pleasure. That doesn’t mean you won’t learn things, but strictly “learning” is not the only purpose. It comes back to my core purpose of creating culture and creating knowledge. What’s important about being a scientist, about the action of science, is not what can you do with it, but the activity of trying to precisely map our reality. It’s the same with culture in general. What else are you going to do in the time that you’re here?