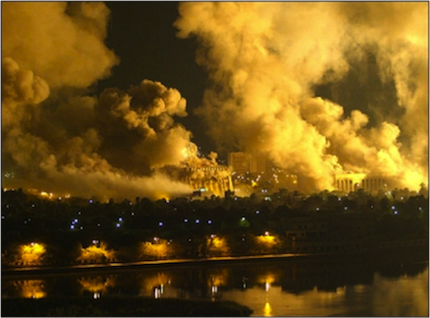 War appears as eventual. Whether via the state’s incitement of its citizens to hate, fight, and kill or the pacifists’ moral injunctions to lay down arms, to desert or refuse, war waged by states is presented as if it were singular and exceptional, a mobilization necessary for the maintenance of peace. Particularly in the societies awkwardly assigned to an ever-shifting West or a uneven, indistinct global North, war appears temporally and spatially elsewhere. When it comes home, it arrives as an intruder rather than as the familiar stranger who has been here all along. Its appearance is an event, an interruption of the peaceful. Living together peaceably, we find ourselves momentarily disrupted by war. Conflict replaces order. Order must be restored.
In its eventual guise, war mobilizes divisions. Generals probably think of these divisions in terms of tens of thousands of troops, as armored divisions or mobile divisions, as “a combined arms unit capable of independent operations.” For politicians the divisions are between friend and enemy, us and them, the loyal and the traitorous. For the history books the division is between peace and war, a temporal division delimited by opening salvos and treaty or surrender. Perhaps surprisingly, war doesn’t demand winners and losers (particularly if we don’t think, as we musn’t, about the dead and displaced). Settlement can be negotiated.
There was a time when the onset of war was marked by a declaration. Not only did the declaration divide time by designating the end of the condition of peace and the beginning of the condition of war, but the declaration provided a justification for war. The declaration was an explanation, what we told ourselves about our willingness to kill and die. Compelled to give an account of our actions, we looked to causes and motives. We appealed to reasons that any and all should accept: self-determination, self-defense, self-evident truths. Although targeted at others, our wars were, at heart, self-centered. We could designate, precisely, when the war began, analyze its origins and causes, what led to it. We could tell ourselves a story about ourselves and our place in the world, a story ultimately about peace even as we could only understand this peace through the staccato beat of war’s intervals.
2
When war appears as event, peace appears as norm, background, negative space, the universe into which order must be restored. The project of peace is restorationist–there is no alternative.  Although himself on the wrong side of the English restoration, the seventeenth century philosopher, Thomas Hobbes, argues for peace in the broad sense of restoration I have in mind here. For Hobbes, peace is necessary because its alternative is a life that is “solitary, poor, nasty, brutish, and short.”  Leviathan, his influential justification of sovereign power, relies on a stark either/or: either a war of all against all or an absolute sovereign. According to Hobbes, fear of violent death and desire for commodious living motivate us to seek peace; reason tells us we are most likely to achieve it if we lay down our right to all things and entrust our security to a sovereign. Hobbes comes close to acknowledging that the promised security is a fantasy in one of his defenses of his account of the state of nature as a state of war:

It may seem strange to some man, that has not well weighed these things; that nature should thus dissociate, and render men apt to invade, and destroy one another: and he may therefore, not trusting to this inference, made from the passions, desire perhaps to have the same confirmed by experience. Let him therefore consider with himself, when taking a journey, he arms himself, and seeks to go well accompanied; when going to sleep, he locks his door; when even in his house he locks his chests; and this when he knows there be laws, and public officers, armed, to revenge all injuries shall be done him…

Even where there is lawful power, we don’t feel ourselves secure. But Hobbes doesn’t allow this experience to incite skepticism toward the peace sovereign authority promises. Instead, he holds out the horrifying incentive of the war of all against all, a condition which, even as it may not have ever really existed, is too ill for us not to do everything in our power to avoid. In such condition, there is “no arts; no letters; no society.” And, in addition to “continual fear, and danger of violent death,” we subsist in a condition in which “every man has a right to every thing; even to one another’s body.”
These are powerful incentives to peace. For Hobbes, no cost is too high — not even life, since one can’t secure one’s life without peace.  Yet peace remains out of reach, a fantasy strong enough to direct our reason around our experience of a daily life of insecurity and suspicion and toward its own subjection.
3
Posted on Facebook by the nonprofit organization War Times/Tiempo de Guerras at approximately 6:30 pm on December 14, 2012: “Today’s latest mass shooting in Connecticut is a chilling reminder of the militarization of American society — from an unregulated gun market, to the failures of our health system, to the ways in which we are taught, thanks to U.S. history and foreign policy to settle our grievances and pain with violence.” 4
War appears as a lie. The actual life of capitalist societies is class war. There is nothing that is beyond this war. The tyranny of corporations, the degradation of the food supply, the exploitation of the workforce, the extortion of the finance sector — this is the actuality of capitalism. The production of “war” as an exception functions not only to support and extend the fantasy of a capitalist peace but also to occlude capitalism’s fundamental quality of class war. Capitalism is nothing but class war. Requiring the permanent revolutionizing of the means of production, it demands and receives an ever-expanding arsenal for subjugation — the militarization of the police, enclavement of the ruling class, extension of the apparatus of surveillance, growth of the penal system. Police protect banks. Law serves creditors. Championing of the “right to work,” governors demolish unions. The immiserated, indebted, and precarious are necessary components of our present capitalism, the contemporary reserve army of the un- and underemployed, the service sector, service class, servants and serfs in becoming. Someone’s got to do that work. The indebted are doubly exploited as their futures belong to someone else. To the extent that their debts are packaged into asset backed securities (such as collateralized debt obligations), they become themselves the spoils of war, virtual serfs owned by one bank or another.
5
Spectacle is the form of war’s appearance as a lie. Obscuring lived war in its desperate monotony and privation, spectacular war offers explosions, excitement, release.  Energy is concentrated into singular moments changing everything and nothing. There are no in-betweens here; one of war’s lies is that it’s all on the line, right here and right now. No one would kill and die for a slight modification.
“What we encounter in the spectacle is our very linguistic nature inverted,” writes Giorgio Agamben.  Hegel is perhaps the best theorist of this inversion, with his romantic idealization of war as ethical necessity. For Hegel, the “true bravery” of “civilized peoples” consists in sacrificing oneself for the state. This sacrifice is not heroism, but its sacrifice. From one, the individual becomes “one of many.” Universality expresses itself in belonging to something more. Hegel explains:

An utter obedience or complete abnegation of one’s own opinion and reasonings, even an absence of one’s own spirit, is coupled with the most intense and comprehensive direct presence of the spirit and of resolution. The most hostile and hence most personal attitude towards individuals is allied with perfect indifference, or even, it may be, a kindly feeling towards them as individuals.

It’s dialectical. Friend and enemy are the same person from different perspectives. Apparently even that division Carl Schmitt identifies as fundamental to the political is overcome in war. It’s not personal; it’s business.
Agamben locates in the spectacle “something like a positive possibility” that we can use against it. The spectacle is destructive because it expropriates “the possibility of a common good.” This is the positive possibility we can use against. For Hegel it was the ethical urgency of freedom, understood as submission and service to a higher order.  His mistake, as Marx made so clear, was in the idealism of his vision of this order, an idealism for which the disorder of market, worker, and rabble are just so many moments of the Idea.  Hegel’s Spirit is at home in the world only because he doesn’t see the war at home.
And if we stand Hegel on his feet? His description of submission “to the external order and life of service” sounds a lot like an abstract rendering of class war. The one percent is likely indifferent to the rest of us, may even feel kindly toward one or the other of us as individuals, but that is coupled with its obedience to the impersonal system of property, finance, and debt in which we are trapped. The rest of us go along in much the same way, misled into hesitation and compliance to protest lamely, “They only call it class war when we fight back.” It’s always class war.