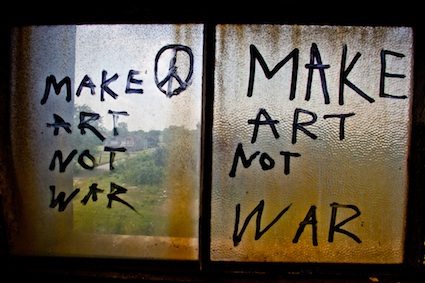 In July of 1945, just as the conclusion of World War II was coming into view, Vannevar Bush, former dean of engineering at MIT, then administrator of the twin war-time revolutions of radar and the atomic bomb, founder of Raytheon (the future Cold War military industrial powerhouse), and soon to be advocate of a National Research Foundation (to support basic research in the United States), asked in a provocative The Atlantic article “what are the scientists to do next?”  Acknowledging, “it has been a war in which all have had a part,” he contemplates what comes after a total mobilization of society (involving military, industry, science, journalism, politics, and civilians) against a global enemy.  What happens to all that expertise, all that social energy, once the war is over?  His radical answer, of course, was to recommend that U.S. institutions simply stay mobilized, to confront the future itself as a project requiring drastic new forms of technological engineering for the good of both commerce and security.  Thus, before the atomic bombings of Hiroshima and Nagasaki pushed the Japanese leadership to actually surrender, Bush is already thinking of the next act for the fledgling U.S. military industrial economy, of how the extraordinary productivity of a new kind of technoscientific war machine could be extended into a post-war future.

In a fascinating move, he focuses his “As We May Think” article on information technologies, and specifically on the problems of archiving and retrieving knowledge as it proliferates across scientific fields.  He focuses on emerging new modes of image making (television, photography, film) and imagines future calculating machines that are eerily prescient of the coming world of computers, hypertext communications, and digitization.  Bush considers information overload as a barrier to social progress, and contemplates how to actualize the full potential of knowledge production across the sciences and professions in real time.  Widely remembered today as a premonition of the coming information economy, we could also read his essay as a roadmap for a permanent military-scientific mobilization, as a basic means of engineering the American future.  For example, it is crucial to know that much of the technological innovation in photography over the next generation would come from military-scientific efforts to photograph the exploding atomic bomb, a process which revolutionized high speed photography, color and specialty film stocks, and ultimately produced high definition digital imaging.  Similarly, our contemporary world of information technologies was founded on the Cold War investment in digital computing by the Defense Department, which invented networked digital communication — the foundation for today’s internet — as a means of solving the problem of maintaining command and control during nuclear war.  Moreover, work on the atomic bomb has pushed the frontier of supercomputing for decades — with the fastest computers in the world residing at the U.S. national laboratories devoted to the U.S. stockpile.  Thus, while Bush contemplates the revolutions for law, medicine, chemistry, and history of instantly available archives of expert knowledge — or as he puts it “science may implement the ways in which man produces, stores, and consults the record of the race” — he also approaches science itself as an instrumental state project, a necessary means of crafting the future through achieving ever greater technical capacities across the range of expert practices. In this way, science as instrumental reason is implicitly nationalized in Bush’s presentation, a game played for American advantage in the dangerous world of competing corporations and nation-states.
Thus, in addition to the specific revolutions in information technologies he forecasts in 1945, Bush offers a more structural — and profound — articulation of the emerging U.S. social relationship to knowledge production itself.  Knowledge has meaning in the first instance in this account as a form of military power, making war the ideal form, as well as the unending motivator, for science and technology.  We can imagine that his managerial overview of spectacular war-time achievements — radar and the atomic bomb — cemented this concept of a permanent technological revolution for Bush, who projects constant innovation across the sciences into a deep and dangerous future. He concludes his essay by stating:

The applications of science have built man a well-supplied house, and are teaching him to live healthily therein. They have enabled him to throw masses of people against one another with cruel weapons. They may yet allow him truly to encompass the great record and to grow in the wisdom of race experience. He may perish in conflict before he learns to wield that record for his true good. Yet, in the application of science to the needs and desires of man, it would seem to be a singularly unfortunate state at which to terminate the process, or to lose hope as to the outcome.