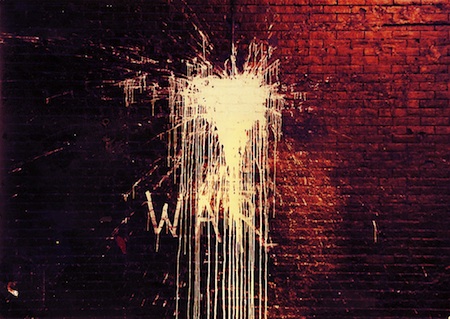 Long ago, on the lip of memory, when wars against Afghanistan and Iraq were offered as ways to deliver the world from terror, I recall reading a report on what U.S. military planners took to be the political limit of American casualties. The study surmised that if the number of U.S. soldiers killed exceeded 5,000 then surpassing that threshold would trigger an anti-war movement which would render military operations unsustainable. The anticipation of opposition at home and abroad was built into planning the invasion and imagined a rapid entry and sudden departure of occupying troops. Quagmire would be avoided as the next war was prepared to avert the last anti-war. Most of the features of this plan played out in reverse: millions gathered world-wide to protest a war that had not yet begun; rapid deployment left ground unheld; the occupying armies stayed on through mounting mission uncertainty. Try as I might, I cannot locate that article with its magic number, buried no doubt under the rubble of coverage or in the recesses of my imagination.

What my search compels me to remember is that the count is a coercive calculus. Measured in these narrow terms the war was a success, for nearly ten years on and a series of pre-emptive endings and handoffs later, one feature of the initial plan held — American deaths remain under that threshold of five thousand (4,488 at the end of 2012). What this, the longest planned war in contemporary history (in effect since the prior war against Iraq in was suspended by George H. W. Bush’s declaration of a cease fire on February 28th 1991) succeeded at doing, besides avoiding being brought to an end by political mobilization (despite its sustained unpopularity), is altogether more elusive. The emphasis on minimizing the American body count was achieved by rendering Iraqi deaths uncountable. Indeed, estimates from various sources of Iraqi dead — both civilians and combatants range from over 100,000 to over 1,000,000 with another 5 million displaced inside and outside Iraq (IBC, Lancet, Opinion Research Business Survey). In this regard, the dismembering of Iraq is but a chapter in a larger spread of belligerence, once referred to as Pax Americana, although in actuality an imperial reign that has been anything but peaceful, with some fifty U.S. military operations around the world killing around four million people. Even as the operations in Iraq and Afghanistan wound down in 2011-12, American drones dropped death on people in Pakistan, Somalia and Yemen, while other lethal tactics were applied in Honduras, Kenya, Libya, and the Philippines (Kroth).

Yet even this framing poses challenges of its own. American rule has been bloody but disinterested, tactically acute but unable to clarify or consummate its ends. There is far more continuity in the capacity to apply force than to know what to make of its application. Body counts are a measure of finality without purpose, whereas what survives, albeit in altered states, encumbers the appraisal of what war has wrought. A logic or logos is a form of rhetoric, a means of persuasion. The Greek verb legō includes meanings of counting, telling, saying and speaking. It amalgamates numeration and narrative, as in an account that would laminate together number and name. The slippage between counting, telling and persuading, so crucial to the ongoing persecution of war also overstates the continuity of means and ends, passion and interest, tactics and strategy and makes of violence the imponderably same.

The rupture of periodization, technology, new forms of warfare insinuate the problem in reverse, announce with confidence that we are free from past injustice to be able to intervene again (Meister). This is the purported virtue of pre-emptive war, to attack before memory can coalesce, and consequences can be adumbrated, to inflict a temporal grammar that separates past, present and future so that progress without necessary purpose can be assessed. As formidable as the war ships are, they are leaky vessels, leaving residues that spread on both sides of the boundary they would have sought to secure. Wars that start as a reaction to impending threats aspire to convert risk into the spoils of appreciable gain, a self-rationalization or logic that must generate the sequential partition of time and space, of self and other, friend and foe, said to be its originary condition. It is here, perhaps more than anywhere else that the un-sustainability of borders between here and there, what has been and what is to come, has rendered what once counted as spoils into spoilage and hastened a confusion of evaluation as to where war leads without letting go of how it leads us. How do we think about the living aftermath of what refuses to end?

For U.S. military personnel, the other displacement has been from the dead to the wounded, with the latter approximating the 55,000 dead during the U.S. war against Vietnam. A larger number still is those American soldiers who experienced a head concussion, over three hundred thousand, again a tremulous estimate given the lapses in recording and treating this trauma. Better documented, is the increase in suicides among returning combat veterans which, by 2012 were occurring at a rate of 25 for every battlefield casualty. A recent account of an officer, Ben Richards, who returned from multiple tours of duty in Iraq with serial concussions in a unit he led where 90 of 100 of his colleagues were similarly injured, provides a portrait of an accomplished mind left to witness the gradual disappearance of his intelligence (Kristof). The relative decrease in battlefield mortality has been attributed to a range of improvements in combat medicine. Some are simple, such as changes in how tourniquets are applied, and others rely on more sophisticated treatment of wounds (Kragh, Jr.).

Yet whereas the war opened with the techno-confidence of shock and awe, wherein overwhelming firepower was to persuade the enemy that resistance was futile, the ungovernability of such media of control quickly become evident. As is now familiar, the war on terror became a machinery for summoning and amplifying the very tactic it meant to quell. From the infantry cloaked in body-armour to the mobile units cased in steel, the improvised explosive devices (IEDs) which were the chief technological innovation of the Iraqi opposition, the bony vault that once secured the invading brain from harm now became part of the munitions against occupation. The persistent redeployment of the same soldiers through multiple tours, and the refusal to recognize the physicality of these internal wounds, meant that the head traumas would be carried home upon discharge. From shell shock to post-traumatic stress disorder, soldier’s bodies have long borne the traffic from the violence of the battlefield. The extreme and repetitive deployment that professionalization of the military concentrates amongst its forces, combined with treatment and employment challenges upon discharge, suggests a persistence of the wounds of militarization in the time and space of civilian life.

The initial accounts of blowback that comprised the sorrows of empire situated terror as a return of the repressed from outside to inside the national sanctuary (Johnson, 2000; Johnson, 2004). In retrospect, more sorrowful to that empire is the longer course of its machineries of violence now returning to a land without peace. To claim that such violence is the consequence of a culture may cede both too much and too little to what could be meant by that latter term. There is no single corridor that runs from the totality of the nation state to the singularity of the violent episode, as the phrase “culture of violence” might imply. Neither universal health care nor lower rates of gun ownership (31% versus 89%) prevented Anders Breivik from killing 69 Norwegians in 2011 any more than the parsimony towards general access to medicine and the 270 million guns that civilians in the United States hold placed Adam Lanza at the Sandy Hook Elementary School on December 14th 2012 (gunpolicy.org). The former was framed as a rupture of national tolerance, the later a shredding of small town innocence, both of which fuels a moral panic around murderous violence whose culture can finally be reformed through national consensus. And yet, in the United States, murder rates have declined by half from 2001 to 2010 (from 9.8 per 100,000 to 4.8 per 100,000, respectively). Granted, these averages mask a wide chasm between race and class with New Orleans at over ten times this rate and Long Island less than half. But if homicide rates are back to where they were in 1961, violent crime (at 160 versus 400 per 100,000) is down from the 1991 peak (758/100,000) but still more than double what it was at the start of the sixties (FBI.gov).

When the focus of violent accounts is on homicide there is a parallel with the calculus of combat death. Both center the picture of violence on a discrete terminal act that lends itself to over- or under-representation. On the other hand, the displacement of the wounded into the inner integuments of the nation has its closer correlate in domestic violence. While recent data have suggested a decline in rates of some child abuse, the estimates of nearly one quarter of girls and adult women who are targets of violence operate at a scale of millions rather than thousands. The scope of abuse references a sphere of domesticity whose purported security is instead the most abiding scene of violation (Goode, Hopper, Tjaden and Thoennes). These circuits for the transmission of trauma, traverse those enclosures of family, nation, institution, and indeed culture itself, that once legitimated themselves through affirmations of security.  But now, as with imperialism, patriarchy, capitalism, we can add the cultural as a medium of transmission by which a principle of situating populations through the partitioning, bounding and classificatory effects of violence is itself subject to an encompassing violation.

Unlike the famous postscript of Deleuze that distinguishes a society of control from one of enclosure, it is difficult to see in the walking wounded and generalized violation a coherent coding from all the disparate mobilities and differing abilities that are unleashed. Rather, it seems that those vast continuities of order and separation no longer abide their prior distributions of interest, alignment, and trajectory. Released from this architectonics of space and time into which public and private, future and past had been crafted, we may now be able to revisit the scene of Pyrrhic victory in bellicosities foreign and domestic. In both theaters, body counts go down for military and civilian deaths while wounds and traumas are widely dispersed a paradox which asks for a different logic, another way to address the link between counting and telling. Perhaps in the movements, both anticipatory and consequential, against and beyond the grand formations of violence, including even the fixity of culture itself as an elision of various political economies that it must address, there is a capacity to reformulate and redirect the plans of war which we must now strain to remember. Doing so will not stop the violence, nor make its various modes equivalent, but may just reassemble in the imagination those vast capacities that the warring and abuse were meant to stop, but that never can really be arrested.

Chalmers Johnson, The Sorrows of Empire: Militarism, Secrecy and the End of the Republic (New York: Metropolitan Books, 2004).

Jerry Kroth, “A Culture of Violence: Behind the Connecticut Massacre” December 17, 2012 Counterpunch (www.counterpunch.org)