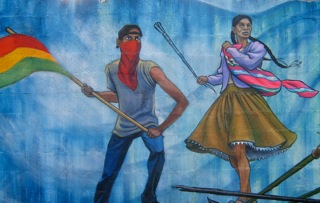 A year and several months ago, I returned to New York from the World People’s Conference on Climate Change and the Rights of Mother Earth in Cochabamba, Bolivia.  While at the conference, I live blogged events in the many different forums of the conference, and also posted short analytical essays chronicling my reaction to the various interventions unfolding at the conference.  Social Text online now presents these different pieces as a unified dossier in order to preserve this important historical moment.
Looking back over the events I chronicled, I’m struck by the incredibly progressive vision and sense of political will of many of the conference’s protagonists.  In many ways, the conference seems like a culmination of the global justice movement, both in terms of its radically inclusive, horizontal organizational format and in terms of its commitment to establishing an alternative, non-capitalist world order.  As an activist from the Global North, I felt particularly privileged to be in the company of so many visionary, seasoned revolutionaries from various parts of the underdeveloped world, as well as in the company of a group of amazing activists from the U.S.  I hope that the record I tried to create of the revolutionary vision articulated at Cochabamba will serve as an inspiration as we try to save our increasingly imperiled planet from the cataclysmic social and environmental forces that threaten it.
Returning to the U.S. from Bolivia, the magnitude of the challenges faced by the movement for Climate Justice became almost immediately apparent.  The day after we touched down in New York, the Deepwater Horizon oil rig exploded and began fouling the waters of the Gulf of Mexico. In the months that followed, the mendaciousness of big oil companies like BP was dramatically in evidence, as was the complicity of the U.S. government in attempting to cover up the long-term implications of the toxicity unleashed in the Gulf.
Since then, there has been little positive movement towards Climate Justice on either a national or an international scale.  Meanwhile, the signs of what Christian Parenti, in his newly released book Tropic of Chaos: Climate Change and the New Geography of Violence, calls a catastrophic convergence of climate change and already-existing crises of poverty and violence grow clearer every day, from the massive floods in Pakistan in the summer of 2010 to the terrible drought currently affecting the Horn of Africa.
As Christian Parenti argues in Tropic of Chaos, the catastrophic convergence is unleashing unprecedented forms of violence in much of the underdeveloped world, while augmenting trends towards what he terms the politics of the armed lifeboat in the rich countries of the Global North: attempts to expel immigrants, police borders, and clamp down on any dissent.  Faced with these malign twin forces, I believe the principles of climate justice laid out at the World People’s Conference on Climate Change and the Rights of Mother Nature are more important than ever.  Faced with the catastrophic convergence, we must reaffirm with renewed zeal the rallying cry articulated by Bolivian president Evo Morales and the social movements that gathered at Cochabamba – pachamama o muerte! (Mother Earth or death).