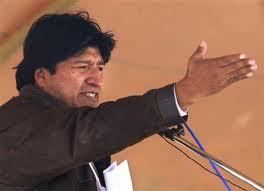 Pachamama o muerte!  For the planet or for death!I salute the social movements, unions, government representatives, and many people who have come to Bolivia, the heart of the Americas, to participate in this conference in the defense of pachamama.
Copenhagen wasn’t a fiasco; it was a victory for the people and a failure of the powerful nations of the world. It’s the so-called underdeveloped countries protect who respect Kyoto.   The Copenhagen Accord will lead to warming of more than 4° Celsius. That’s why we’ve called this meeting. We’re facing mass extinction and other terrible effects.  We need to establish a limit of 350ppm of carbon in the atmosphere.
But underdeveloped countries are only responsible for 5% of greenhouse gas emissions. Developed counties are blocking any kind of progress on this front. The COP15 agreement eliminates the Kyoto Protocol, and the responsibilities of developed countries to cut their emissions.
Capitalism is the major element responsible for the destruction of the Earth. Capitalism depends on the greatest profit possible. Yet globalization is manifestly creating poverty. For capitalism, we’re only consumers or workers. There is no other aspect to our identities. Capitalism commodifies everything. We must choose either corporations and death or life.
We cannot live in harmony with Earth when a few people are controlling the vast majority of the planet. Our new system of collectivist socialism will solve these problems. We are against unlimited development.
We are united here to celebrate the role of indigenous peoples as stewards of the Earth and as an alternative to unsustainable development. Mother Earth belongs to all of us and cannot be sold. Capitalism is synonymous with the destruction of the planet.
For example, capitalism persecutes indigenous people for raising coca, a product we used for centuries before European conquistadores arrived. But today our indigenous communities know that tea made from coca is one of the best medicines available. We have to reverse the illegality imposed on use through the ‘War on Drugs.”  What if we decided that another traditional indigenous food, quinoa, was illegal and went around persecuting health food proponets in the US for eating it?
Genetically Modified Organisms are another example of how the West’s values are wrong. We know that eating GMO chicken makes men effeminate (!). GMOs also create baldness, so if we all eat them soon the entire planet will be bald.
We also need to embargo Coca-Cola. This drink only makes us sick. I know certain plumbers who use it to unclog toilets.
Another example is the difference between traditional clay plates and plastic plates (Evo tells the UN representative that when he went there for dinner, they gave him food on plastic plates).
Evo then takes a poncho, the type worn by indigenous people in Bolivia, and demonstrates how waterproof it is by pouring water all over it.  He is flanked on both sides by generals, and the water goes dangerously close to them as it swirls off the poncho.
Evo then says that these small examples show that we need to go back to indigenous ways.
Capitalism constantly invents wars, he says. Wars on drugs. Wars on terror.
When it can’t sell its products, capitalism manufactures weapons and starts wars in order to sell those weapons.
If we unite all the people, we can defeat capitalism and imperialism, and save the planet.
Evo then advances a series of five action points:
1)    reduce carbon dioxide levels to 350 parts per million
2)    Prod the UN to sign the Declaration of the Rights of Mother Earth
3)    Open frontiers to receive the millions of climate migrants in coming years
4)    Help underdeveloped countries adapt to the effects of climate change
5)    Recognize people’s rights to things like water, and recognize their right not to be exposed to things like excessive pollution.
We need, Evo argues, a huge global intercontinental movement in support of the rights of Mother Earth. We need to indict the countries that don’t support the Kyoto Protocol in the International Criminal Court.
We are confronted with two paths: pachamama (Mother Earth) or the path of the multi-nationals. If we don’t take the former, the masters of death will win. If we don’t fight, we will be guilty of destroying the planet.
Two paths: pachamama o muerte.