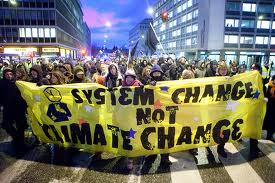 Before everything else, the Cochabamba conference was remarkable for bringing together a large group of radical activists from all around the world. The social connections and sense of possibility that resulted from the exchanges that unfolded in this setting were immensely valuable. For an overview of the conference that includes many interviews as well as the official publications of the various different working groups, check out the conference website.
These social connections will be hugely important in building the movement for climate justice on a local, national, and international plane in the coming months and years. Based on my interviews with activists on the trip back to the US, being in Cochabamba made North Americans particularly aware of the responsibility they have as citizens of the most affluent and most powerful (but also most energy-consuming) nation on the planet. What kinds of accountability can we articulate in response to the experience of meeting activists, intellectuals, and campesinas from the global South? More importantly, what specific actions can we say that we are engaged in in order to challenge the US’s disproportionate carbon footprint and regressive politics on climate change?
One of the most immediate steps on people’s minds seems to be to continue organizing and networking efforts. Activists who were at Cochabamba are already planning to link up again at the US Social Forum, creating a special stream within the forum in order to continue to develop strategies for organizing. The goal will be to develop a consistent position to take to the Cancún meeting of the UNFCC in late 2010.
In addition, activists will continue to pressure the Obama administration to adopt a more progressive position regarding climate negotiations. One of the concrete outcomes of the Cochabamba conference was a series of proposals that are intended to place pressure on the UNFCC process. Apparently at least seven of the Working Groups were designed to produce proposals to influence the UNFCC. The deadline to submit these proposals is this coming Monday — hopefully the Bolivian government and activists working with them will submit them in time. These proposals will then be used to pressure the Obama administration.
I personally am not particularly sanguine about any significant shift happening in the Obama administration. And even if Obama were to adopt more progressive positions and, say, to pledge to cut US emissions to a point where global carbon dioxide levels could be reduced to 350ppm, he’s stuck with a Congress that is virtually guaranteed not to go along with such pledges. But one has to work at rolling this stone up the hill, even if it threatens to roll back down on top of one.
Given this political reality, though, it makes sense to adopt a two- or three-track approach that involves using the modicum of access that activists have to Obama in tandem with campaigns to transform and to green urban and regional economies. Involvement on organizations such as the Regional Plan Association, Urban Agenda, and the Apollo Project will be important in this regard.
I also think it’s essential to engage in direct action. There’s been relatively little discussion of this at the conference, but this is largely because Evo was seen as an ally. Direct action is likely to figure far more prominently in Cancún. But I don’t think that protests should be limited to the mega-conferences. Local action is obviously important as well in order to continue to challenge fossil fuel industries.
In the meantime, hopefully the Bolivian government’s relatively progressive position will also begin to turn the tide internationally, forging a block of developing nations interested in green alternatives to the established path of development while also prodding big polluters like the US and China to begin changing their policies.
But all of this feels like reading tea leaves in very murky waters.  Whatever may come, participating in the conference has been quite transformative for me on a personal level. I came into the conference with a very pessimistic analysis. Basically, looking at the failure of the Copenhagen conference as a result of the growing conflict between the US and China, I felt that we’re leaving a moment of super-imperialism in which the US dominated the globe, in combination with a series of regional subsidiary proxy powers, and entering a moment of increasingly strident inter-imperial competition. We’re returning, in other words, to similar conditions to those analyzed by Lenin in Imperialism: The Highest Stage of Capitalism. This time, however, the theme should be more along the lines of Imperialism: The Final Stage of Capitalism since the eco-imperialist component of current capitalist culture is pushing the world’s ecosystems to the breaking point. Given this rising eco-imperialism, I think it’s unlikely that either the U.S. as global hegemon or rising powers such as India or China are going to sign on to any climate accords.
I still think that this analysis is correct. This is the big picture we’ll have to cope with in coming years. Nonetheless, the Cochabamba conference showed that it’s possible to at least formulate and advocate for a rational alternative to such suicidal policies. By getting involved in policy formulation and social movement politics, in other words, it’s possible to overcome the sense of apocalyptic despair that the status quo inspires. It’s also important to note that while attending the conference I was fortunate to meet many truly extraordinary people. This too inspires great hope.
Perhaps most importantly, what I witnessed and participated in while in Bolivia was the birth of a global counter-force to the eco-imperialist juggernaut that seems so unstoppable in North America. The odds are stacked very high against this global movement for climate justice, but that should not and cannot stop us from giving our all to this movement.  After all, what alternative is there?  Pache mama o muerte!