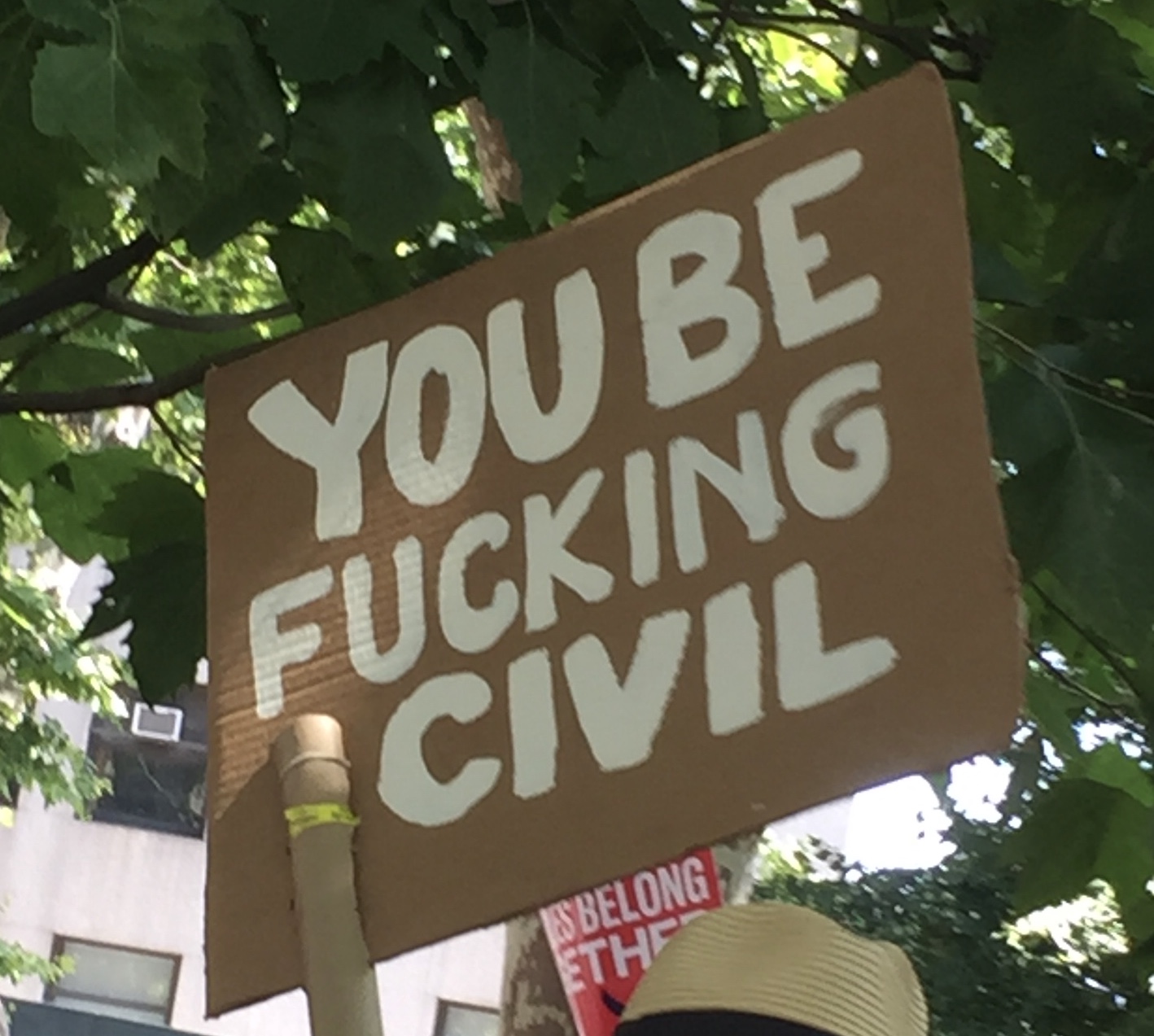 “When they go low, we go to war.” —Anonymous

“This is a show tune, but the show hasn’t been written for it yet.” —Nina Simone

1. Incivility is anger directed at unjust civil ordering. It is a rage directed at political structures that triggers a negating response that labels it “personal.” But incivility is radically different from the disinhibited expression of anger and the incitement of violence in the service of a white settler order, such as we daily experience around us. Left incivility is the strategic outward direction of rage–out-rage. If you aren’t outraged, you haven’t been paying attention. If you are outraged, we need your anger as an energy. Don’t be fooled or misdirected.

2. Civility is not care, but it pretends to be; civility is the affective shape of administrative violence. It is the velvet glove around the iron claw; it is the rationality of logistics. Civility discourse enforces a false equation between incivility and violence that works to mask everyday violence as a civic norm. The violence that is polite is thrice as damaging as the direct attack because it gaslights as it wounds. By contrast, a radical incivility makes space for the fullness of the presence of pain and anger, as well as a diversity of styles through which both pain and anger emerge to be heard as objections to the crisis ordinary. Far from giving in to individuation, radical incivility turns us from individual pain to structural analysis; it is a with-ness that turns us toward each other. In this sense we understand radical to be a term that undoes the arkhe of subjectivity.

3. Calls for civility seek to evade our calls for change. The accusation of incivility is a technique of depoliticization aimed at undoing collectivity. We do not need to debate civility; we need to clarify, expand, and intensify our demands. How one responds to the charge of incivility is a useful litmus test separating liberals from radicals. Even when liberals and radicals must join causes, it is always useful to know where we stand: liberals individuate; radicals collectivize. When they tell us to be more civil, we need to go bigger, ask for more, come back harder.

4. Civility is a political aesthetic that obscures its politicity by asserting that it is “only” an aesthetic or a style. It is thus an aesthetic that is served by the assertion that aesthetics and politics are separate realms. Civility, particularly as it defends the separation of aesthetics from politics–or history–within institutional structures such as the university, is ultimately invested in the work of defending civilizational racism.

5. We can’t expect to know in advance how a person on the way to becoming a trusted friend or comrade will use their anger. If someone you don’t know well shows you their anger, they could be displaying an immense trust in you. They might also be risking everything, especially if they are black, brown, female, trans, crip, undocumented, or queer. The fact is some of us only build trust face to face. Presence isn’t a conspiracy.

6. These theses on civility toggle between addressing the state and its apologists, on the one hand, and activist counterpublics on the other. Civility debates thread the screw that joins these two planes of discourse. Of the delaying tactics used by power to shut down radical politics, civility is one of the most effective and reliable, since it tends to split the seasoned activist from the newly outraged. Here we do not conflate the seasoned with the aged and the new with youth. One trick for bypassing this conflict is to know the difference between calling out and calling in. What if the tension between the two modes of speech/acts is a productive tension? If we reside more deeply in the differences that disguise themselves as tone, against the oedipal drama of strategic differences, we might form affiliations beyond and behind what power sees.

7. What would it mean to see incivility as the sign of one’s own imminent irrelevance, and to welcome affective disruption as a sign of an as-yet untapped intellectual vitality still in political formation? Let us begin to see the call-out and the call-in not as alternatives to each other but in fact as a ritual of hospitality that is dialogically and dialectically productive because it sees past the shame response into a radically open future? What if we hear the call-out as a request to be invited inside; what if the answering call-in greeted the undoing of the inside totally?

8. Civility is the site where the difficulty of articulating class and race together becomes clear. And it is simply impossible to do so without breaking with civility as we know it. In civility, we can say, anti-racism reveals its investments in class, and class reveals its investments in racism. This is why the violence that happens under the guise of civility often feels like an aesthetic violence. It is the weaponizing of disgust, the subtle retreat, the flared nostril. But whatever the aesthetic category, and however blatant its relation to racist ontology, it at all times negates the rights of the other to make claims on the space of politics.

9. Liberals say activists are being uncivil as a mimetic response to the incivility of the Right. We must take care not to accept this double blackmail. We must not accept this reactive and defensive account of the origins of our struggles and ways of struggle. The use of incivility on the Right is precisely an affective and emotive strike at the heart of so many strategic failures of left and centrist politics. It gains in strength from the capitulation of left and centrist politics to respectability, and from respectability’s investment in capitalism’s veredictory and meritocratic myths. We applaud leftist organizing that bypasses ruling-class style in favor of an anti-racism aimed at undoing capital. Let unions be engines of anti-racist activity; let us return to protest as the assembly of collective indignation.

10. Nonetheless, we remain vulnerable to being charged with incivility. Because we are always vulnerable, and differentially exposed to the charge of not being civil, postcolonials and other minoritarian subjects have conceded the utility of strategic and temporary deployments of civility. Homi Bhabha calls this sly civility, and we slyly take that as a cure to perform high incivility masked as high civility. This counter-civility can take many forms. In an American context, California Representative Maxine Waters declares that she is “reclaiming my time.” A break with civility, performatively considered, is well served by deep knowledge of The Rules. Read the handbook. Know the Rules. Reclaim your Time. And ours.

11. The opposite of civility is not incivility, but militancy.

Kyla Wazana Tompkins is associate professor of gender and women's studies and English at Pomona College in Los Angeles, California. She is the author of Racial Indigestion: Eating Bodies in the Nineteenth Century. Her writing can be found at kylawazanatompkins.com. Photo: Robert Chang.