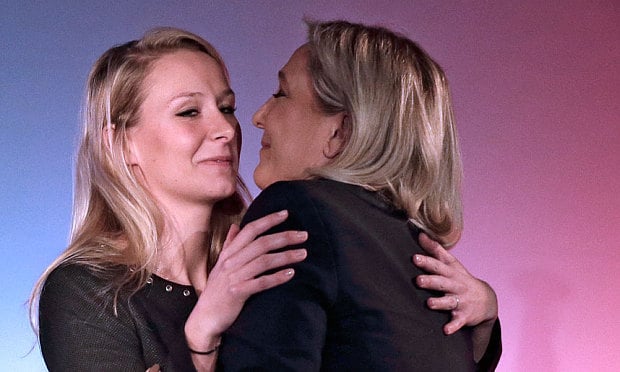 On 21 May 2002, millions of French people watched with surprise, anger, or disgust as the face of Jean-Marie Le Pen appeared on their television screens. Le Pen, the leader of the Front National, had eliminated socialist Prime Minister Lionel Jospin from the second round of the presidential elections. Huge demonstrations followed, and left voters mobilized to bar Le Pen’s way to the presidency by electing Jacques Chirac. Still, since then, the influence of the Front National has been steady, if not growing, in all local and national French elections.

This growing popularity has been enhanced by Jean-Marie’s transfer of leadership to his own daughter. “Marine,” as her supporters call her, has striven to redecorate her father’s little shop in brighter colors, re-baptizing it “le Parti Bleu Marine” and brushing away under the carpet the most unpalatable aspects of Jean-Marie’s ideology, such as allusions to Nazi gas chambers as “small details of history.”

What’s more, while firmly clinging to anti-immigrant discourse, Marine has developed ideas which, in their times, the French Communist Party or even Socialist Party might have claimed. She speaks of social injustice. She denounces rising unemployment brought about by globalization and by EU regulations facilitating competition with foreign workers.

Notably, Marine did not take part in the demonstrations organized in 2014 by the Manif’ Pour Tous, a congregation of the most reactionary, traditionalist Catholic parts of the population united in opposition to gay marriage. In fact, the Front National is deeply divided between those who argue for economic protectionism and a certain amount of freedom in the area of individual rights—regarding abortion and gay marriage—and those who advocate economic liberalism but are crusading against those rights.

Marion Maréchal-Le Pen, Marine’s niece and the youngest member of the dynasty engendered by Jean-Marie, is one of those hardcore traditionalists. At the age of twenty-seven, Marion has been a member of Parliament for five years. A year ago, in December 2015, she almost won the election to govern one of the largest French regions, Provence-Alpes-Côte d’Azur. Once again, left voters had to support a right-wing candidate in order to stop the Front National.

The ideological conflict between Marine (with Florian Philippot, who was outed as gay in 2014, as political advisor) and her niece Marion was given a new impetus by the emergence of François Fillon as the candidate of mainstream rightist Les Républicains in the party’s primary elections last month. This was the first time that the party had ever organized such a primary, and its leader, ex-President Sarkozy, was eliminated in the result. Fillon was the unexpected third choice of the French electorate, among them a portion of left voters determined to banish Sarkozy from the political arena.

Fillon is Sarkozy’s very conservative, openly Catholic ex-Prime Minister, a man whom Sarkozy once contemptuously publicly called his “collaborator.” He is a problem for the Front National, as he is almost as reactionary as Marion Maréchal-Le Pen in the field of individual rights—he, too, is supported by La Manif’ Pour Tous—but economically liberal. On the other hand, his attacks against the welfare system have allowed Marine Le Pen and Florian Philippot to denounce a planned destruction of the French welfare system, thus addressing the concerns of working-class voters.

The left in France has abandoned these voters, the most negligent faction being the Parti Socialiste. Its think tank, Terra Nova, once explicitly advised party leaders to stop trying to attract the working class and to pull all the party’s efforts towards the educated, urban, liberal upper-middle-class, those who for a decade have been called the “bobos”—for “bourgeois-bohemians.”

François Hollande was elected in 2012 on promises to curb unemployment, to fight social injustice, and to oppose what he declared to be his main enemy: the world of finance. He reneged a few months after assuming power. Pleading for the end of austerity in the EU, he promoted an €40 million pro-business program. What’s more, after nearly three hundred people died in the terrorist attacks that occurred between January 2015 and July 2016, Hollande deeply divided his own supporters by proposing to deprive terrorists of their citizenship, even those who were French nationals.

Hollande’s popularity declined to a historical low point, and on 1 December the President announced he would not run for re-election. This was a first in the history of the Fifth Republic. Since then, his Prime Minister Manuel Valls has stepped down from office to run in the primaries organized by the PS (Parti Socialiste). The Barcelona-born Valls, described as authoritarian and rigid on matters of public secularism (France’s famous “laïcité”) still has to contend with other former members of Hollande’s government.

And in the meantime, two outsiders have adamantly refused to take part in the primaries of the left-wing parties: Jean-Luc Mélanchon, the leader of the Front de Gauche, now re-baptized La France Insoumise (France Undefeated). Once beaten by Marine Le Pen in a local election, he is often accused of resorting to populist rhetoric. The other outsider, Emmanuel Macron, is a thirty-seven-year-old former Rothschild banker. Hollande appointed him Minister of the Economy but, Brutus-like, he is now running against his own side.

The ordinary left voter is thus confronted with several choices, none of which is any choice at all. The left’s primaries, coming up at the end of January, will feature opponents who are drawn from Hollande’s ranks and are unlikely to attract wide support from either the left or the general public.

In these primaries, the votes after the first round might very well be split more or less evenly between Mélanchon, Macron, and the socialist candidate, thus depriving the left-wing parties of a candidate for the second round. Left voters might then in the end have to decide either to endorse Fillon, a liberal who admires Margaret Thatcher and once declared that he was personally opposed to abortion, or to let Marine Le Pen win, pushed towards the extreme right by her twenty-seven-year-old radical niece and her allies.

But the real campaign has not started yet. The French elections, like those in other parts of the world, may still take a completely unexpected turn.