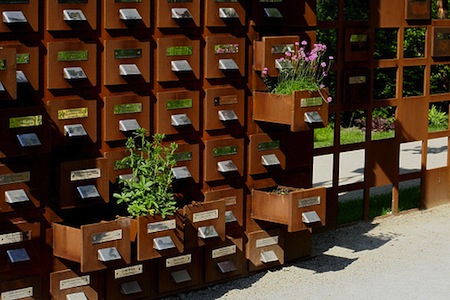 A friend of Occupy recently passed away: Michael Nash, head of the Tamiment Library and Robert F. Wagner Labor Archives at NYU. I had only a passing personal acquaintance with Michael, but this is not untypical of the ways we Occupiers interact, and our group thought we should visit his wonderful family at shiva. Michael was a very generous man, and at least one facet of Occupy, the People’s Think Tank, would not have existed without his support – which was why, despite our only passing acquaintance, I knew Michael was a generous man. If Occupy is the actions we perform, and if the institutions we build are the enablers of those actions, then our continuing action not have happened without advice and logistical support from Michael and his coworkers at the Tamiment Library. Thus, he will always mean something to us, and something truly special – he played a role in the construction of something we thought was beautiful, and unlike anything most of us have experienced in our lifetimes. For that we are truly grateful and wish him peaceful rest.

The Labor Archives now contain a record of the series of conversations the Think Tank facilitated throughout the course of the Occupation of Liberty Plaza and afterward, recorded on devices the Tamiment provided. Lately there is talk (as there often is) of a Reoccupation, but I hope that this does not happen. The talk, and the space we once claimed, and the records Michael helped us maintain, brought up interesting questions. After I visited his family, I had to give a walking tour for a class I teach on American social theory and art. I walked south from the housing complex run by NYU for its employees to Artists Space, a nonprofit arts space, founded in the early seventies, that spawned what scholars now call “The Pictures Generation,” among whose members were counted Cindy Sherman, Richard Prince, and Sherrie Levine.

I planned to give my students a three-hour tour that would lead from the space’s current location, through Washington Square Park, up to Jefferson Market and Christopher Street, down to Hudson Street, and to the High Line; the theme of the day’s class had to do with urban planning and the history of radical New York from the sixties to the eighties. I had not really been thinking about how to approach the difficult problem of the peculiar historicity of the city before leaving Michael’s family. Naturally the thought of Michael’s death and what he meant to his family preoccupied me, but it did not prevent my considering the problem at hand. Although my original plan was to discuss the debates between communitarians like Jane Jacobs and grand planners like Robert Moses, it occurred to me while walking that many of the places I would be visiting – the Stonewall Inn, the former site of Cedar Tavern, and even Artists Space itself – were not in their original locations, and that almost every one of my sites for the day had completely altered their original function. The historicity of city’s space and of these kinds of institutions were both anchor points for a brief reflection on the archives of our discussions, and of Occupy.

The word that will naturally come to mind for many people who consider the new Stonewall or the new Cedar Tavern is “simulacrum,” and although our post-Deleuzian philosophical universe has room for these peculiar things now, something of the original moral weight of the term persists. In Reagan’s eighties, the Baudrillardian impulse of the artists of the Pictures Generation outweighed anything good we might have had to say about simulacra, and I can’t imagine most of us don’t think things have gotten worse. But if Occupation was our answer, a Reoccupation would be nothing more than this kind of weak simulacrum, and bloodier. We would show what, exactly? And we would meet with more police repression than before, but with less public support. If an attempt simply to begin again as if we could recover our memories of a hopeful past is mistaken, the question then arises, why praise the act of archiving our work? I praise Michael for his entirely human gift – he gave us an enormous amount of help and asked nothing in return. But it is up to us to figure out what there really is in those archives.

We cannot, as many Occupiers are prone to do, pretend that the situation of our movement is the same as it was before. We have shown the true face of the corporate state, but we have also shown the weariness of the public that lives under it. Much of the information deposited at the archive will at least remind us that we were once capable of engaging in large-scale horizontal conversations on meaningful issues in public space. But space is a malleable thing, and our environment has changed.

We have to find other ways to achieve the goals that led us to Liberty Plaza. There was a wonderful statement in our doing that – we showed, at least to those people whose minds had not been deadened by an irresponsible corporate media and forty-odd years of reactionary propaganda (the two things were not always different) that the public could come together and engage in civil discussion of common goals. Thanks to Michael and the Tamiment, we have some proof of that. But the act of Reoccupying public space in large part misses the original point, because it overlooks the factors militating against our repeating, in anything but surface appearance, what we first accomplished. It misses the point of the action, and is at most a publicity play, not much better than reopening Stonewall. Current conditions – an increasingly repressive police and a public that is becoming less and less impressed with individual actions – will make Reoccupying mainly a matter of holding our ground, which will, in turn, demand of us that we forego most of what made the original Occupation a serious thing in the first place. In order to defend our occupation of the space, we will need a continuous flow of people to replace each wave of arrestees, and there is very little indication that we have the numbers to do this. Even if we did, no group of replacements will be able to stand ground long enough to set up anything lasting – no library, no kitchen, no medical, no info booth, nothing. It’s not worth it unless we get sustained public support, which we won’t. The only way we could do this would require a different public altogether, which was something we were in the process of building beforehand. It would also require a better understanding of ourselves, one that builds on what we made before, rather than dreaming that the same actions we undertook before will meet the same response they once got.

The archive has enabled something like this. It has allowed us to have a form that is not binding, like a constitution but without the trappings of legality. The difference lies in the way we choose to relate ourselves to our own past. Something more urban in its consistency, drawn from the model of the city, a remnant of a previous form of life whose shell may be adapted to new purposes. The patterns of thought recorded in the archive may inform our present situation, as they are a real part of it – something that functions as a node within the set of actions constituting the present set of problems we face and whose envisioned solutions define us as agents, but not a holistic model that can be repeated en toto. Seeing the difference rests in large part on decisions to let go certain features of our past that we cannot reclaim. Any present action depends on a dissolving past. We are either going to attempt to resurrect the spirit of the original Occupation, dreamily, in the form of a collective action, but without the infrastructure that enabled the first one to last. Or we are going to stand on the set of ideas collected during that first experience, and select those that are appropriate to the present circumstance, and make a real attempt to move forward.

Evan Neely lives three mostly separate lives. He is a postdoctoral fellow at Columbia University and a Visiting Assistant Professor at Pratt Institute, where he teaches classes in political theory and art history. His work focuses on the relations between expressive interaction, communications technology, and the organization of labor in the 19th and 20th century United States. He also has a career as an illustrator, under a pseudonym, and Occupies Wall Street in the intervening hours.