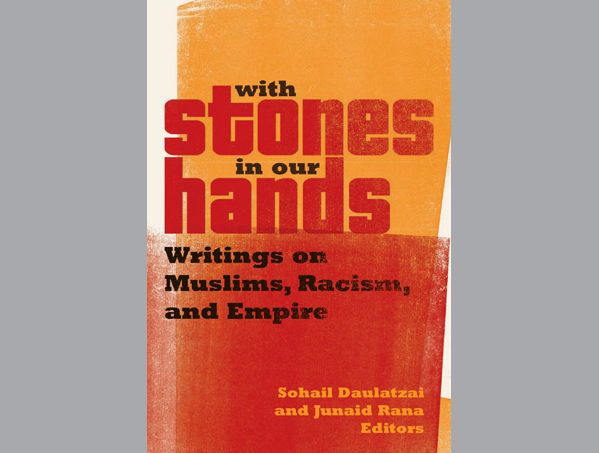 With Stones In Our Hands: Writings on Muslims, Racism, and Empire, edited by Sohail Daulatzai and Junaid Rana, is an ambitious collection of essays that draws important connections between the perceptions of Islam in the twenty-first century and the enduring racism of global empires. The range of topics explored is certainly varied, from the United States’ complicity in Israeli violence against Palestinians to representations of Muslims in popular film and television. Contemporary concerns, such as the increased monitoring of American Muslim youth activists in public and private spaces, or the growing animosity towards European Muslims after Charlie Hebdo, are cleverly viewed through the lens of global imperialism and racism.

This collection attempts to resist global anti-Muslim sentiment. Islamophobia as a term is challenged by the editors, who argue that it does not acknowledge the racial elements, and instead “dovetails with the rhetoric of color-blindness and the post-racial” which results in ignoring “the systematic and institutionalized forms of racial violence that target Muslim bodies” (xviii). Indeed, the collection constructs both a radical and global Islamic perspective while maintaining an awareness of the intersectionality of race, gender, political loyalties, wealth, and nationality. This marks the insightful collection as distinct from the simplistic voices of politicians and the mainstream, right-wing media.

It is expected that, due to the sheer amount of ground this collection covers, every reader will take away something different from their reading. For this reviewer, something that stood out was the collection’s impressive ability to look beyond a post-9/11 approach towards Muslims and to instead adopt an underexplored historical approach toward contemporary issues. They show, ultimately, that these problems have enduring historical roots.

Fatima El-Tayeb offers a deft criticism of European multiculturalism in her chapter “Oppressed Majority.” She identifies Europe as a continent that struggles to acknowledge its history and reality as “multiracial and multireligious” (86). Markers of difference such as dark skin and headscarves, she argues, are not understood to be expected in a multicultural nation. Instead, they are seen as contributing to a post-multicultural reality that is approached as “a novelty that requires adjustment in the best case and resistance in the worst” (87). Difference is abnormal, even threatening, and nothing is seen as more threatening that the “internal” and “global threat” of the world’s Muslims. As many authors in this collection note, Islamophobia is not necessarily the right way to define this anti-Muslim sentiment. It is not simply Islam that is demonized, but racial minorities. El-Tayeb argues that there is, unfairly, “an ongoing perception of racialized Europeans as outsiders who need to integrate into a culture to which they have contributed nothing” (94). Anti-Muslim sentiment, therefore, is deeply entwined with an ignorance of the historical contribution of Muslims to the Western world and with ongoing and exclusionary racial hierarchies.

Vivek Bald’s “The Only Good Muslim” draws on Mahmood Mamdani’s seminal theorization of the “good Muslim” and the “bad Muslim.” Bald explains that the contemporary differentiation between the Muslim that can be trusted and the one that cannot (noticeable in the post-9/11 climate) is actually an attitude that originated much earlier. Muslims and South Asians, he argues, are only accepted by America if they can “unequivocally prove their loyalty to the nation” (137). Bald tells the story of Ranji Smile, an Indian chef who was brought to New York in 1899 to be the poster boy for an “exotic” Indian restaurant. Struggling with US laws that prohibited immigration from Asia, the restaurant’s founders Roland and Stanley Conklin brought Smile back to the US as an Indian prince, at once bypassing US anti-immigration laws while also appealing to “Western fantasies about the wealthy and mysterious princes of the East” (140). South Asian Muslims, Bald shows, were “desirable to the extent that they confirmed, performed, and delivered upon Western colonial understandings of certain types of mysterious and exotic ‘Orientals’” (italics in original, 141). This distinction between the desirable Muslim and the undesirable Muslim (who does not adhere to supposed “Western” values or is not seen as well-educated, for example) exposes the hypocrisy of the so-called “age of immigration” where migrants were supposedly welcomed into the open arms of a pluralist, hospitable America (146). This history, Bald shows, still feeds into perceptions of racialized Muslim subjects today.

The essays in this collection are so different that there is a risk of a lack of cohesion. This is an eclectic and varied collection in which each essay could be the beginning of a book in itself. But a reader will be left with new knowledge and a more global understanding of the connections between global empires, Islam, and the history of racism. What really connects the essays in this collection is the authors’ passion for the subject alongside the academic rigor of the content.

A “timely invigoration of solidarity politics” (ix), this collection calls on current and recent affairs to construct an intelligent response to the anti-Muslim sentiment borne out of European and North American hegemony. Through this scholarly activism, the authors “dissent against the normalization of our anti-Muslim present” (x). While some of the essays are theoretically dense and make a challenging read, many of the others are highly comprehensible and would appeal to a broad range of readers. This collection should appeal to inspired students, experienced academics, and dedicated activists.

Dr. Hannah Kershaw was awarded her ESRC-funded PhD entitled History, Memory, and Multiculturalism: Representations of Muslims in Contemporary British Fiction from the University of York in 2018, and she has published in Wasafiri, Journal of British Studies, Critical Muslim, and Gender Forum. She also holds an MA in colonial and postcolonial literature and culture. She is based in London and currently works in research management in a large heritage organization.