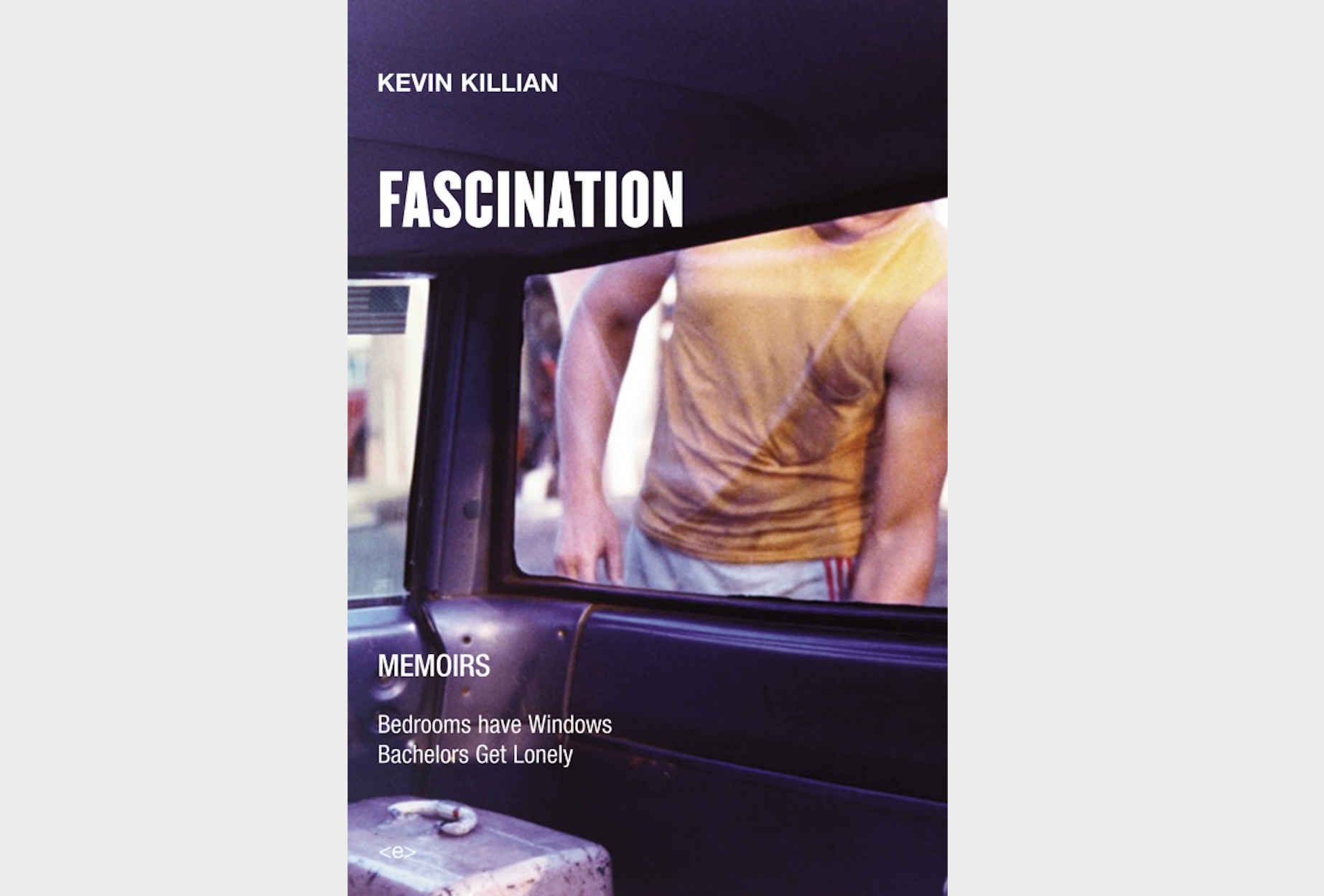 It’s something of a relief, when, late in Fascination, Kevin Killian reflects on the cruelty of the youthful romances that he’s been narrating: “…as I look back I see that I had a ruthless streak; I could be horrifyingly manipulative” (249). Of course, in real life Kevin was known for his open-heartedness and generosity. After his untimely death last summer, there was a flood of remembrances, all commemorating his kindness. I had a few lucky chances to spend time with him and experience his kindness too, for which I’m grateful. Kevin treated me like a real writer long before I deserved it; he was selflessly curious about what younger poets were doing, out of a contagious enthusiasm for people and culture. A wonderful person, a beautiful spirit.

So in the context of our collective memorializing over the past months, reading Fascination now is a perverse delight because it breaks with one’s image of Kevin; though the first-person narrators share his sympathetic and chatty voice, they also often revel in malice and negative affect. The book, edited by Andrew Durbin and published in 2019 by Semiotext(e), is a compendium of three works—Bedrooms Have Windows, Bachelors Get Lonely, and Triangles in the Sand—written decades apart but all concerned with gay life in Long Island and New York City in the 70s and 80s. In each book, the narrator (always a character named Kevin who is suggestive of but not identical to the author) navigates love and pain, sometimes getting his heart broken, sometimes getting used by older men, and sometimes badly hurting others: in one scene, he tricks a boy into sleeping with him to amuse an older lover; in another, he cynically offers a boy for sex to bribe his landlord’s son.

I don’t think I’m unduly or fetishistically focusing on moments of emotional and physical violence because Fascination, as a whole, is pervaded by interpersonal ugliness. Moreover, mingling representations of sex and violence was part of a communal aesthetics: New Narrative writers were taking inspiration from the work of their friends like Kathy Acker and Dennis Cooper, whose writing married formal experimentation with self-consciously excessive content. Such work was, of course, an attack on hypocritical straight mores (which find perversity everywhere but in the violence they legitimate), as well as a giddy affirmation of the destabilizing power of fantasy, however antisocial it might be.

This aesthetic also served as a reflection of oppressive social structures, as a vehicle for a simultaneous critique and celebration of a sensationalized media, and as a strategy for writing through the link between sex and trauma without submitting one to the other. But regardless of the seriousness of purpose, in Killian’s work (as in Acker’s, Cooper’s, and Dodie Bellamy’s), intentionally unconscionable scenes are written with a palpable pleasure: one gets the sense that the author is enjoying the spectacle of cruelty and hopes the reader will enjoy it as well.

In one scene (not the darkest but perhaps the bloodiest) in Bachelors Get Lonely, the narrator drunkenly follows a stranger named Scott to a by-the-hour motel, where he’s asked to tie to him up in a mirrored shower. But as soon as Scott is strapped to the shower rod, it breaks, cracking the mirrors and sending shards of glass down on them. Scott lays on the bathroom floor, bleeding and impaled, while Kevin, stunned but unhurt, contemplates his body and jerks him off:

I studied it before I began to pump: it looked angry, swollen, as though stung by bees. Blood and pre-cum, greasy in my loose fist. The aroma of blood: stale, tangy, older than either of us. Scott stirred, smiling, moved his head across the wet shiny tile. Gently I placed the pink satin pillow between his head and the floor; its black lace ruffle grew instantly darker with blood and water. “This is like some Mario Bava film!” I thought, scared to death, but horny, too. Scott’s dark blue eyes fixed on some point in the mirrored wall, from which another face gazed back at him, mine or his. His tongue protruded from his mouth, like a dog in summer lapping up water. “Cool,” he said.

Scott’s deadpan “Cool” deflates the violence with an affective blankness that’s reminiscent of Dennis Cooper’s books, or the films of John Waters or Gregg Araki. Along with the narrator’s exclamatory comparison of his situation to a Mario Bava film, it signals an aestheticized distance to the grisliness of the scene. This distance creates an intellectual remove, allowing the subtly but comically overdone literary techniques (such as the metaphors—“as though stung by bees,” “like a dog in summer lapping up water”), to serve less as description and more as ornamentation: in a book that presents itself mostly as memoir, this scene’s playful excess removes the action from the frame of “reality” and transfers it to the realm of fantasy, like a titillating horror movie.

Fascination is not saturated with such violence, but the title is apt: there’s an undercurrent of fascination with negativity running throughout the book. There are also, to be sure, many moments of tenderness and connection (including in the above scene with Scott): friends hang out, strangers hook up, lovers lean on each other. Sometimes, as when Kevin writes about his partner Dodie Bellamy, his irony and ambivalence fall away and the writing becomes straightforwardly heartfelt, as in this explanation of how they got together: “What happened is I fell in love with her, I know it’s odd and everyone said it wouldn’t last, not to my face of course” (217). It did last, as the reader knows, and it’s the one relationship in the book that’s treated with unabashed reverence and gratitude. Such earnest passages are all the more touching because they’re brief and in tension with bleaker elements: the sentimentality is sharpened against the darkness—almost too clear, too felt, like the emotions in pop songs or soap operas (two of Kevin’s favorite cultural forms).

There’s a recurrent discussion among writers and academics about why New Narrative isn’t as widely canonized or studied as Language Poetry, a contemporaneous Bay Area literary tendency that pitted disjunction against transparent meaning. The causes are surely multiple (prudishness and homophobia in academia undoubtedly being at the top of the list) but I think one reason for the imbalance in reception is that New Narrative writers didn’t tend to frame their work in terms of a common—or rational—Good.

Language Poetry’s many (often invigorating) kaleidoscopic experiments with the fragment are difficult reading by any normative measure, but much of the theoretical writing produced by its practitioners argues for the political and moral worth of the work. Part of what made Language Poetry interesting was its project of wrapping formal intractability in Marxist theory. New Narrative, however, kind of did the opposite: its authors wrote about politics directly without framing their work as a political Good, and reveled in including content that deliberately undermined moral positions—both the moral positions of reactionary conservatives, in the context of 80s culture wars, and the moral positions of the Left, which could also be exclusionary and straight.

In this spirit, Fascination certainly gleans from cultural studies and high theory, but it borrows even more from “low” genres like pornography and horror—not in the service of mere referential pastiche, but because these genres do not derive their justification externally. Their relevance, and their effect, is not determined by the same modes of commentary and discourse that legitimates more socially esteemed art forms. (For example, critical reception was entirely irrelevant to Kevin’s beloved Dario Argento films—or, to use more recent examples that haven’t yet been recovered as classics, we might think of the Saw or Paranormal Activity franchises. Such films do not depend on critical approval, either financially or aesthetically.)

New Narrative played with genre, but it doesn’t resemble genre writing; it’s too high-minded and self-consciously avant-garde. Nonetheless, it shares genre’s disinterest in status and institutional legitimacy. Perhaps this springs from the gay left politics of the time that the authors were engaged with: first, as an insistence that liberation and equality should not depend on goodness or moral worth; second, as a joyful recognition that all sex is perverse and discordant. Moreover, perhaps New Narrative writers saw genres such as pornography and horror as cultural reservoirs of Bataillean excess, communal wells of exorbitant energy to be tapped for the expression of emotions and experiences that are not clearly defined.

The last book in Fascination, Triangles in the Sand, is a short account of Kevin’s friendship with the musician Arthur Russell in the 80s. Clearly written later than the previous two books, it’s more bittersweet and reflective. It opens with the passage I quoted at the beginning, an apologetic meditation on the author’s supposed mean streak. My squeamish side found this part to be a relief, a reassurance that the kind and gentle person behind the book was present in the text and could recognize and contextualize the preceding cruelty. But my impish side was relieved when this contrite opening turned out to be unrepresentative; by the end, Triangles in the Sand is just as raw as its predecessors and remains as fascinated with the bitterness of disconnection as with the sweetness of connection.

The main storyline is simple: Russell and the narrator become friends, they share some nice time together, bonding over disco, silly jokes, and one half-hearted sexual experience, but it’s never completely clear whether they really like each other, and eventually they simply drift apart, a bit bored and irritated. This narrative is interwoven with a story of a different failed relationship, one which is perhaps more deeply felt but which ends on a particularly ugly note. After gaining the reader’s sympathy, the narrator’s final actions toward a boyfriend who trusts him are upsetting, even as they’re ambiguously played for comedy.

It becomes clear that the narrator’s self-reflection is not a plea for literary or personal redemption. In the last scene, the present-day Kevin belatedly learns about Russell’s death when reading a music magazine, and though he hasn’t thought of him in decades, it hits hard. Remembering, with embarrassment, being turned off by Russell’s acne, Kevin scrapes his fingernails across his face, as if performing a haphazard ritual to conjure the apparition of his dead friend. This mournful ending is a heartbreaking and suitably melodramatic expression for a lost friendship, even one that was brief and marred by regretful words. Friendship, as with genre literature and experimental writing, is not justified externally—it doesn’t need to be consistently good, or to last. That said, Fascination is a very good book, and Kevin was a very good person, and I wish he were still alive.

Steven Zultanski is the author of several books of poetry, most recently Honestly and On the Literary Means of Representing the Powerful as Powerless. A new pamphlet, Thirty-Odd Functions of Voice in the Poetry of Alice Notley, is just out from Ugly Duckling Presse. He lives in Copenhagen. 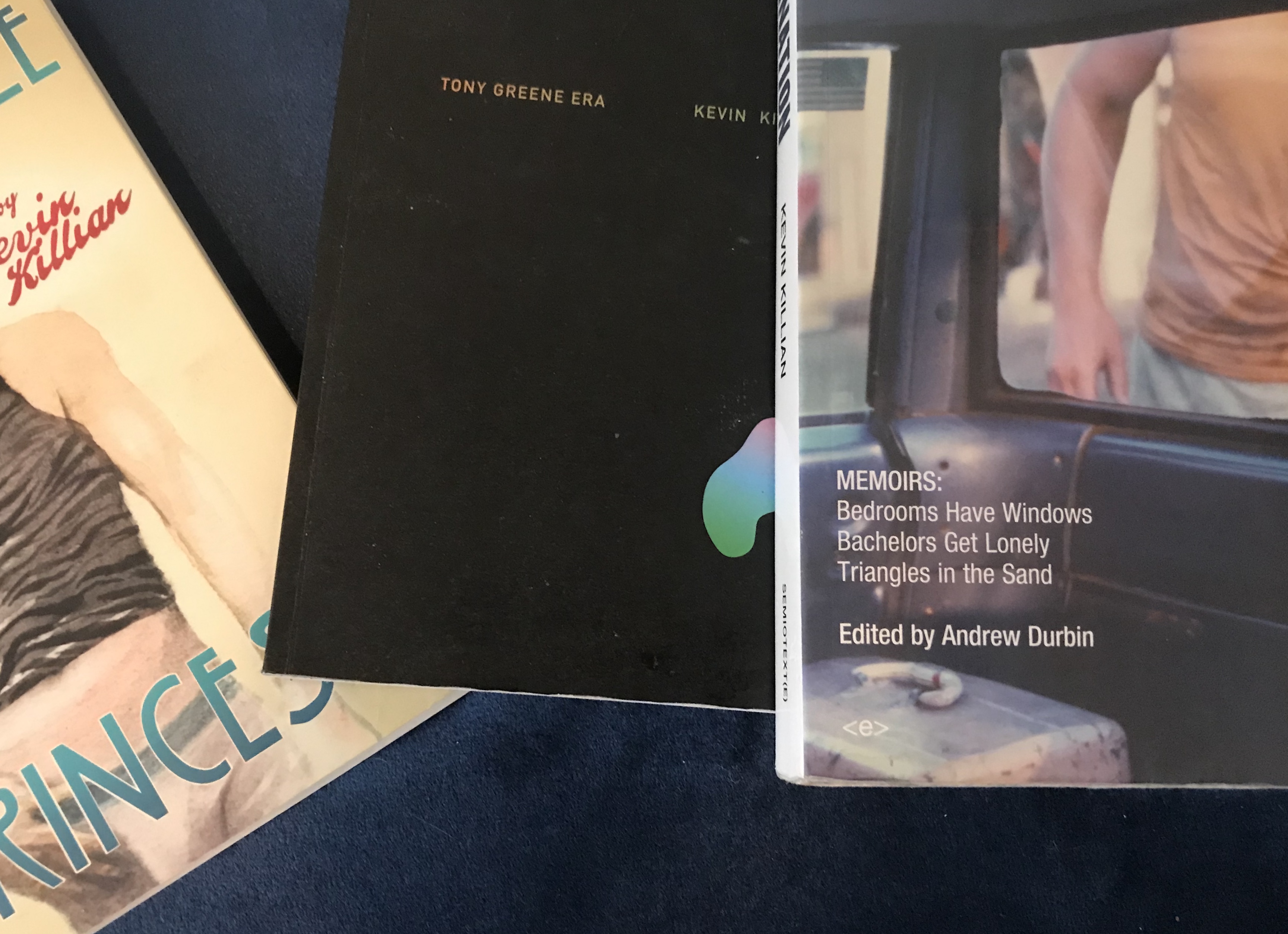