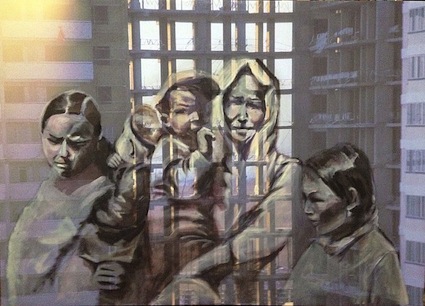 In locales where the resources are scarce and the imperial-colonial configurations more complicated than in the West-East or North-South dichotomies, the politics of physical survival and the politics of servility towards the criminal state unfortunately dominate. There are no recipes against this, other than delinking and disobeying. And most of decolonial artists in this situation and in such spaces are confined to the position of subversive tricksters and negotiators, creating, little by little, a decolonial transmodern “community of sense,” to paraphrase J. Ranciere, 2009.
This is the case with the art practices of Eurasian borderlands and particularly such post-Soviet-colonial locales as the Caucasus and Central Asia. They are marked by multiple forms of coloniality, a wider spectrum of Western, not-quite-Western and non-Western native influences, and a restless shift from the position of the forced Second World to the Global South today. This leads to a specific nonbelonging of Eurasian artists — their initially wider interpretative horizon and their trickster flexibility, which does not save them from appropriation by the market or the state, neo-orientalizing in the West and in Russia–and a confinement to intuitive decolonial moves that are only starting to be theorized in public art discourse.

If decolonial phenomenology deals with the Duboisean question of what it means to be a problem, decolonial aestheSis, linking reason and imagination through epistemology, focuses not on Caliban’s reason but on Caliban’s art, and not on decorative and ornamental art (which before was the only kind of creativity allowed for Calibans), but а full-fledged art that is quickly becoming an important part of the contemporary, socially and politically engaged art scene. When Caliban turns from an object, a decoration highlighting the sublime of nature, into a subject with his own agency and aestheSis, the usual connection between the beautiful, the sublime, and the particular phenomena, actions, and events signifying them, takes a different meaning–an object acquires a voice, and an ability to suffer, to experience humiliation, and eventually to build an alternative world out of this misery and tenacity, and to react to this experience through aesthetic means. Decolonial art focuses on demonstrating the underside of the Western beautiful and sublime and gives subjectivity and creativity back to Calibans. According to the tenth-century Arab geographer and historian al-Mas’udi, the Caucasus is a mountain of tongues (Shboul 1979); in our case, these are artistic languages and sensibilities that differ ethnically, religiously, linguistically, and cosmologically, yet retain some non-verbalizable pan-Caucasian community of sense. We should not lump together the post-Soviet, independent, South Caucasus states such as Azerbaijan, Georgia, and Armenia, with the remaining Russian colonies of the Northern Caucasus. Their decolonial impulses are predictably different, grounded in different local histories, imperial-colonial configurations, and independent or confederative futures. A Georgian artist Iliko Zautashvili strives to decolonize perception from stereotypes in such controversial projects as Caucasian Manifesto (2008), attempting to demystify the exoticist image of the Caucasus as well as the mythic, holistic, patriarchal, positive self-representation. Azeri artists offer their own decolonial transcultural models that question and destabilize various modernities imposed onto the Azeri liquid shifting identity, always mocking and finding its trickster ways beyond and across, such as Babi Badalov’s multilingual visual poetry mixing Latin and Cyrillic alphabets, or Orhan Guseynov’s ironic work Non-Standard (2006) in which we see a traditional Azeri cornbread Churek stuck halfway into an electric toaster where it obviously does not fit. A Daghestani, Magomed Dibirov’s SOUP (2006) falls in the same category: it depicts the artist’s niece in a way that is opposite to the standard, ear-to-ear smiling and oozing happiness, of pop-art children. With clear hatred she is looking at a big plate of Andy Warhol’s replica of the mass-produced tomato soup, which this Daghestani kid refuses to eat.
As P. R. Gamzatova points out, the Southern Caucasus and Central Asia are in a more favorable position than the Northern Caucasus because today they can shape different vectors of influence and build on dialogic connections with Europe and with the wider Muslim world, which the remaining Russian colonies are lacking (Gamzatova 2009). Yet there are decolonial impulses in the works of the Northern Caucasus artists. An interesting example is Daghestan where several dozen ethnicities, each with its own language and identity, coexist. This republic remains a part of the contemporary Russian Federation whose control is enacted in the form of familiar, post-Soviet, ethnic statism, fused with criminal groups from the center.
Magomed Dibirov (Dibirov 2012) mentioned above was born and has lived all his life in Khasavyurt, an iconic town in the contemporary history of the Caucasus and Russia, at the border of Chechnya and Dagestan. A peculiar border sensibility emerges from a straightforward metaphor in his provocative A Member of the Federation, a post-Sots-art image of Russia as a smooth brick wall, one of whose bricks–Dagestan–is defective. The idea of the deprivation of human rights, dignity, and even human rank in Dibirov’s work acquires additional salience in relation to the ubiquitous ethics of quite real war in the contemporary Caucasus. His alarming canvas Temporary Truce presents a hyperrealistic meat grinder standing head over heels on a table. Next to it lies a lonely miserable tomato, which the artist identifies with. The tomato “knows” that the truce is temporary and its time will come very soon. Dibirov could not avoid the Muslim theme, which he treats again in the ambivalent way of a border-dweller. In Security Service, for example, he contemplates the boundaries of Western tolerance and the conditions of the multicultural integration of Muslims into modern Western societies. Modernity here looms behind a beautiful ornamented arch: an entrance into the wonderful world, represented, or maybe guarded, by an unexpected materialized idiom, a gigantic safety razor. An out-of-scale, smallish figure of a traditionally dressed and bearded Muslim man stands in front of this arch not daring to enter, not sure if the razor would shave off his beard (a symbol of Muslim identity) to let him in, or if much more is to be sacrificed.
Taus Makhacheva, a diasporic artist with Russian citizenship, Western education, and Daghestani (Northern Caucasus) ethnic roots, has had her work exhibited in Russia, Europe, the postsocialist countries, and most recently at the Liverpool Biennial (2012), for which I prepared a catalogue entry. She questions the processes of integration, discrimination, and representation that have failed to provide adequate answers under the concept of Affirmative Action. It is destabilized in her skeptical work based on her own experience as an “other” in Moscow and in London (Makhacheva 2011). A playful “trying on” of alien roles does not rule out her remaining a part of the symbolic reality she is investigating, comprehending its inner logic, even if passed through a prism of the global cosmopolitan experience of a sophisticated contemporary artist.
In her video-filmed performances, the artist examines the unstable boundary between the same and the other, acceptance and rejection, drawing attention to our efforts to merge, mimic, assimilate, or leak into the other, no matter if it is another person or a community–natural or social, rural or urban, real or imagined. Makhacheva acts a participatory anthropologist-cum-artist striving to understand the contemporary social and political reality of Daghestan without exploiting or objectifying her own culture.
In her most recent video, Gamsutl (2012), she questions various masculine appropriations of space, and ways of communicating with the natural, the manmade, the animal, the machine, the human, the social, and the historical. Acquiring one’s masculinity anew through rediscovering and reliving space and going back to spatiality through gendered forms of identification, is crucial in contemporary culture. The frozen time of globalization, with its only remaining horizon of consumption and its end-of-history sensibility, makes people turn to forgotten spaces (local and global), spatial histories, and glocal identities, to various ways of possibly re-rooting in new topi–real as much as imagined and constructed.

Gamsutl is an abandoned and collapsing, hard-to-reach, ancient, human settlement carved in and from the rocks of Avarain mountain, situated along one of the offshoots of the Great Silk Road, and once famous for its skillful jewelers and armorers, as well as its religious and cultural tolerance. Its picturesque ruins are not grim, as they grow into the wild landscape, harmoniously blending with the environment, as if it is time for nature to claim its eternal rocks back from the people. The protagonist is a young man taking part in a peculiar ritual of re-membering and reenactment, and striving to carefully recreate the spatial memory of the forgotten past. Through a bodily “merging” with this space–a palimpsest of many cultural strata and dramatic historical events (the Russo-Caucasus War, Soviet modernity, the post-Soviet abandonment and return back to nature)–the “dancer” is trying to corporeally relive Gamsutl in his mimicry of natural and architectural objects. Some of his moves recreate the characters of panoramic paintings by a Russian military orientalist, Franz Roubaud (1856-1928), who was known for his series of Caucasus War canvases depicting the area surrounding Gamsutl and the soldiers of both warring parties. The dancer is trying on various identities, imagining himself alternately a defender and an assaulter, a warrior and Gamsutl’s citizen, a collective farmer and a brigade leader, incorporating Soviet modernity symbols into his traditional dance and mimicking inanimate objects–becoming a tombstone, a watchtower, a crack in the wall.
In Delinking (2011) the artist plays on this decolonial term. She was attracted to the idea of delinking from European thinking and ways of receiving knowledge, and this work emphasizes the fact that all cultures have their own different systems and practices of transmitting knowledge, of cultural and intellectual evolution, while the world uses only the sanctified Western academic system. Makhacheva’s face was intricately painted with henna using Indian, African, and Middle Eastern ornaments. As soon as her face was covered with ornaments, the spaces where skin was still visible were filled with more inscriptions until the whole visage was coated with green. After it dried and was washed off, the face changed its color to an orange-brown and stayed so for a week–a new mask, a new mocking identity–tentative, yet obviously leaving a trace. The changing face color as a space for the pluritopic overlay of different epistemic and aesthetic systems became a complex metaphor for decolonial shifting of the geography of reasoning and recreating a decolonial community of sense.
References
Atabekov, Said. 2009. Son of the East. Solo Exhibition. Laura Bulian Gallery. Milano. http://www.laurabuliangallery.com/index.html.  Last accessed 09.02.2012
Atabekov, Said. 2011. Mixed Language.  Lingua Franca. Central Asia Pavilion. 54th International Art Exhibition La Biennale di Venezia. http://www.cap2011.net/artistsaid2.htm. Last accessed 09.02.2012.
Dibirov, Magomed. Web-page at the Official Site of the First Gallery, Makhachkala.  http://www.dagestan-art.ru/?dr=data/1306406232/1306957959&im=1309375118. Last accessed 02.08.2012.
Gamzatova, Patimat R. 2009. “Aktualniye Problemy Iskusstva v Musulmanskom Areale Stran SNG v nachale 21 veka” [Topical problems of art in the Muslim area of CIS countries in the early 21st century], pp. 56-67, in Iskusstvo Turkskogo Mira. Istoki i Evolutsija Khudozhestvennoi Kulturi Turkskikh Narodov [The art of the Turkic World. Sources and evolution of the artistic culture of the Turkic people]. A Collection of Essays, ed. P. Sultanova, Kazan.
Ibraeva, Valeria. 2007. Erbossyn Meldibekov. 2007. Nafas Art Magazine. http://universes-in-universe.org/eng/nafas/articles/2007/yerbossyn_meldibekov/photos/. Last accessed 09.02.2012
Khankhalayev Gallery. 2012. http://www.khankhalaev.com/. Last accessed 09.02.2012
Makhacheva, Taus. Affirmative Action (Mimesis). 2011. Laura Bulian Gallery. Milano. http://www.laurabuliangallery.com/index.html. Last accessed 09.02.2012.
Ranciere, Jacque. 2009. “Contemporary Art and the Politics of Aesthetics,” 31-50, in Communities of Sense. Rethinking Aesthetics and Politics. Durham and London: Duke University Press.
Shboul, Ahmad A. M.  1979.  Al-Mas’udi and His World. London: Ithaca Press
.
Sorokina, Julia. 2006. Vyacheslav Akhunov. Nafas Art Magazine. http://universes-in-universe.org/eng/nafas/articles/2006/akhunov/. Last accessed 09.02.2012.
Suleymenova, Saule. 2010. e-mail interview with Madina Tlostanova. 05.11.10.
Saule Sulemenova: I am Kazakh. 2010. http://www.youtube.com/watch?v=MiaTic0Iwgc
Useinov, Vyacheslav. 2011. http://www.useinov.sk.uz/art_news.html. Last accessed 09.02.2012.