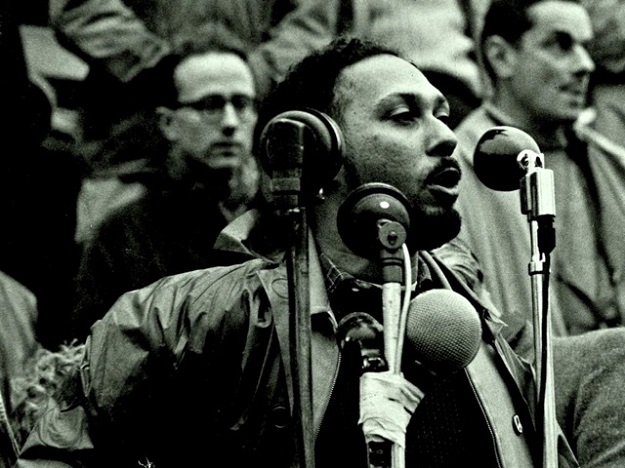 I first discovered Stuart Hall’s work through a screening of Black British filmmaker Isaac Julien’s Looking for Langston. It was 1990. I had just moved to New York from London and was in my first semester of graduate study, intoxicated by taking classes with heroes of mine like Edward Said, Anne McClintock, and Rob Nixon. I had also thrown myself into activism in New York, becoming a member of ACT UP, which at the time was engaged in a series of extremely militant actions against homophobic government and church policies around AIDS. The year before, Senator Jesse Helms had attempted to cut NEA funding for Robert Mapplethorpe’s queer photographs. In this milieu, the life and death stakes of cultural politics seemed crystal clear.

My friend Patrick, who knew that I was interested in Black and Asian British culture, invited me to a screening of Looking for Langston. The atmosphere at the screening, which was filled with friends from ACT UP, was electric. We watched an early cut of Julien’s film, with the lyrics of Langston Hughes’s poems still excised as a result of the Hughes estate’s opposition to the film. I was mesmerized by the sensuous beauty of the film, by its outing of the gay scene during the Harlem Renaissance, and by its critical take on relations between white and Black men in this scene.

I began writing a paper on Looking for Langston for Anne McClintock, with whom I was doing an independent study. She had given me her orals list, an amazing compendium of Black and queer feminist texts, which I had been devouring. After seeing Looking for Langston, I threw myself into research on radical Black British filmmaking collectives like Sankofa and Ceddo. At the NYPL, I came across an ICA booklet called Black Film, British Cinema in which I discovered incredibly exciting essays by Isaac Julien, Kobena Mercer, and, perhaps most exciting of all, Stuart Hall’s “New Ethnicities.”

Hall’s essay offered a tart riposte to the obsession with representation that dominated avant-garde academic circles at the time. Hall argued – with a patience that, looking back today, seems quite remarkable – that cultural representation plays a constitutive rather than merely an expressive role in social relations. As a key protagonist of British cultural studies, Hall would of course argue that cultural politics matter, but it was nevertheless very powerful, given the hegemony of Deconstruction in the US academy at the time, to hear him argue that “events, relations, structures do have conditions of existence and real effects outside the sphere of the discursive.”

In “New Ethnicities,” Hall also suggested that representation had two important facets. In the British context, the first aspect of representation that Hall highlighted was the essential marginalization of images of Black people in British culture. For the racist right wing of the day, in fact, the two terms – Black and British – were mutually exclusive, as Paul Gilroy’s brilliant There Ain’t No Black in the Union Jack, which I discovered shortly afterwards, suggests. This marginalization and erasure led to a struggle over what Hall called the relations of representation, a struggle perhaps best embodied in the demand for greater Black representation in British media that led to the establishment of the BBC’s Channel 4, which funded and screened films like My Beautiful Laundrette.

In addition to this struggle, however, Hall also discussed an unfolding conflict over the politics of representation itself. Here Hall alluded to the fact that “’black’ is essentially a politically and culturally constructed category.” The upshot of this realization was what he dubbed the “end of the innocent notion of the essential black subject.” Hall’s argument, in other words, opened up the category “black” by acknowledging the “extraordinary diversity of subject positions, social experiences, and cultural identities” of which it was composed. His argument resonated profoundly with me since the reading list Anne McClintock had given me was filled with Black feminist interrogations of white feminism and Black nationalism.

Hall’s essay went on to introduce what is now called intersectionality, arguing that “the end of the essential black subject also entails the recognition that the central issues of race always appear historically in articulation, in a formation, with other categories and divisions and are constantly crossed and recrossed by the categories of class, of gender, and ethnicity.” In the rest of the essay, Hall used these key theoretical interventions to examine Black British films such as The Passion of Remembrance and Handsworth Songs in which issues of difference within Blackness are contested, both through the overt feminist, gay and lesbian subject matter of the films as well as through their challenging cut-and-mix aesthetic form.

Hall’s essay helped make sense of Looking for Langston’s savvy unpacking of homophobia within Black communities in New York during the 1920s as well as its clear condemnation of the racism endemic in middle class gay culture. More broadly, his work also opened up an understanding of how race, class, and gender come into existence “in and through relation to each other,” to use Anne McClintock’s works.

This understanding of articulated categories helped me make sense of arguments being made by Hall, Gilroy, Hazel Carby, and other Black British theorists of the day concerning the centrality of race in the endemic social, political, and economic crises that unfolded from the 1970s onwards. In groundbreaking texts such as Policing the Crisis and The Empire Strikes Back, Hall and his students at the Birmingham Centre for Contemporary Cultural Studies had argued that the problems experienced by advanced capitalist nations such as Britain and the US in the 1970s were not simply economic, but that the crisis of over-accumulation became a political and a social crisis as well. Hall and his comrades explained in searing terms how this organic crisis was dealt with by dominant elites using a cultural politics of scapegoating and moral panic: if Britain was in crisis, the logic went, it must be the fault of (Black) immigrants. Race thus became a key mode of apprehending and coping with a far broader breakdown, with deadly results for Black and Asian communities in Britain.

Watching Looking for Langston with a roomful of activists from ACT UP, it seemed clear to me that Hall’s arguments about articulated categories applied just as much to constructions of LGBTQ identities. We lived in a time when US cultural politics were driven just as much by the fear of a queer nation as by racism.

While homophobia has been beaten back in significant measure in cultural politics since then, racist “solutions” to the crisis of capitalist social relations in Britain and the US are just as apparent today as they were when “New Ethnicities” was published. Indeed, neo-fascism is even more naked and mainstream in Britain and elsewhere in the European Union than it was when Hall wrote his groundbreaking work. Stuart Hall’s powerful analysis of the politics of representation is consequently more timely than ever. There is still a crisis and it is clearly still being policed.