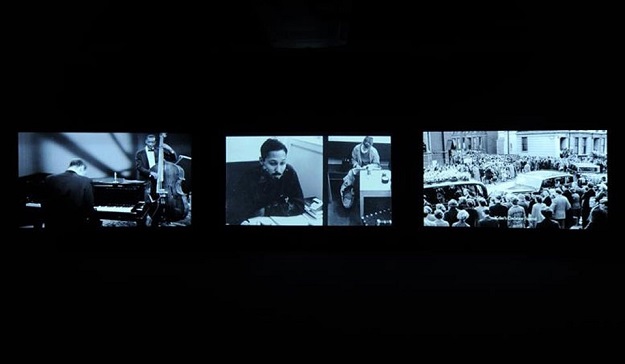 Stuart Hall, activist, writer, theorist and inspiration has died in London aged 81. It is not just a terrible loss. It is a time to reflect and a time to regroup. What was has gone or fallen apart. As we reclaim possible futures, we need to try and live up to Stuart’s example.

There’s a moment I often recall. In the early 1980s, I went to a meeting where Stuart was the speaker. It was a cold, wet Tuesday night. The meeting was in an old union hall under a set of railway arches. There were only a few of us there. Stuart spoke with as much enthusiasm and passion as if he had been addressing the General Assembly of the United Nations. He changed everyone’s life in the room.

Later when I was a beginning political journalist on the late Marxism Today–just the title makes it clear how long ago this was–Stuart was the leading intellectual light. His work was always late, always rewritten over and over again right up until the last minute. And then it broke over your head like a wave, refreshing, clarifying and a little scary all at once.

As early as 1977, Hall saw in an essay called “The Great Moving Right Show” how different what he called Thatcherism was from earlier forms of capitalist governance. He was widely derided for this, most notably by writers at the journal he had co-founded New Left Review. But when NLR began a new series in 1999, it took Hall’s position (without crediting him, it must be said).

Nearly forty years of neo-liberalism/ Thatcherism later, it has outlasted its most insightful critic. We owe it to Stuart to do better. Characteristic of his work was that, even as he never underestimated the radicality of the new Right and never spared the reader from realizing how far the implications would go, he also never left you without a sense of possibility. He always gave you the energy to do more. Without guarantees, as he put it. But also without conditions.

In my durational writing project Occupy 2012 I had the chance to write about the beautiful film installation Unfinished Conversations created by John Akomfrah about Stuart Hall’s life. It was a three-screen montage of moments from interviews, interspersed with archive footage, photographs and the occasional red screen. Hall described himself as “Scottish, Portuguese-Jewish and African.” Three screens. England tried to reduce that diversity to the singular “black” and see that as the taint of the negative. Hall made it into the cutting edge of British culture. He opened the door for Akomfrah, Isaac Julien, Kobena Mercer and so many more.

For those of us who were not quite white, Hall allowed you to think your own self in new ways. To imagine yourself as part of an unfinished conversation. Latterly, illness dimmed his voice and now it is gone. The conversation is not finished though. For we live, as Hall says in the film, in a time of “permanent revolutions.”

We’ll just have to take it from here. Thanks, Stuart. For everything.