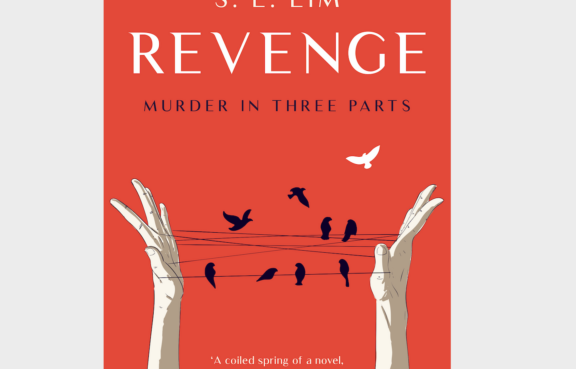 I write from the land of the Gadigal people of the Eora nation to address revenge in fiction and in fact—what it is, why it’s compelling, and how the concept might transcend its reactionary connotations to be part of a politics of liberation. I want to look specifically at the literary genre which depicts acts of fictional revenge, as distinct from non-fiction as revenge or auto-fiction as a thinly-veiled subtweet, where characters and plot are used to take a dig at real persons and events—the revenge I am concerned with is that which occurs in-universe, not in the author’s lived life. And I want to talk about this genre in the context of the act of massive imperialist violence which is climate change.

In trying to come up with a concept of what personal revenge is in contrast to any other response to a harm or slight, I came up with three criteria.

First, revenge entails pain; it entails violence. The pain is the point, not some disinterested concept of “deterrence” or “justice.” Causing pain, and also revelling in that pain, is intrinsic to revenge.

A final criterion is a mirroring aspect. Harm is done to you and you respond by enacting some symmetrical harm on the perpetrator. This is why we use the term poetic justice.

This idea of specifically “poetic” justice leads to another observation: revenge is very common in fiction and film, appearing across a range of genres, some of which seem to revolve around little else. But it’s not common in real life. You rarely find people nursing a grudge for forty years and then enacting bloody violence, as occurs in my novel Revenge.

In that novel, which is set in Malaysia and Australia, the protagonist, Yannie, experiences sadistic abuse at the hands of her brother as a child while both are growing up in the 1970s. This abuse goes basically unaddressed because violence within the family is not conceived as such. “All brothers hit their sisters.” There’s this idea that violence has to involve some breach of authority, be that the family or the state; otherwise, it is not real or morally salient.

We have recently witnessed this normalization of abuse and pathologization of its refusal in the United States: a cop can do whatever he chooses to a Black person and it is accepted as just and necessary, but when a Target burns in the ensuing protests it is declared violence.

I think of this in the context of climate crisis: the extraordinary suffering it entails and the uneven ways in which this crisis and that suffering is distributed. The Out of the Woods collective, of which I am now a member, has previously written of how climate change is not a shared catastrophe, of how catastrophe and normality can co-exist, and how borders are used to export the catastrophe and enclose the wealth that is generated via capitalist extraction. They have detailed how the global caste system of borders which enables this is naturalized, taken as a fact as opposed to a choice built out of thousands of daily acts of violence.

I wonder what this indicates about possibilities for a fiction of climate revenge, one which points the bloody finger at the culprits. I think the melodramatic register of vengeance is far more revealing of what is really going on than the ridiculous fantasies of an “orderly transition” that are being promised by the very actors of capital and the co-constitutive state that created and benefit from this crisis, and therefore could not possibly be trusted to solve it, even if they possessed the capacity to. We might point here to Fanon’s concept of decolonization as a program of “complete disorder,” of conflict and violence as an inherent companion in abolishing the present state of things.

So revenge in fiction can be an act of naming real violence. It gives us this truth, and this catharsis, through the form of a dream which avoids us needing to physically enact that violence. To be clear, I’m not inherently opposed to violence. But I want to put that aside for a moment and think about this process of dreaming and what it has to offer.

Out of the Woods, in reflecting on the scale of massive transformation needed to make any realistic impact on the climate crisis, has proposed we need to be anti-anti-utopian. The sheer scale of the changes we would need—the abolition of borders, capitalism, white supremacy— to avert disaster demand a kind of dreaming that has been denigrated as utopian.

I think this reflects quite a precious insight: dreams and utopias are not just about the future; they are also an intervention in the present. The nature of our dreaming changes what we do with the world we have, and that, in turn, shapes the possibilities we create. The word manifesto is literally that, an attempt to manifest something into reality by thinking it and putting it to words. Just as a utopia is an intervention of something seemingly impossible into the present in the form of a dream, so too is a fiction that dwells with revenge a form of unauthorized justice that often feels impossible or implausible under the current conditions.  It’s worth thinking through what the nature of this intervention can be.

This brings me back to the personal dimension of revenge, which, as I have suggested, involves both an intimate act of betrayal and an intimate response to that betrayal. By contrast, in the discussions of climate justice, you have these centrist, technocratic approaches which talk about abstractions like “policy” or “the state.” But no actual person is “policy” and no-one is “the state.” We are only ourselves, and these institutions arise as an emergent property from the interaction of our many selves.

So to draw a parallel: the revenge narrative takes the individual as its unit of analysis. In doing this it offers the possibility that the individual is where agency is located. And this is important because a materialist approach to politics is, by definition, concerned with things that actually exist. And how we feel and experience ourselves is real. So I want to think about fiction and literary fiction more broadly: what does this form have to offer for a politics of liberation?

This is nowhere near settled for me, but some thoughts:

The first is that all politics turn on one’s relationship with power, and here there are two approaches. On the one hand, you can see power as an exchangeable commodity which you can exercise use once you get your hands on it, like cash. Thus, if you obtain it—you get elected, you get an important job, you sign a contract with a big publisher for your book—you, through your personal virtue, can turn that power towards good.

Obviously, this notion of power is trash. Institutions eat people for breakfast. The last decade has seen the tragic expression of this notion from several high-profile climate “progressives.” Obama promised “hope” then ordered the gassing of Indigenous land defenders and their allies at Standing Rock. In the state of New South Wales, in the nation-state currently known as Australia, where I reside, Matt Kean, the Minister for Energy and Environment in the Labor government, promised to “follow the science” on climate and then turned around and opened new natural gas and coal extraction projects. When it comes to power, access to the formal institutions can only be gained via allegiance with political parties and other entities that are inevitably underwritten (or at the very least tolerated) by fossil capital. This illusion of power is not the same as a genuine capacity to act on the climate crisis. This idea that one can simply “grab” power like a neutral technocratic device is promoted in the popular superhero film genre, which always seem to revolve around the fight over some world-saving/destroying MacGuffin, the plot of seemingly every Avengers movie.

If, on the other hand, you have a different theory of power and recognize that it is nothing more or less than ourselves, our relationship with our own values and accountability to comrades who share those values, then how we feel and relate to each other is fundamental to achieving liberation. And that is where revenge and other literary fiction can teach us how it feels and what we have to go through to “get free” by telling us an interior story.

So one last thing about revenge narratives. These often cover a long time, maybe a span of decades, which is much longer than the life of, say, an electoral campaign. There is resonance here with radical politics. Out of the Woods has been very inspiring for me in this regard—situating struggles against the border, against colonialism, against capital, in the context of a world which has changed before and will change again. There was another “energy transition,” the abolition of chattel slavery, and it was accomplished imperfectly and with great loss. And yet it was accomplished. Each moment, and each world, feels like forever while you’re in it. But it is not. And when we write, whether we write fiction or we write something more explicitly political, we are in conversation with the dead, and with the living, and with those who are not yet born.

And one last thing about art: cultural production and consumption aren’t the same as revolution. But they don’t exist in a separate realm from our material lives and struggles. They are shaped by those struggles and have the potential to shape them as well. What we experience and how we feel and understand ourselves and other people and things is material—which is to say it exists in the world and has consequences for that world which are not solely interior. Out of the Woods has written of a practice of “reading, writing and fighting as if they were never separate to begin with.” If the revenge plot is about love and death, perhaps there is a role for a fiction of revenge in the climate crisis—telling the story, even as we live it, of who we need to love and who we need to kill if we want to get free.

S. L. Lim is the author of two novels, Revenge and Real Differences. Their poetry has appeared in the journals Capitalism Nature Socialism, the Portside Review, Burning House Press, and in anarcho-zines. They are a recent addition to the Out of the Woods collective, a small-c communist formation investigating the twinned nightmares of capitalism and climate change. They are based in so-called "Australia" and can be found at slwritesbooks.com.