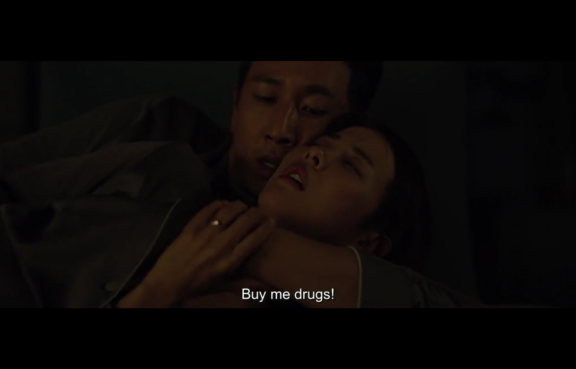 In capitalist society, free time is produced for one class by the conversion of the whole lifetime of the masses into labour-time.

You see, the video that I really want to watch is a snuff, a snuff film in which you appear as the main character.

—Kim Eon Hee, Have You Been Feeling Blue These Days?

When I saw Parasite in 2019 in Seoul it had already won the Cannes Palm d’Or. Even then, I could never have predicted that the film would go on to be so popular worldwide. When it won the Oscar I began to wonder in excitement and disillusionment: is there a wide-reaching consensus with C. L. R. James, that the rich are only defeated when running for their lives, as in, will the global insurrection against the billionaire exploiting class be executed sooner rather than later? Or is Marshall McLuhan correct in theorizing that the medium is the message, and the medium of film constricted and ineffective; depoliticizing and thus, counter-revolutionary?

The film I saw was like Bong Joon Ho’s other films: openly anti-capitalist and anti-imperialist. The director/writer has made a number of films throughout the decades, from The Host, about the US military’s creation of a bio-monster, to Mother, which traces the violence of poverty, familism, and the contradictions of maternal love. Thus I expect his films to be of a “left” Korean cinema that centers class antagonisms and visualizes the exploitation of neoliberal capitalism.

I state this at the outset to reject those who have read Parasite as Hollywood film noir, of a Hitchcock allegiance or a shocking thriller devoid of politics, and to provoke the question of whether the popularity of the film situates a moment in history in which there is movement away from Foucauldian forms of dispersed unknowable power, and towards a momentus engagement with explicit class-based and neo-colonial violence. This call to witness and engage directly with exploitation against abstracting theorems is pulled from David A. Spencer’s analysis of the impact of Harry Braverman’s labor process theory. In assessing over twenty-five years of disengagement with Braverman’s writings, Spencer questions how scholarship that refuses to tend to class disparities—and rejects naming class enemies in order to exclusively fixate on how workers participate in their oppression, or in analyses where power is only metaphorical and elusive—contributes to upholding the status quo and dominion of capitalist exploitation. Against this milieu, might Parasite be a ruse to consciously or unconsciously engage in explicit forms of class antagonisms, again and anew?

I want to lay out a narrative prompt that contributes to the atmosphere of unknowable power and endless nuance, in order to break open a window into fantastical, radical violence. In The Meritocracy Trap: How America’s Foundational Myth Feeds Inequality, Dismantles the Middle Class, and Devours the Elite, published in 2019 to rave reviews and increasing popularity, Yale Law professor Daniel Markovits updates Thorstien Veblen’s thesis in Theory of the Leisure Class to argue that aristocracy has been replaced by the system of meritocracy, where the rich remain dominant through the artificial restructuring of educational forms, which provides them the discourse of merit and in this, they work more as other work less: this is their design. He cites the fact that high paying jobs such as finance, law, and tech, include the veneer of innovation (i.e., the creation of more jobs for more of them), and how the performance of work exhaustion constitutes this phenomenon. People in these professions work a lot and through this enforce the idea that they deserve to stay in power. This structural synthesis of class domination, however, leads Markovits away from an analysis of class antagonisms to the strange conclusion that the system of meritocracy also “ensnares” the rich, as in, it makes their lives unhappy. He locates his narrative shift from aristocracy to meritocracy as specific to the US, some regions of western Europe, and South Korea.

We can see variations of this précis play out in Parasite, which centers a family of four—the Kims—who live in abject poverty, and their pursuit of life/employment. In their search, the son Kim Ki Woo is introduced as an English tutor to Park Yeon Kyo, the matriarch of the wealthy Park family. Ki Woo becomes the tutor to the daughter Park Da Hye, and the Kims devise and execute an elaborate plan for the family to be employed by the Parks, from art teacher to chauffeur and full-time housekeeper.

In their commitment to remaining at the top of class hierarchy, the “simple” and “young’” mother Park is obsessed with overqualified and overpaid tutors. The Park children receive top-tier assistance because they must excel in their education. They will be the best students because they have the resources to be the best, and in being the “best” the position of wealth and domination is legitimated. Likewise, the patriarch Park works a lot. Equally following Max Weber’s synthesis and Rey Chow’s update on the protestant ethic and ethnic, Park is no longer an aristocrat who displays his wealth by not working, but rather his wealth is authorized through his position as the ineffable tech entrepreneur; his spends his time “working” as the other people’s work. The couple enact a true capitalist partnership where the matriarch manages the help and the patriarch manages the employees. Their position as members of the elite echelon is recognized because their work is the management of others.

In contrast, the Kim family’s conflict is located in how they cannot find stable work. They are considered un-and-under-qualified, and this too, is by design. They are without “legitimate” degrees, experience, they are outside the discourse of merit which means they are outside the bounds of deserving. With this being said, I want to hone in on a scene that amplifies the dynamics of class antagonisms , to reject the reading that suggests that meritocracy ensnares the rich.

The film sets out the key conflict as between the Kim and Park families, and then also sets up an intra-conflict between the Kims and the subterranean and basement-dwelling couple Gook Moon-Gwang and Oh Geun-sae. It’s within this setup that we receive the singular sex scene between patriarch Park and his wife.

Just moments before this scene, a fight between the Kim family and the couple Moon-Gwang and Geun-sae breaks out. The couple in the basement become injured and remain trapped below, while the Kim family are above and hiding underneath the coffee table, waiting for the opportunity to escape. They cannot however, since, like the couple locked below, the Kims are trapped by the presence of the Parks. The son is outside in his imported tent play-acting colonialization in stereotypical red face: from the constructed headdress, to clothing and more. The mother and father lay on the couch, first remarking on the “smell” of the driver and then move to recounting the story of their previous chauffeur, who, according to them, was a drug user and car-sex-haver. Unfortunately for the chaffeur, he was neither. This story, however, is the fable that legitimated the Parks termination of him.

The fable of the chauffeur is part of the Kim family’s original infiltration/employment plan. The Kims planted artifacts to support this tale, from underwear and unknown substances in the car, to gossip about the driver’s creepiness. The Kim family laid out details in anticipation, with the understanding that even the slightest suggestion of non-normative/criminal behavior would be weaponized against the young chauffeur. But here on this night, the narrative is conjured up by the Parks as they get off, prolonging the Kim family’s entrapment. The husband and wife take turns repeating parts of the story about the former worker (cheap panties…if you wore those) as they touch each other (buy me drugs), enacting the mise-en-scène in which we witness the rich getting off on the catalyst of their employee’s termination, the story that convinced them to fire, that provided them the rationale to disparage and unemploy. Quite literally, their instrumentalization—which includes the ability to impersonate the help—gets them off. Facing away from each other and towards their son, the couple masturbate each other in unison. As if accustomed to this act, they use words like “dirty” and “cheap” while moaning—and remember, all under the presence of this smell, the scent that they described as poor, old, before settling on “걸레,” a dirty rag, which is also a colloquial term for “slut” in Korean. The family underneath the coffee table hold their breath as the head patriarch Kim grimaces.

If the discourse of meritocracy legitimates the dynamics of neoliberal capitalism by creating a wealthy class who, by design and through the forces of domination, maintain and usurp pre-existing measures of “deserving” through secure employment—which then justifies the exploitation of others on the basis of their unworthy, incapable, un-employable, subcontracted, and thus criminal, lives—here we have the dynamics of the rich taking pleasure in the power to execute this narrative, mitigating Markovits’s insistence that meritocracy too negatively entraps the wealthy. Here the rich feel pleasure navigating their narrative construct, in both their cosplay as criminal and non-normative, and in the power to hold and deem someone criminal, non-normative, and thus, unworthy of work/life. This scene constitutes how domination of the poor is not simply a position, but a position of play and pleasure for the ruling class. It is no accident that, following this scene, we witness how poverty and underemployment make the Kims’ family life not merely untenable, but deadly.

I leave this last scene: the Kim family is displaced by a flood, and after having spent the night in a public shelter, return to the Parks’ to work at their son’s settler-colonial-themed birthday party. They are not there for leisure, they’re there to work and act in the rich’s play. And so it is during and because of work that the daughter Kim Ki Jung, or as she’s known at work, Jessica, is murdered (a work fatality). Thus, it is also during the scene of managerial employment in which Patriarch Park must die. Here, the antagonisms are not imagined unilateral sites of pleasure, but reciprocated if not requited: the worker who kills the manager at his site of leisure is an old and new fantasy for us to fuck with, some more.

Eunsong Kim is an assistant professor at Northeastern University. Her monograph, The Politics of Collecting: Property & Race in Aesthetic Formation (forthcoming from Duke University Press) materializes the histories of immaterialism by examining the rise of US museums, avant-garde forms, and neoliberal aesthetics to consider how race and property become foundational to modern artistic institutions. Her writings have appeared in Lateral: Journal of the Cultural Studies Association and Journal of Critical Library and Information Studies, amongst others. She’s the recipient of the Ford Foundation Fellowship, Yale's Poynter Fellowship, and a grant from the Andy Warhol Art Writers Program. In 2021 she co-founded offshoot, an arts space for transnational activist conversations.