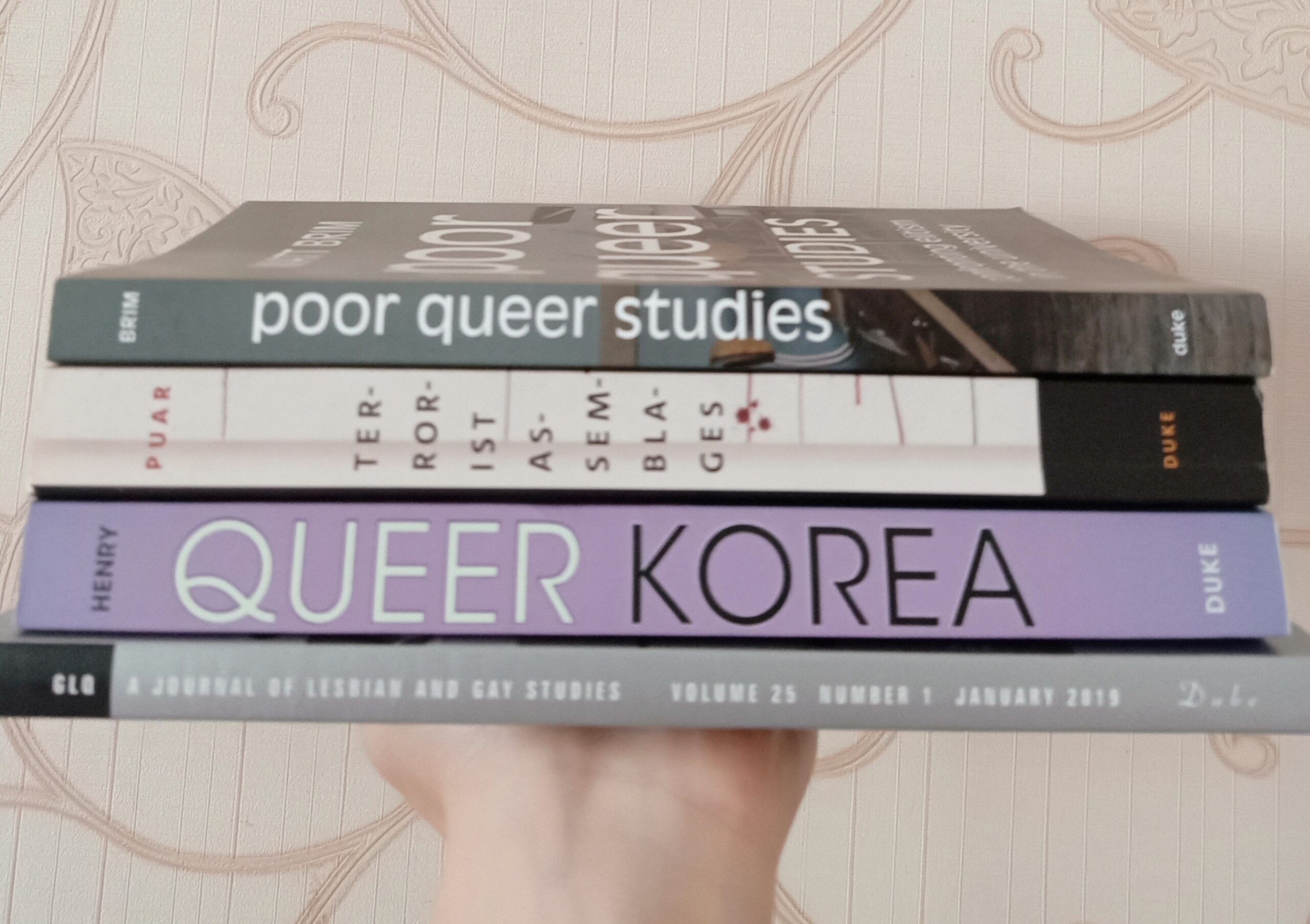 In the postscript of the tenth-anniversary edition of Terrorist Assemblages (2017), Jasbir K. Puar laments how queer theory, inseparable from American Studies knowledge production, appears unmarked and is often perceived as transcendent and applicable across different geographical and cultural domains (226). This March, such a transnational critique of provincialized queer theory is further extended and fortified by Matt Brim’s Poor Queer Studies (2020). Looking at queer studies as a project embroiled in disciplinary affiliations within the university-industrial complex, Brim uncovers the way that unequal distributions of material resources have produced “class- and status-based knowledges that cannot be universalized” (17) across different US universities.

Reflecting on his experience at the College of Staten Island, Brim centers not only broken projectors (2), vending-machine junk food (2-3), a paucity of research funding, and a long-commute by ferry (199-202), but also underclass students and student mothers (135-158) as the linchpin of poor queer studies. In other words, Poor Queer Studies attends to both the myriad infrastructural challenges and to the desires of working-class students to improve their work lives as workers (105). In contrast, rarely delineated and explored in what Brim labels rich queer studies is that the imbrications of queer studies in the top (and, of course, wealthy) school programs often perpetuates class- and status-based hierarchies among the graduates and academics, evident in the hiring of graduates from top schools with attachments to ‘superstars’ in the field (83-85), among others. As a result, rich queer studies disengages its intellectual and pedagogical commitments from the need to prepare students to deal with the labor market beyond the academy. Graduates need to sustain their lives, find a job, and survive in this neoliberal, homophobic, and racist climate.

In this brief post, I transpose Puar’s and Brim’s cogent critique to Indonesia, the Muslim-majority democratic country, to examine the life of queer studies outside of the US. The term homeless here is useful to show the absence of the institutional and disciplinary home of queer studies, along with the stigma and risk faced by the scholars. I argue that poor queer studies should adopt a transnational critique. Not only would this convergence help to disrupt disciplinary parochialism, but it would also reveal the disparities of pedagogical access and infrastructures between US queer studies and non-US queer studies. Notably, I use the term queer studies here in a more flexible way to refer to any pedagogy and scholarship on queer subjects.

My recent experience of being invited to give a brief lecture on queer studies at a legal aid community organization makes me more cognizant of the “homelessness” of queer studies in Indonesia. Another relevant anecdote comes from my experience as a guest lecturer in some public universities in 2015 and 2016. While signaling the growing interest and support for queer studies in the academy, this opportunity nonetheless entailed structural and cultural challenges that demand attention. First of all, I was able to teach because the tenured academics there opened the door for me, which in turn put them at risk of being stigmatized and ostracized by their institutions and colleagues. They courageously integrated queer studies into one or two sessions in their course—for example, counselor education, social psychology, English literature, cultural studies—because they saw education and knowledge as a means to challenge prejudice and stigma around queer sexualities.

Still vivid in my memory is how we worked together to develop a guest lecture poster with a “soft title” for the students to avoid any potential controversies. That time, we used the term queer instead of LGBT. We were afraid that the term LGBT would trigger a backlash from the public since it has been associated with Western identity, immorality, and contagious behavior. For instance, in 2016, the Technology, Research and Higher Education Minister, Muhammad Nasir, clearly made a public statement to ban “LGBT people” from campus and forbid them from showing affection in public space. In the context of such growing hostility, an academic recently told me that she still teaches and integrates queer stuff in her course but using stealth mode. Again, this is to circumvent the potential controversies that might arise if she taught queer studies openly. Important to note here: being an “out and proud” queer academic would also be detrimental to one’s career and life.

The further cost of such invisibility and cultural stigma is the scarcity (if not the nonexistence) of funding for academic research, tenure-track employment, and other scholarly endeavors on queer stuff from the government. In the recently published Queer Korea (2020), Todd Henry also observed similar circumstances in South Korea: “…Many graduate students…continue to produce scholarship on queer subjects without any promise of future employment” (ix). And almost like in the Indonesian situation, their work “will likely be misunderstood, devalued, and even shunned” (ix), and thus, considered to be less serious scholarship than any other research subject.

Without significant resources, queer studies from the “local” cannot easily succeed in its critical dialogue with Western queer scholarship and establish itself as a field of study considered seriously. To be theoretically engaged and listened to, one must publish. To get published, one must be not only fluent in English but also proficient in queer theory literature, mostly written in English and published by the academic presses or trade publishers with a high price (at least, in relation to Indonesians’ living standards). Without adequate English language skills and understanding of the genealogy of “Western” queer scholarship, it is improbable for local scholars to engage in a meaningful way. Making the problem worse is the absence of these books at both public and university libraries. No wonder, then, if only a handful of local scholars are able to buy this literature and publish. And ironically, many local queer activists themselves cannot access this literature, which could be useful to inform their activism.

Indeed, it is tempting to say that the scholars could still publish their work in local journals. This idea brings us back to my point about cultural stigma. Only a few scholarly outlets consider research on queer stuff seriously. For example, Indonesian Feminist Journal (Jurnal Perempuan) is one of a few nationally accredited journals that continues to publish queer research, though the size and number of its queer publications are not as bountiful as its women’s studies-related writings.

All these hurdles render it difficult to practice queer studies outside the established academic norms. Community organizations often organize public discussions about queer issues to the point that they also publish magazines or journals. Graduates, who studied abroad and were in touch with queer studies (albeit dispersedly), are often called on by community groups to share their knowledge. For example, from 2010 to 2011, GAYa Nusantara, an LGBT organization, released its critical sexuality studies journal in the Indonesian language called Jurnal Gandrung. Though short-lived, this journal published local scholarship and translated English articles about Indonesian queer stuff written by Western academics. Many queer Indonesians I encounter explain the importance of queer knowledge to affirm their identities and to challenge the heteronormative regime. In this case, echoing what Brim writes, queer studies can “enable people to recognize and confront the conditions” (116) of their personal lives that “undermine them as queer…people” (116). One thing to highlight here is the ongoing risk of “provincializing” Indonesian queer studies that would hinder its critical engagement with queer scholarship outside the country due to language differences.

Of course, this article does not aim to provide the solution to this complex issue. What I show here is that the marrying of Brim’s poor queer studies and Puar’s transnational queer critique reveals the transnational disparities of material and cultural access of queer studies, or more precisely, between the US and Indonesian landscape. Consequently, and in the end, the dominance of US-based queer studies cannot be challenged without giving serious attention and opportunities for non-US-based (and non-English speaking) queer scholars to engage transnationally in a more meaningful way. Perhaps, this is the unfulfilled promise of queer studies in what Jack Halberstam describes as “the coloniality of the academic world in which English is the lingua franca” (xv): the “permanent revolution” (8) of queer studies and its publications must take into account “queer research and politics from outside North American and Europe” (8), including the possibility to publish non-English language work, as David Halperin and Carolyn Dinshaw suggested when launching GLQ: A Journal of Lesbian and Gay Studies. And I am still waiting for that promise to materialize.

Hendri Yulius Wijaya is an Indonesian writer and the author of Intimate Assemblages: The Politics of Queer Identities and Sexualities in Indonesia (Palgrave Macmillan 2020). He completed a research master’s degree in Gender and Cultural Studies at The University of Sydney and a master’s degree in Public Policy at Lee Kuan Yew School of Public Policy, National University of Singapore. He writes about gender, sexuality, and popular culture for a mainstream audience in Indonesia.