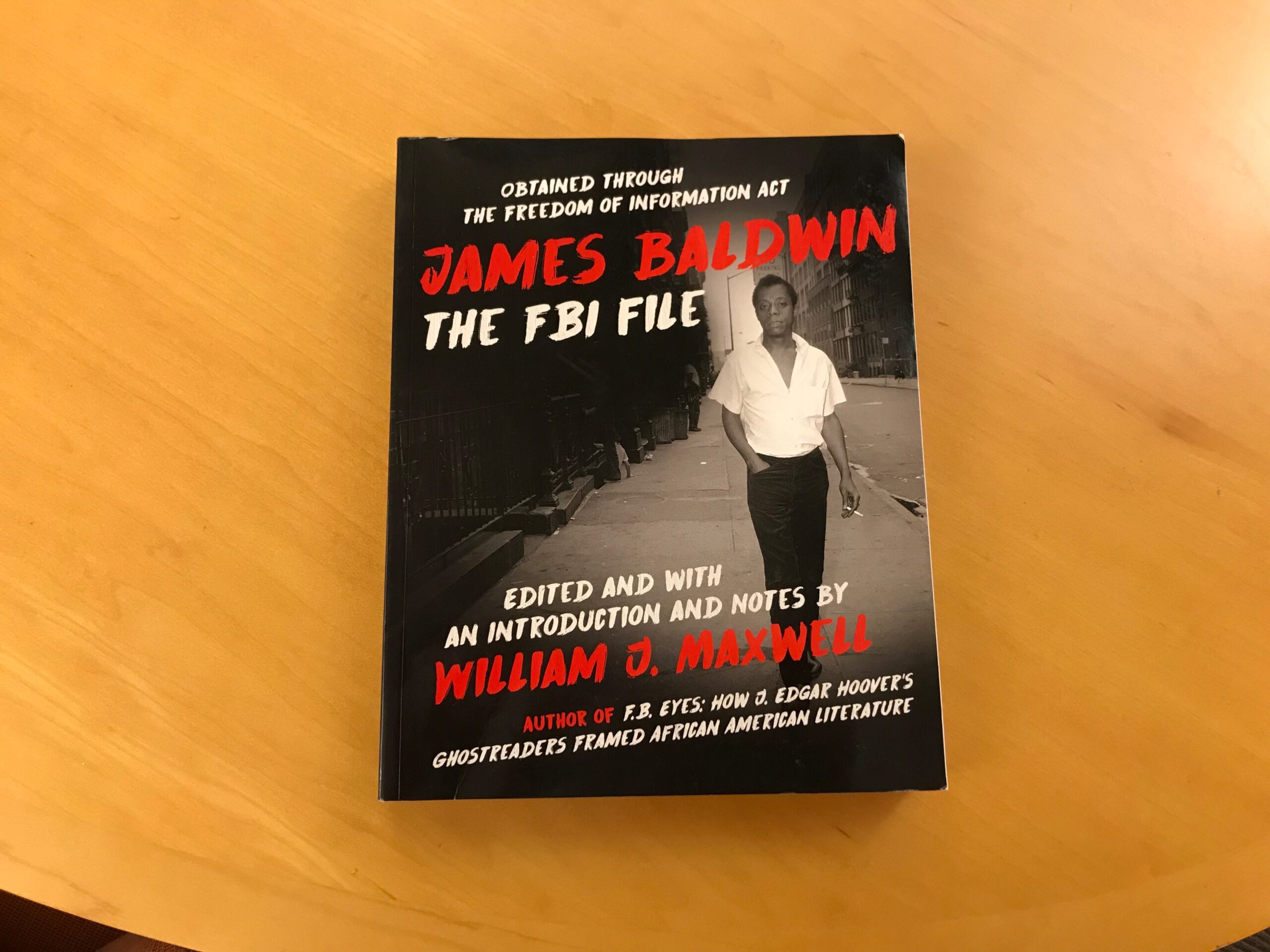 “Isn’t Baldwin a well-known pervert?” So wrote FBI Director J. Edgar Hoover in a 1964 internal FBI memo, a single page in a file that extended to more than eighteen hundred pages, the largest ever kept by the Bureau on an African American writer. The comment bleeds portent and irony endemic to the FBI project of surveilling James Baldwin: Hoover was inciting the troops by calling Baldwin out as a ‘faggot,’ despite being himself the best-known closeted gay man in Washington, DC. Yet Baldwin was already being surveilled in part for his sexuality—a 29 May 1963 FBI Memorandum speaks of him as a “homosexual” who has “made derogatory remarks in reference to the Bureau.”

But as the latter portion of the preceding sentence indicates, it is the verb form of Hoover’s carefully chosen slur that most fully captures the meaning of James Baldwin’s dissident life: Baldwin dedicated his life to altering, to skewing, to perverting the power of the US state and Western empire so as to enhance the capacity of those he deemed the wretched of the earth—including poor Black boys from Harlem like himself—to determine their own historical destiny.

Indeed, the editor of this snappy, thrilling, disturbing historical volume of samples from Baldwin’s FBI file has made this point differently in his book F.B. Eyes: How J. Edgar Hoover’s Ghostreaders Framed African American Literature. There, William J. Maxwell argues that FBI surveillance and its “close reading” of poems, plays, letters, and novels by Black American writers often yielded complex, and sometimes true, understanding of their most radical intentions. Maxwell shows, for example, that, by reading his poem “If We Must Die,” the Bureau caught on to the fact that Claude McKay might well be sympathetic to Communism–years before the mainstream public, or even the literary world, knew that to be true.

In Baldwin’s case, the Bureau’s tracking was less of Baldwin the writer than of Baldwin the activist, organizer, agitator, and orator—“God’s mouthpiece,” Amiri Baraka called him. As Maxwell recounts, the FBI opened its file on Baldwin in 1958, five years after the publication of his autographical first novel, Go Tell It on the Mountain. It was the same year he completed a trip to the South on assignment for Partisan Review and Harper’s Magazine. Baldwin was there to interview children attempting to integrate public schools in North Carolina and to see Martin Luther King Jr. in Atlanta. Viewing Baldwin’s trajectory as a whole, the synchronicity of the Cold War, percolating southern civil rights, publication of Baldwin’s “gay” novel Giovanni’s Room (also 1958) and Baldwin’s physical return from Paris to a roiling American South were likely the coordinates of the Bureau’s decision to keep an eye on him.

He did not disappoint. In April 1960, the Bureau reported that Baldwin was one of the sponsors of an advertisement by the Fair Play for Cuba Committee, a pro-Castro group, in the New York Times; in June 1961, Baldwin spoke at a mass rally of the Washington, DC chapter of the Congress of Racial Equality; that same month, Baldwin spoke at a Liberation Committee for Africa meeting in New York. At the meeting, the Bureau officer reported, Baldwin argued that “only in revolution will problems of this country be solved.”

The FBI reports of Baldwin’s 1960 political movements are interesting in several ways. First, his support for Cuban and African liberation help us backdate the underappreciated influence on his life of the Algerian anticolonial war that exploded in North Africa (and Paris) while Baldwin was living in Paris in 1952. In his 1955 essay “Equal in Paris,” for example, Baldwin described spending nights in a Paris jail cell with mainly North Africans, a moment that helped Baldwin develop comprehension of the impact of colonialism and imperialism on the wider Afro-Arab world.

Second, Baldwin’s grassroots activism predates by two years publication of The Fire Next Time, the book remembered by history as a turning point in Baldwin’s political radicalization. By FBI definition, Baldwin was already radical, and should be understood similarly by us: The Fire Next Time’s complex but ultimately sympathetic account of Elijah Muhammad and the Nation of Islam had already been tendered in the prisons of Paris and streets of Harlem, even before Malcolm X famously set the latter on fire himself.

Not surprisingly then, events of 1963 and publication of The Fire Next Time threw Baldwin and the FBI into open warfare. When Baldwin learned that the FBI had discovered through wiretap his plans to “nail them to the wall” for their failures to protect civil rights protesters, Baldwin publicly cast blame on the Bureau for the September 1963 bombing of a Birmingham Church (carried out by Klansmen) and said African Americans had “no cause to have faith in the FBI.” Baldwin also made immediate plans, never completed, to write a book about the Bureau, The Blood Counters, a fact which helped trigger Hoover’s homophobic screed with which I began.

Hence a jewel of insight from Maxwell’s book is that Baldwin converted the “cat and mouse” game of FBI surveillance into something like Spy vs. Spy: he was as watchful of them as they of he. In this sleuthing capacity, Baldwin was a unique moving target. For one, he chose to live outside the US for long periods of his career not just to avoid American racism and homophobia but to eavesdrop and comment on it from a safe distance. (Paris and Istanbul were his two long-term foreign addresses.) Second, while accused by the Bureau of being a “Communist,” Baldwin maintained a public position as an anti-Stalinist leftist and sometime “Socialist,” as in his 1972 book No Name in the Street, drawing inspiration simultaneously from his brief 1940s foray with the Trotskyist left and from the Black Panther Party.

Baldwin was removed from the FBI’s Administrative Index in 1974, his “propensity to violence,” the Bureau stated, no longer a threat to national security. Yet, ironically again, it was Baldwin’s scathing denunciations of the state security apparatus—especially the police—that well outlived his FBI file. Baldwin’s rediscovery by the Black Lives Matter movement as critic of police racism and violence—the police, he wrote in 1966, are merely an occupying force in Black communities–is one of his most important political legacies to date. Maxwell’s spectral volume is thus a testament to the Bureau’s prophetic interpretation of Baldwin’s welcome perversions, and his escape into the pages of living history a wondrous sign of the fugitive nature of Black radical thought in America.

Bill V. Mullen is professor of American studies at Purdue University. He is author most recently of W.E.B. Du Bois: Revolutionary Across the Color Line (Pluto Press), and he is at work on a political biography of James Baldwin.