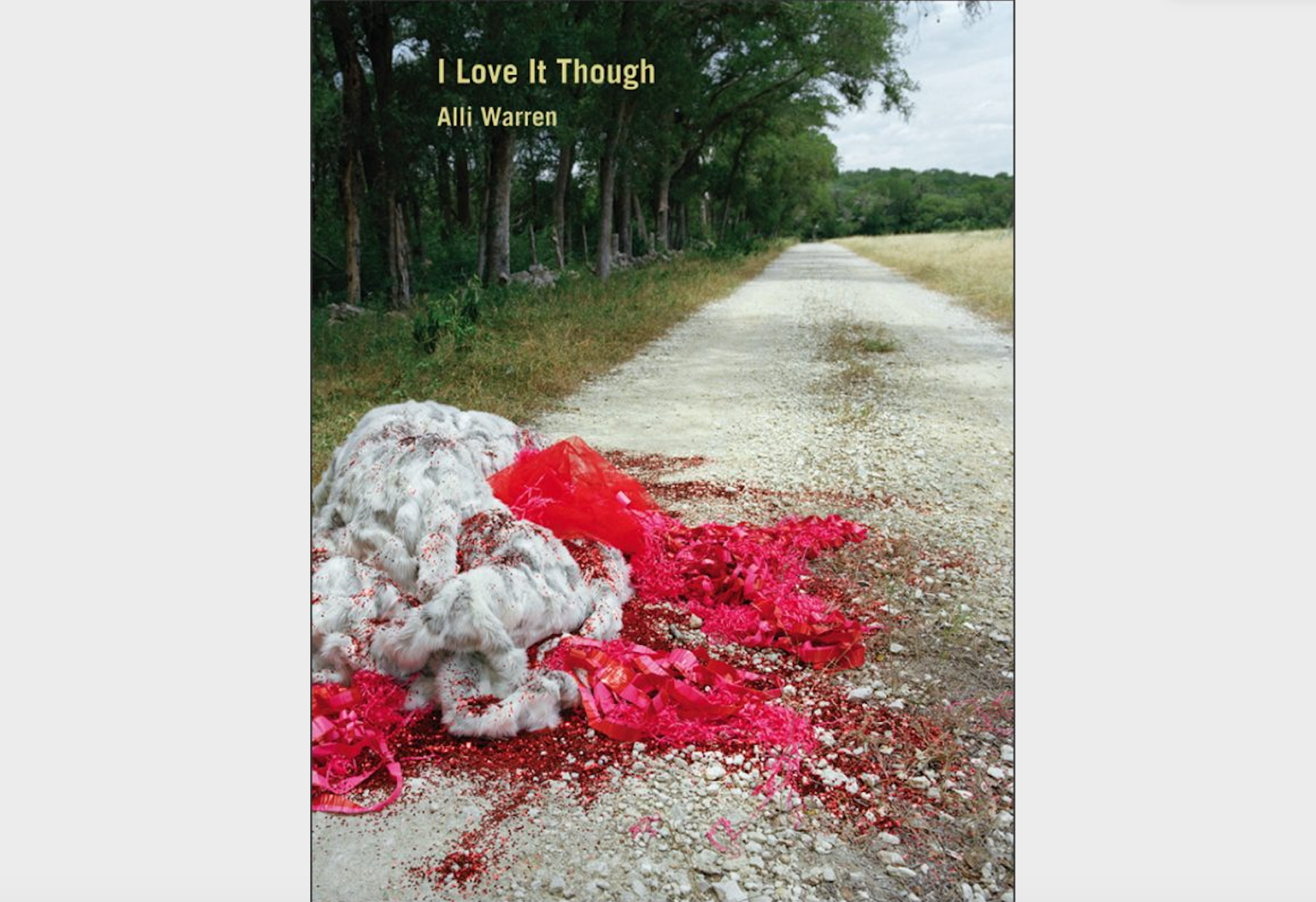 In her recent book of poetry, I Love It Though (Nightboat Books, 2017), Alli Warren looks at the world skeptically as she explores the nature of desire and the sublime in the present. Warren describes desire for a utopic, alternate world and the way that that desire is compromised by cultural and ideological factors. Pleasure is often tainted by class, power plays, and gender wars. We are products of our time and there is no escaping that. Warren says in an interview with Dustin Williamson published in The Coil Magazine on July 16, 2018:

I don’t think there’s any unadulterated, natural, or authentic self where desire is pure. The poems deal with this entanglement, and yet they are not free from a utopian, impossible wish to (re)gain access to some form where feeling and meaning are simple and clear.

Desire is complicated and in retaining that complexity in her work, Warren gives it the sense of a life in the process of living, a mind moving in the language and critiquing the world on its own terms. Instead of giving easy answers, she complicates the questions when thinking of an alternative to this world, something that the poem gives voice to and thus can embody. It’s a real world she’s speaking of even though you can only feel it. Longing is stronger than control. It is open-ended and resists closure and finality. The invisible nurtures the speaker because what is visible is subject to definition, categorization, manipulation, and decay. Warren’s vision of the world is one of “revelation instead of simple clarity” (1).

The first poem, “A Yielding Hole For Light,” sets the tone for the entire book. Warren writes:

I tell BB what I want around me
are the ripe and tender ones
wine the color of weather
the lush bearing of our longing
going on in my way, stupidly sincere
one foot in the office the other lolling
about the field, do you prefer the gravel
to the scrub grass? I prefer the ear
to the throat, calling choice
what’s ancient (1)
…
I want to be able to continue
to love to stay alive
the epigraph belongs to Gloria Gaynor
the green pervades, it’s a diamond, we all are (2)

In the title, a “hole” is something complete, defined, circumscribed; the word also suggests a kind of void or tear in the fabric of reality; “yielding” suggests giving over to pressure, not to be hard or rigid. This is the fluidity necessary for the light to pass through: a moment of enlightenment produced by a rupture in the present system of thought, which allows for new ideas to flow. This gives rise to the sense of pervading green (suggesting nature, renewal). And yet the word green is also simply the color green as the diamond is just a diamond. What I mean is that in Warren’s poetry, the material qualities of the language also contain that which is beyond the language; the spirit is in the material.

A running theme throughout I Love it Though concerns the way in which we are taught to categorize, define, map, bind, and thus limit our views of the world. But Warren is interested in a way of being open in the world:

In “Palpating the Scar” Warren speaks of “brimming at the limit oozing / hole where the heart should be.” Here is the idea of hole as void, a recurring trope in the book, as painful absence, or lack. She speaks of “they” which suggests a solidarity with her friends who all suffer from a common ailment in the present world-system and refers to “all the usual palliatives”: the false cures which are unable fix the wound in the usual manner given our present society.

Warren’s idea of a political space is one that essentially obeys natural processes. She writes about the vow to be

Here in the poem a space is opened where things are bartered for and where our emotional and physical life obey a cyclical process like nature. But then the next line after “could a polity” trails off; Warren is unable to reach a conclusion, or articulate what, in some respects, must remain unsaid :

I sing of something that cannot speak its name
though its signature is everywhere
Of sentimental feeling
and immaculate behavior.

Up to this point the language of the poem is that of government and finance (“Indeed how much gold / bespoke the rope / we dangle from” and “the loot’s the problem”). The poem is left with the auxiliary verbs “could” and “would” hanging on the edge of a visible world.

The ability to speak and write makes us aware of the limits of language, of how language fails to represent our desires, and it this lack, this hole (or void) that produces longing. In the poem, “In the Craving Night,” Warren writes:

It is a problem that rests on our ideas of education. Warren continues: “but greet this hole / born of sound / bigger than circumstance.” She desires “the order of the clouds” and “the animated world of love in her youth.” The speaker’s idea of order is fluid and changeable, like her idea of a youthful love, rather than one that has become rigid. The speaker desires “a collective wilding” that “tongues the trunk,” suggesting an erotic and linguistic relation to the natural world, which she presents as a revolutionary act. In “On the Levelers Everyday,” she also speaks of revolution in the public sphere with a wink: “Let’s loot the establishments / I mean feed each other.” And it is this revolutionary desire that is at the center of the following lines from “Slantwise on the Skyline”:

But the skeptic realizes that such desire is not pure but tainted by ideology, gender relations, and power plays. All of which act as external noise:

The line “Sound only exists as it is going out of existence” takes on additional meaning here. Paradoxically, the unsaid, or unheard, does exist in an alternate space, in the invisible, and does not die, which is why listening is so important: what exists comes to the speaker in the form of a poem from the Outside. It nurtures the speaker and gives her strength to cope. And her skeptical nature keeps her own her toes.

Alli Warren’s I Love It Though is a subtle and complex work that rewards repeated readings. Desire and love are complicated by the narrowness of gender, class systems, and problems with control and domination, all of which taint and complicate pleasure: “Where is the net which saves / rather than traps.” The following is from Warren’s interview with Lauren Levin, published on May 25, 2017 in the Los Angeles Review of Books:

I can’t think of a post-capitalist world without considering the relationship of violence and domination to eros and eroticism, to coupling and ownership. I want my poems to hold that complication, to express embodiment, sensuality, and physical desire without simplifying my relationship to sexuality, which feels social, cultural.

It is this desire for an alternate world and the discussions it gives rise to that produces in the speaker and her friends the sustenance and inner strength to deal with the daily pressures of living under the present world-system, where they suffer “in relation to each other because…of the ways class, race, gender, etc., are oppressively organized.” Warren complicates the contemporary discourse while maintaining the resulting tension; this gives her poems the feeling of a life being lived in the present. I Love It Though is exactly the kind of book we need these days so that we can see clearly in the gathering dark. Alli Warren is a poet I’d trust to lead us through.

Peter Valente is a writer, translator, and filmmaker. He is the author of eleven full length books, including a translation of Nanni Balestrini’s Blackout (Commune Editions, 2017), which received a starred review in Publisher’s Weekly. Forthcoming is a collection of essays, Essays on the Peripheries (Punctum, 2020), and his translation of Nicolas Pages by Guillaume Dustan (Semiotext(e), 2021). He’s presently working on editing a book on Harry Smith. Twenty-four of his short films have been shown at Anthology Film Archives.